Haven’t had the best of weeks lately. Thank god I’ve got this despair-inducing game to keep me company.

Welcome to the Danganronpa V3 Diaries, where I basically “episodically blog” my experiences with the newest Danganronpa game as I play it. If it wasn’t obvious by now, I’ve been a massive fan of the franchise since last year when the Danganronpa 3 anime fully inducted me into the universe after a brief skirmish with the first anime adaptation in 2013, so you can bet that this new installment was one of my most anticipated games of the year behind Persona 5 and…actually that’s it. I’m always wary of a franchise outstaying its welcome, and unfortunately a bunch of people have told me that this game is the most divisive installment so far, which is saying a lot given how many people consider the DR3 anime a disappointment. But my mind works a lot differently from most people (I don’t care too much for continuity, I don’t care for realism as long as the story is interesting) to the point that my issues with DR3 don’t match other people’s issues, so here’s to hoping that the fanbase for this series will keep their spoiler-ridden tongues away from my personal space while I make up my own mind. Hell, I loved Danganronpa Ultra Despair Girls and apparently a lot of people consider that game no more than okay at best.

So far, Danganronpa V3 is starting off on a fine note; although it’s just the prologue, so all we’re doing is getting introduced to the characters and setting up the new killing game. You’d have to really go off the deep end to screw up that early into the game’s runtime, but of course the trade-off is that it’s hard to make things all that interesting and unique from the start as well. It does start off differently though by introducing us to the characters in standard uniforms rather than their eccentric Ultimate attire, as well as having these students denying that they’re Ultimates before they “get their memories back”. We also get introduced to the Monokubs and their mechs right away with plenty of fourth-wall breaking jokes regarding how this isn’t the way to start a Danganronpa game to boot. I didn’t have much of an opinion on them in the demo, but now that they’ve gotten a chance to display their quirks more individually, I’ve got to say that I think they’re pretty funny. I love how Monodam just doesn’t talk, and Monokid’s rock-hard raging voice is a riot. 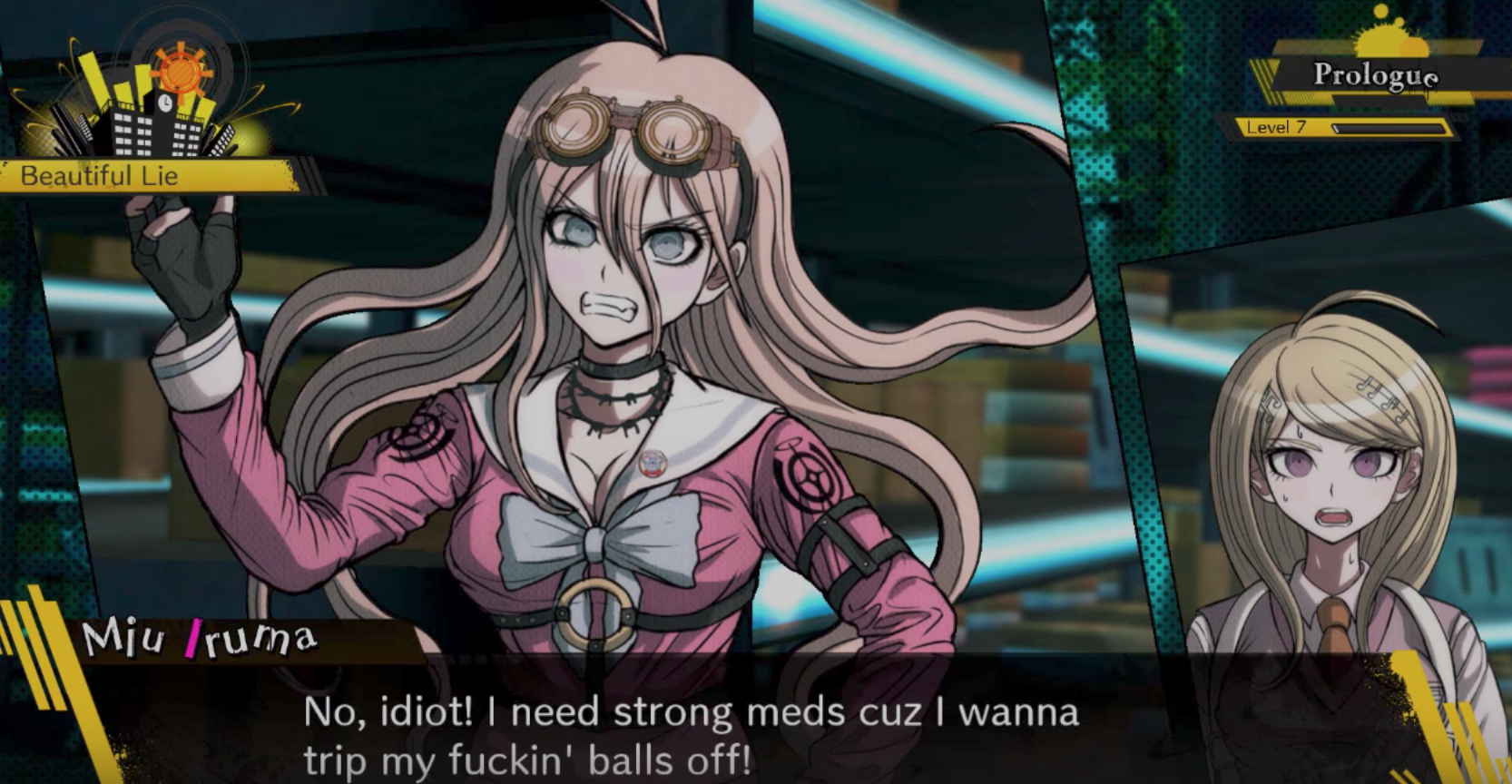 The rest of the prologue pretty much plays out how you’d expect, not helped by how I’ve played the demo so I already know each character’s personality and talents beforehand (I suggest reading that post if you don’t know who the characters are, because I’m not going to bother getting anyone up to speed here). Having said that, I like how Ryoma now has a tendency to say “you’ve still got a ways to go” in order to drive home that he’s a parody of Ryoma Echizen from Prince of Tennis. I’ve also warmed up more to Miu because her one-liners are even more hilarious in the actual game. In fact, I pretty much enjoy all the characters so far. They’re all over-the-top hilarious anime parodies that are just grounded enough in reality so that I can take them seriously. In terms of favorites so far, I like Kaede herself, and I also have a good amount of fondness for Gonta, Kokichi, and Ryoma. Everyone else I need to spend more time with before I make up my mind.

However, getting introduced to all the characters took quite a bit of time, which is something that Monokuma himself admits when he inevitably showed up in order to force the protagonists to kill each other. And then of course, he makes it even longer by going on his usual ramblings and non-sequiturs before finally getting to the incredibly obvious point. The game does its best to compensate for the length with a lot of absurd fourth-wall breaking black humor, including a reference to American politics that is going to become dated real fast, but to be fair, I can see these evil stuffed teddy bears making that sort of joke. And if that joke didn’t work for you, there are like fifty other obscure references and subversive dialogue within that scene that generally kept me entertained so that the pacing didn’t bother me too much. On that note, I’m fully aware that a lot of die-hard fans weren’t happy with some of the liberties taken with this translation (Gonta isn’t supposed to talk like Tarzan, Shuichi is supposed to sound more like a noob), but having never experienced the original version, I had great fun with Spike Chunsoft’s localization, so you guys can shut your mouths and get your fingers away from those keyboards. 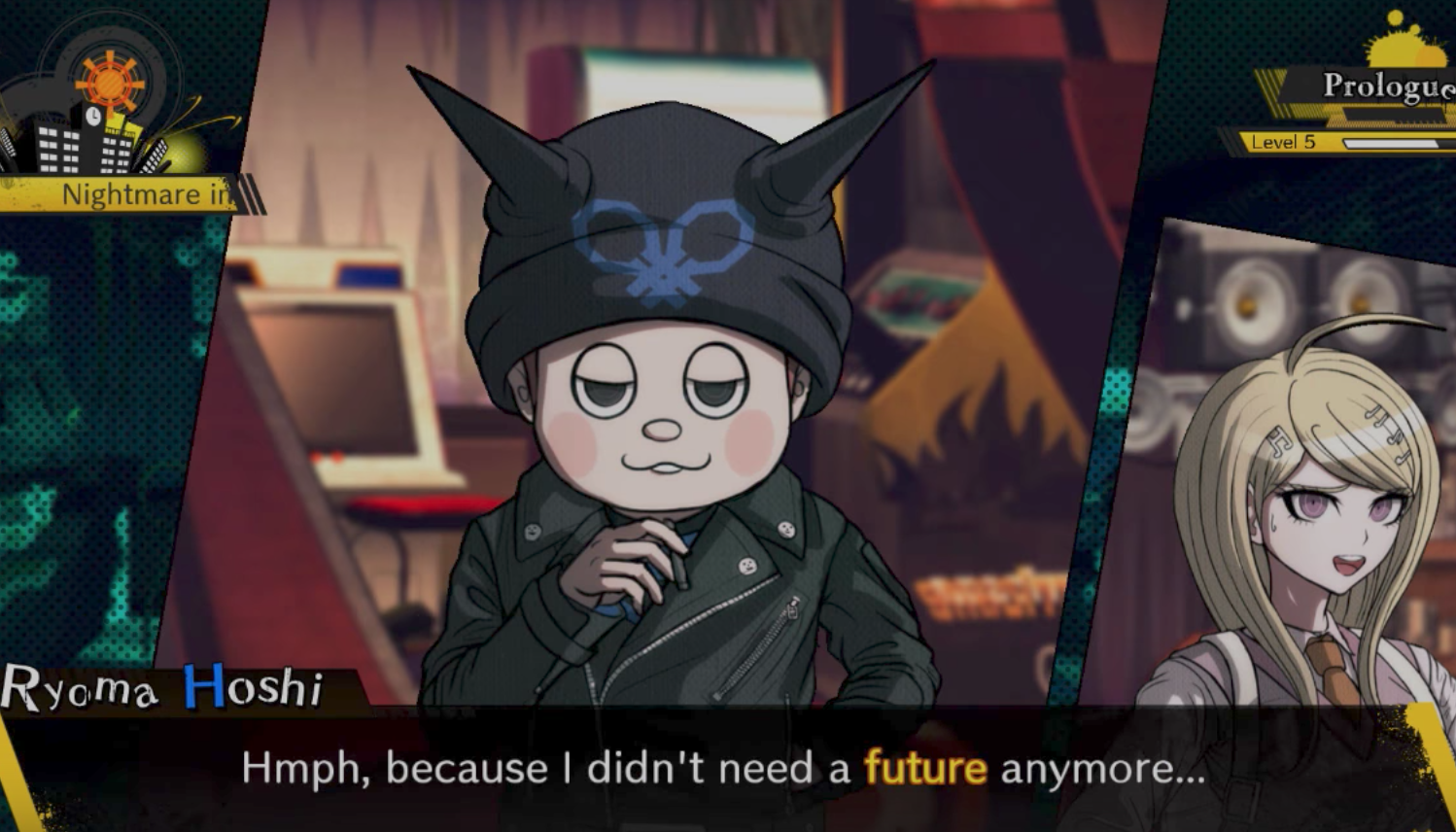 So yeah, the prologue is pretty much character introduction, concept introduction, and setting up a lot of questions that will hopefully be explained later. Nothing too fancy, but so far I have faith that this series still has life left in it. I already have a couple of theories regarding what’s really going on in Danganronpa V3 based on what I’ve seen along with some Let’s Players who are as in the dark as I am. First off, I’m pretty damn sure the sixteen students in this game aren’t really Ultimates so much as experimental subjects to give people talent similar to Hajime Hinata from Danganronpa 2. The insistence by the Monokubs that they were captured and forgot their talents sounds untrustworthy, and the fact that Kaede seems to recognize who the Monokubs are prior to getting her memory erased only adds to my assurance. Second, I think we’re in some sort of artificial Matrix-like world, but I’m hoping the creators of this game came up with a fresh way to execute that because DR2 already did that twist and repeating it for the sequel just feels lazy, especially since the foreshadowing hasn’t been very subtle.

I also have a few theories on who’s going to live and die, although there’s a possibility the formula will get changed up a bit. One, it’s highly unlikely Gonta is going to live, because the muscular characters always get killed off by the end. Two, I doubt Shuichi is going to be around Kaede for long given how much he’s being built up as Kaede’s main support, which usually indicates that he’s going to be a goner before long. Either he gets murdered in the first chapter or he’ll kill someone accidentally (because there’s no way a meek dude like him will do it on purpose). Third, Rantaro and Maki are most likely going to be around for a long time since the former’s talent is unknown, the latter is just mysterious, and these sort of mysterious creepers have a tendency to stay alive until at least the penultimate chapter. Fourth, K1-B0 is probably going to play a large role in the story down the line given how heavily promoted he is on the box art along with having a name that literally means hope. 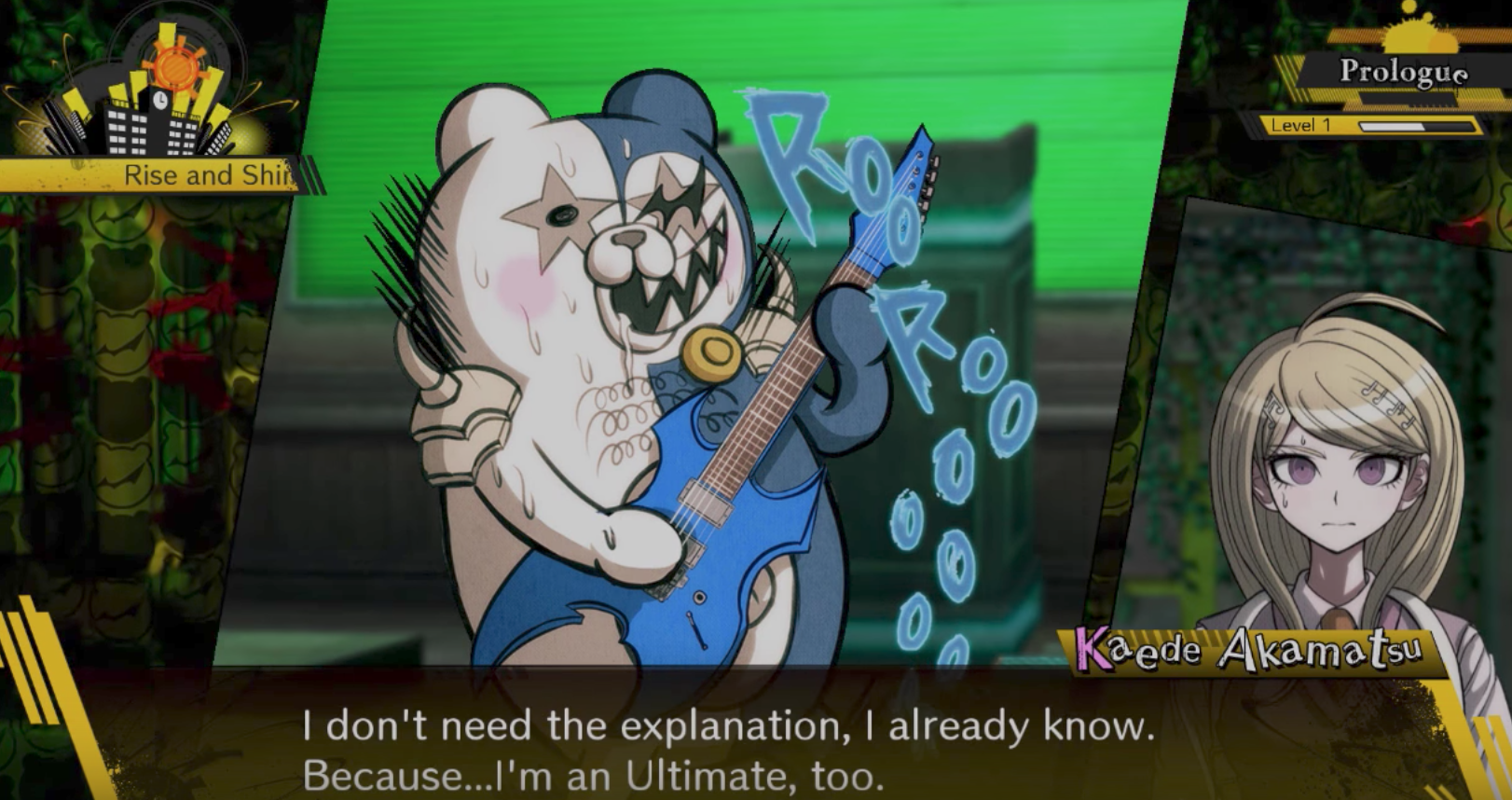 Other than that, I honestly have no idea who will live and die by the game’s end, although given Kokichi’s and Angie’s large fanbases, I’m guessing they’ll be around for a bit. Also, Kaito seems to be the buddy character that tends to live no matter what comes his way, but like I said, there’s no guarantees. I will be sad when these characters start getting picked off though because I’ve already warmed up to several of them, and we’re just getting started. But a game where nobody dies when they’re supposed to would be pretty boring to actually play, so here’s to hoping that my future with Danganronpa V3 is a happy one despite – or because of – the inevitable emotional pain.

Also, I’ve been informed that Kodaka insisted in interviews that V3 is a reboot of the franchise that will not be connected in any way to the previous games despite taking place in the same universe. Sure Kodaka. And I have the ability to shoot lasers out of my eyes. Maybe that’s why this game is so divisive. Kodaka promised a lot of things that he was ultimately lying about because the man is a huge troll. Good thing I don’t read interviews, because as far as I’m concerned, anyone who bases their opinion on anything outside what the game gives you is either an idiot or has his priorities way too skewed. 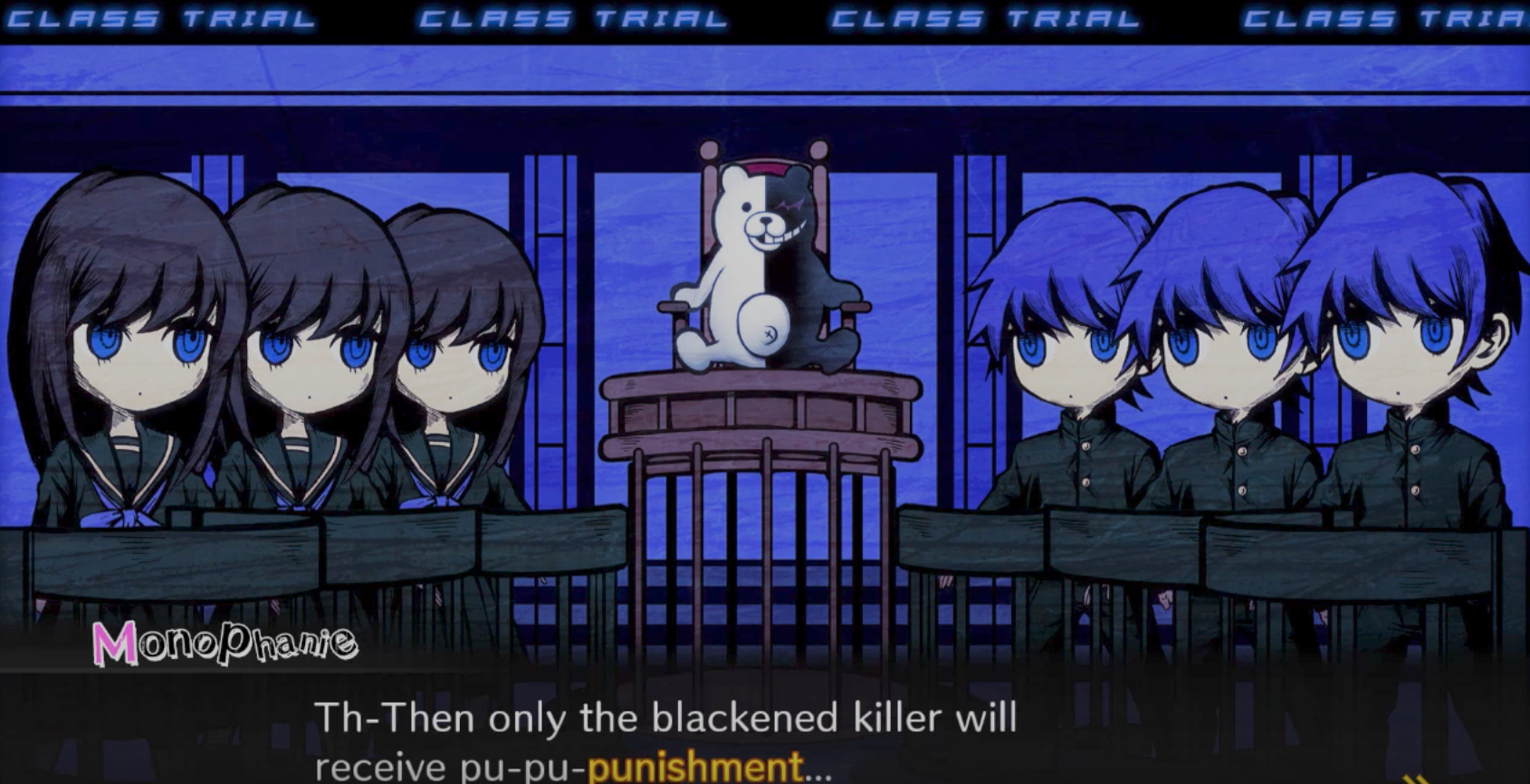 Before I end this post, I want to bring up the overall gameplay. It’s largely the same as the first two games in terms of exploration, although now there’s a slap mechanic that I’ve noticed a bunch of LPers having way too much fun with. Personally I’m indifferent to it, as well as the mechanic where you can make reaction noises with the right stick. Had to mess with the default settings a little to get the sound and movement speed right, and while it’s better than the demo, I have no idea why the music is so loud compared to the characters’ voices.

Graphics-wise, the game looks great. Unlike the previous entries, Danganronpa V3 was specifically made to be played on console and handheld, and boy does it show (I’m playing the PS4 version in case you guys don’t know). I love how stylish and more detailed everything looks, and I love the transitions so that you can see multiple characters on the screen. Monokuma in particular got a major character model upgrade that makes his previous models look like it was bought at the dollar store. Too bad that the loading times are slower to the point that it can take two seconds to pull up the menu, which gets especially frustrating when you want to check something. Oh, and whoever designed the menu so that you have to go to the friends’ section first before you can purchase abilities (which the game never explicitly tells you) really needs to go back to Game Design 101 and think about what he’s done. 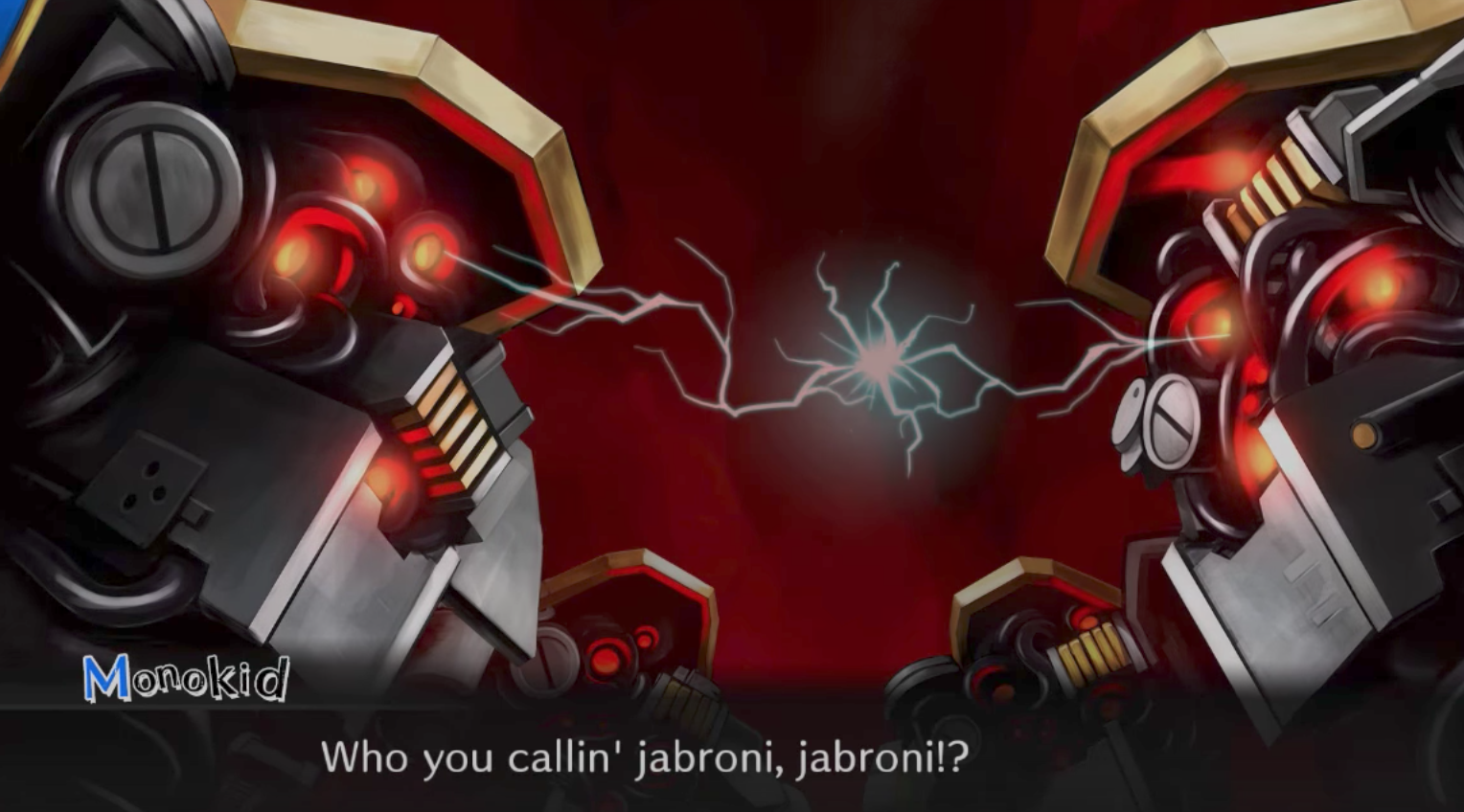 And that’s pretty much all I have to say about the prologue. Looking forward to getting into the meat and potatoes of the game real soon, as well as the inevitable memes that this entry will spawn.