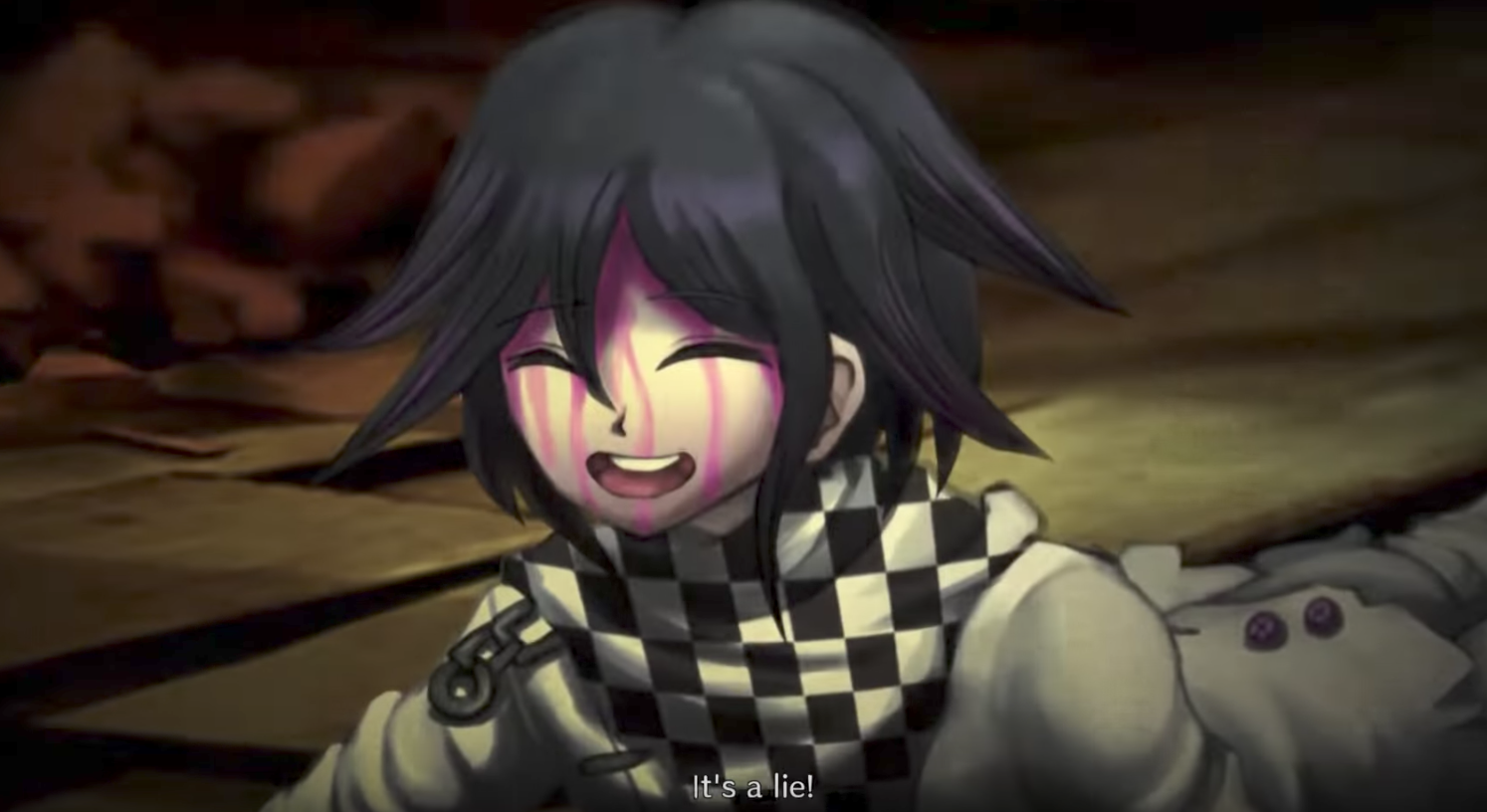 How unfortunate for all the Kokichi haters.

V3’s third chapter was a bit of a strange one. It shares the double murder that always occurs in the third case and the culprit was pretty obvious to me, not helped by a few spoiler videos on Youtube showing that person’s execution so I knew it was coming eventually. However, not only was the logic hard to figure out, but Monokuma has modified the rules for this game when it came to multiple murders. There’s no longer a limit to how many people you can kill, and murders now have a first-come, first-served restriction so you can get off scot-free for killing someone after somebody else has committed their own crime, but you won’t get any benefits either. While it was pretty obvious that the same person killed both people, especially given how they died by neck wounds, it does add quite a bit of tension to the case. Plus it gives some much needed character development for Himiko, who I’ve been led to understand is considered the female Hagakure of the game. Personally – and this is most likely due to them sharing the same English VA – I’ve always considered her a more delusional and less likable Chiaki.

The basis of this chapter is after two murders ended up happening and Maki’s true identity as a trained killer is exposed, Angie decides to take matters into her own hands and forms a student council with Gonta, K1-B0, Himiko, Tsumugi, and Tenko under the watch of her beloved Atua to restrict the freedom of the other students. Yes, I was reminded of Guilty Crown as well, and if anyone else wants to give me an example of an all-powerful student council treating the other students like slaves in the name of a better life, feel free to do so (reminder that Kakegurui’s were usually isolated from the rest of the student body and Prison School’s were just man-haters). Since the student council outnumbers the rest of the surviving students and Gonta is on their side, Shuichi and the others have no choice but to obey them. Things start to look up when it turns out Tenko is just pretending in order to keep close to Himiko, but they quickly fall down when the game draws a lot of attention to how the Ultimate Artist’s Lab is the perfect setting for a locked room murder. 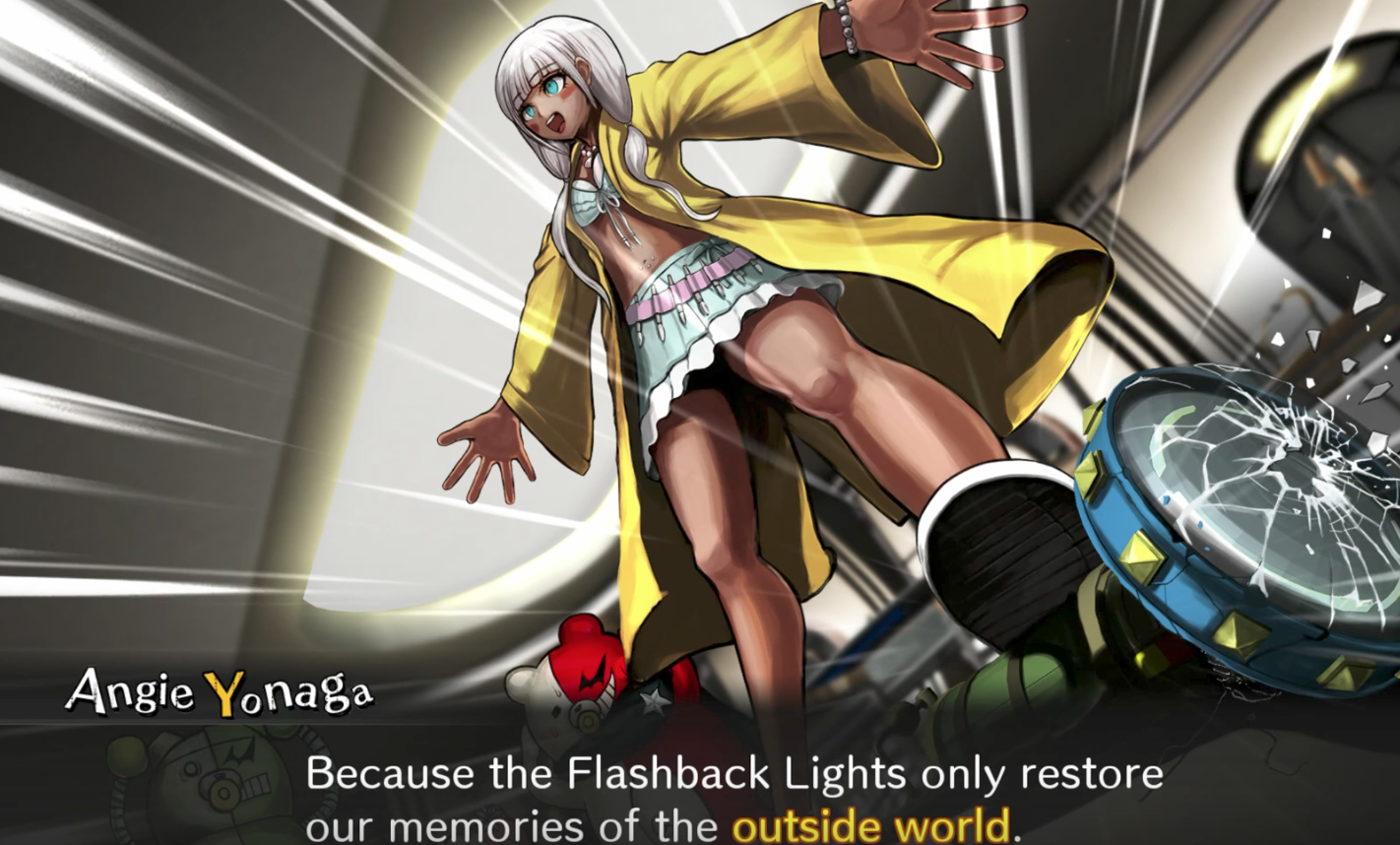 Angie gets particularly unlikable in this act, and apparently I’m not the only one who thought so, because I took a look at some Chapter 3 reactions, and she has a pretty large hatebase. I don’t hate her really, but the major sticking point for me is how the game turned her previously comedic quirks into a dramatic plot point/character flaw; and since Angie doesn’t have much character to her besides her Atua worship, when she’s using it to be a minor antagonist (as well as raising a hundred death flags in the process), it gets pretty grating. Doesn’t exactly help that for some reason, Angie’s free-time events get blocked off from ranking up after Level 3 for reasons I haven’t been bothered to look up, which means we don’t get to finish exploring her character until this game’s Island mode. In Kaede’s case, I know you needed access to the Ultimate Pianist’s Lab to get to Level 2. With Shuichi, I have no idea what the restriction is.

Note: I have since been informed that it is possible to max her out in the main game, and the cause of why I personally couldn’t is unknown.

The only two things I agreed with Angie on during her reign of religious evil was her decision to try reviving the first victim due to the knowledge that person held and the destruction of the Flashback Lights – which I’m really starting to suspect are bullshit and someone is just implanting fake memories into the main cast for god knows what reason. That prologue where everybody was normal right before they got their ultimate talents and clothes still weighs heavily on my mind, and I just can’t think of any other reason for that act to exist. Yes it’s a possibility the prologue was meant to hint that the characters had their Ultimate skills wiped from their memories, but that seems too easy an answer for a game series like Danganronpa. So easy in fact that I think I’d be disappointed if I wasn’t right. I mean it’s not like I deciphered the motives of the culprits behind this killing game, so figuring out that theory early doesn’t impede my enjoyment.

Chapter 3 picks up quite a bit when the murders start occurring, because even though I knew who did it from the very start, trying to prove it was a bit of a challenge, especially given how many times suspicion gets thrown off of the murderer. The case itself gave me a bit of trouble in the early sections, but I pretty much breezed through the second half. Without spoiling too much, while I found the motivation to be damaging to the culprit’s character, I did like how the motive this time had very little to do with anything. And I did enjoy Monokuma getting thrown away by the Monokids for a good chunk of the lead-up to the crime. Monodam isn’t exactly my favorite of the kids, but I think he’s pretty cute and was kinda disappointed that things didn’t work out so well for him in regards to being the leader.

Another focus of the third chapter is the growing friendship between Kaito, Maki, and Shuichi. It’s a little cliche, especially considering how much it resembles the initial main trio in Gurren Lagann if you replace Yoko Litner with a non fanservice-y Psycome character, but I think it’s executed fine for the most part. Each mainline Danganronpa game has always had a main trio consisting of two boys and one girl, but we’ve never had one where the trio were actually close friends before (usually it was the protagonist, the helpful girl, and the antagonistic male), so I’ll welcome it. Of course, also like Gurren Lagann, it doesn’t look like Kaito is going to be sticking around for too long. A lot longer than Kamina sure, but apparently he has a fatal disease that’s causing him to cough up blood, which I find kinda sad. Like Japan, I’m not the biggest fan of these Kamina archetypes (in addition to their overexposure, they’re really nothing more than glorified male cheerleaders), but I still feel sad when they bite the dust.

Danganronpa V3’s third chapter wasn’t perfect, but I like the good parts well enough to the point that the obvious culprit/formula, kinda-forced leadup, and somewhat loopy motivations didn’t turn into deal breakers. The plot seems like it’s going to really pick up from here on out and I’m excited to see what developments are to come and who exactly is going to see them by the end. At this point, the only people left are the really likable characters and the obnoxious ones who tend to stick around, so I really can’t predict who’s going to bite other than it obviously not being either Shuichi or Maki (and Kokichi is very doubtful).

Well, that’s not entirely true. Bit of a spoiler, but Gonta is still alive at this point in the story, and the muscular dudes never survive these games. In fact, with the exception of the Danganronpa 3 anime when Gozu bought it early on, they tend to die in the fourth chapter. Going to be interesting to see how that’s carried out though given how nice a guy Gonta is, while none of the survivors seem capable of killing him even with a surprise attack. But I guess we’ll cross that bridge when it comes.