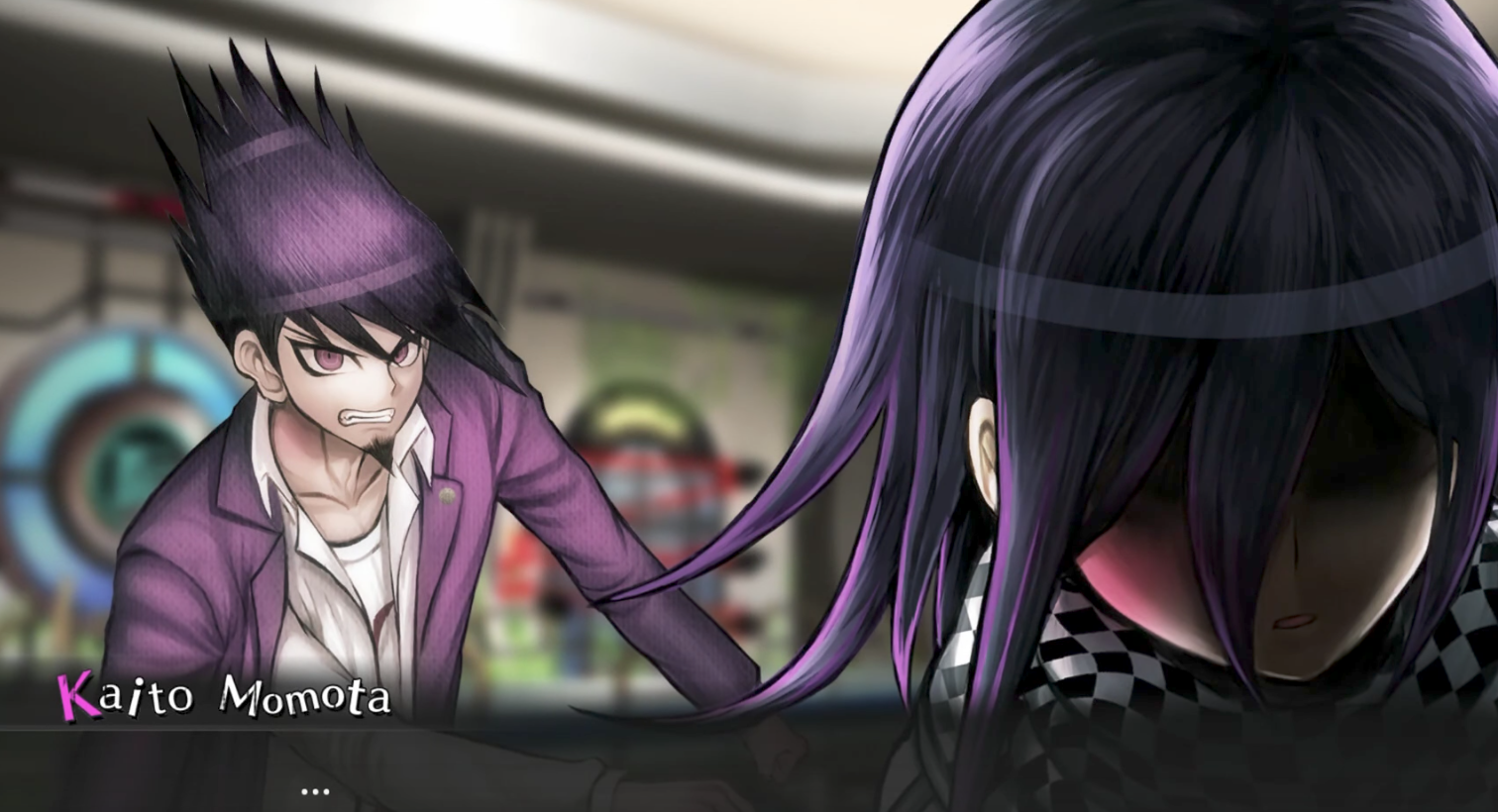 Oh look. A Danganronpa V3 diary entry that came out a day after the last one rather than a week.

A little notice before we start this one: people who keep up with these posts most likely noticed that I’ve been trying my best to keep them as spoiler-free as possible. However, a combination of my friend’s confusion on the decision combined with how much actually happens in the second half of the game has made realize that trying to keep things vague doesn’t benefit either my readers who bother to look at these posts or me in general. As such, I will give a notice regarding spoilers for each of the last three chapters before delving into the details. So let’s begin by saying that this post will spoil Chapter 4 of V3 as well as some of the previous three chapters.

Now that that’s made clear, let’s get into the plot for this. We basically start this new chapter with the usual setup scenes regarding the continuing friendship between our main trio, a few more Ultimate Labs open up with Shuichi finally getting his own poison-filled room, Kokichi ends making some backhand deals with Monokuma, and the flashback lights start to give the characters more vivid memories to the point that they remember they were part of a program called the Gofer Project – although what said program is is still unknown. I also discovered that my friendship with Himiko could now be maxed out due to the development she got from Chapter 3, and let me tell your right now, her ability is broken. It costs a lot of slots to use, but it makes the trials really easy in exchange – especially if you’re playing on the Mean difficulty.

After all that fluff, Miu invites the remaining students to enter a virtual world program she discovered on an Xbox-shaped computer that was hidden within the academy – which is basically a chibi game version of the Neo World program from Danganronpa 2. And just like DR2, dying in the virtual world means your real body goes brain dead, although V3 ups the lethality to the point that Miu becomes a corpse after someone kills her avatar. As such, it’s up to Shuichi and crew to once again solve the mystery; but unlike the previous chapters, solving the case results in things becoming a thousand times worse. It involved killing off a character I really liked, putting the other likable characters in a sour mood, and Kokichi goes from a hilarious little shit to an antagonistic one. 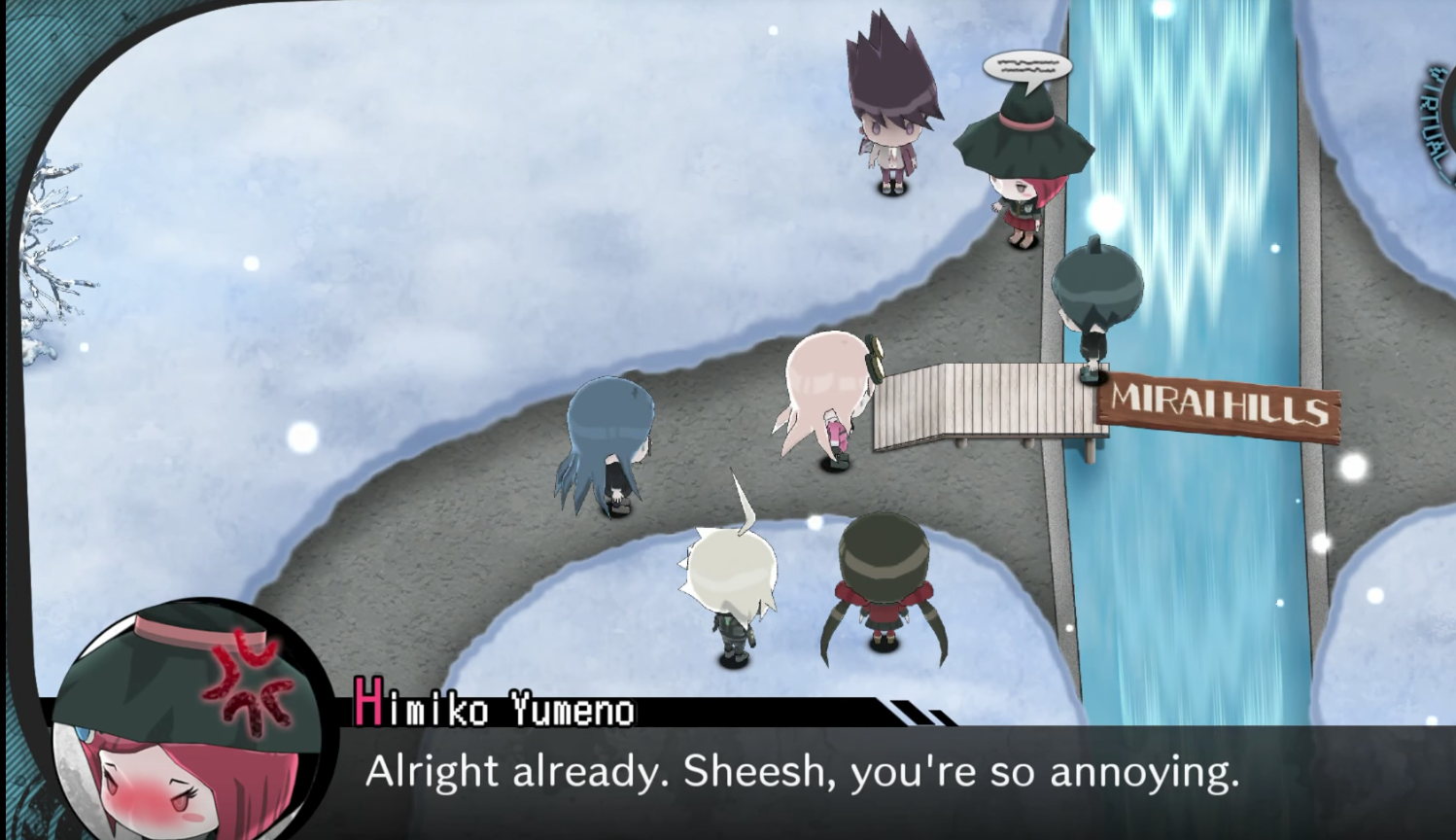 Personally, I thought Chapter 4 was a big jump in quality compared to the previous three chapters. It didn’t rely too much on the twist like Chapter 1, the culprit didn’t get caught because they took their plan too far like in Chapters 2 and 3, and we got some really good story progression out of it, especially with how it ends. The whole virtual world aspect was pretty neat as well – even though it was an obvious evolution of the Funhouse from Danganronpa 2. I liked how all the rules were setup in order to both make the murder possible and finger the culprit, plus those chibi avatars are cute. Now the victim and the culprit were easy to pinpoint due to how many death flags the former raised before her untimely demise combined with simple process of elimination for the latter. Still, it hit kinda hard this go-around because I really liked both characters – although Miu did lose sympathy points when I discovered that she was planning to commit a murder within the virtual world and frame Kaito for it.

To be fair, I didn’t really suspect who the murderer was until we were about a quarter of the way through the trial, because I wanted to make sure I had all the rules for the virtual world straight before I jumped on a conclusion. However, it soon became clear that it was Gonta who killed Miu – which I probably should have saw coming given what happens to these muscular dudes in fourth chapters and he wasn’t the victim this time – since everyone else was not in a position to do any harm to her. The case establishes fairly quickly that only those who were in the hotel area could have killed Miu, and Gonta was the only one who had the opportunity out of the possible suspects. What I didn’t see coming was how Kokichi was the true killer who used Gonta as a bodyguard to protect himself from Miu’s attempts to club him with a hammer. And I definitely didn’t understand until the very end why Gonta would either listen to Kokichi or take a life himself due to his overly-friendly nature.

I should also note that I’ve been realizing for a while that whenever a character gets access to their Ultimate Lab, that generally means said lab is going to be involved with the case in a major way. And if an introduced lab is inconsequential to the case, then that generally means the owner of said lab will either be a victim (Tenko) or a culprit (Kirumi). However, that didn’t seem to apply to Tsumugi, whose Ultimate Cosplayer lab was introduced in Chapter 4 along with Shuichi’s so I suspected her for a bit, and yet she was still alive at the end of it with nothing from her lab being consequential to the case. Guess V3 really wants to make fun of how plain she is, doesn’t it? Personally, I know there’s not really much to make her character stand out besides wearing glasses and being an anime nerd, but I think she’s a nice and funny girl that I’d like to hang out with in real life. Not criminally underrated, but definitely not last place in the Danganronpa V3 character popularity polls. 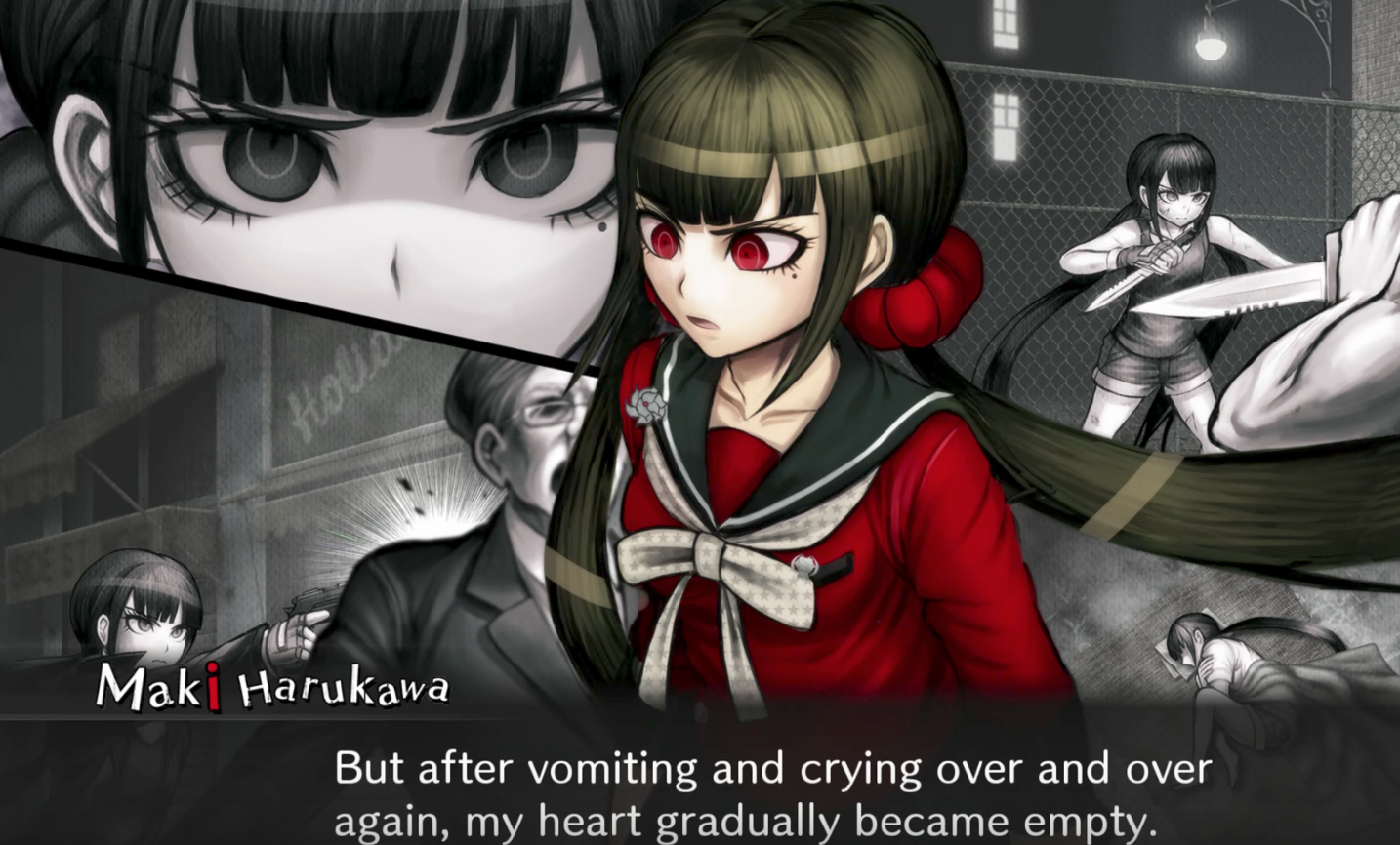 What really made the case tragic for me was how due to Gonta not entering the virtual world correctly, he lost all memory of his experiences there and thus didn’t remember his crime after he logged out. As such, he stayed the gentle giant that we all knew and loved up until his execution, and that just sucked. It sucked even more when Kaito tried in vain to defend him, even though he risked killing everyone but Gonta in order to do so. That’s one thing I really like about Kaito’s character. He’s a Kamina archetype, but it’s because he so firmly believes in his friends that he can’t see when they actually are murderers, which I think is a great flaw to have.

Also, I find that with the exception of the first case, I’m just really bad at figuring out how the culprit managed to commit their crime up until the game tells me. Granted I sort of go with the flow in regards to these trials, and I did deduce Miu’s plans with little effort, but I didn’t understand how Gonta could have gotten away with the murder until the very end when the indestructible toilet paper got shoved into my face. Thankfully, I didn’t have too much trouble with getting through the actual trial gameplay after the part where Kokichi flat-out revealed that he was working with Gonta to kill Miu. Although I started to save scum more frequently in this chapter, so I might be misremembering how well I truly got through it. 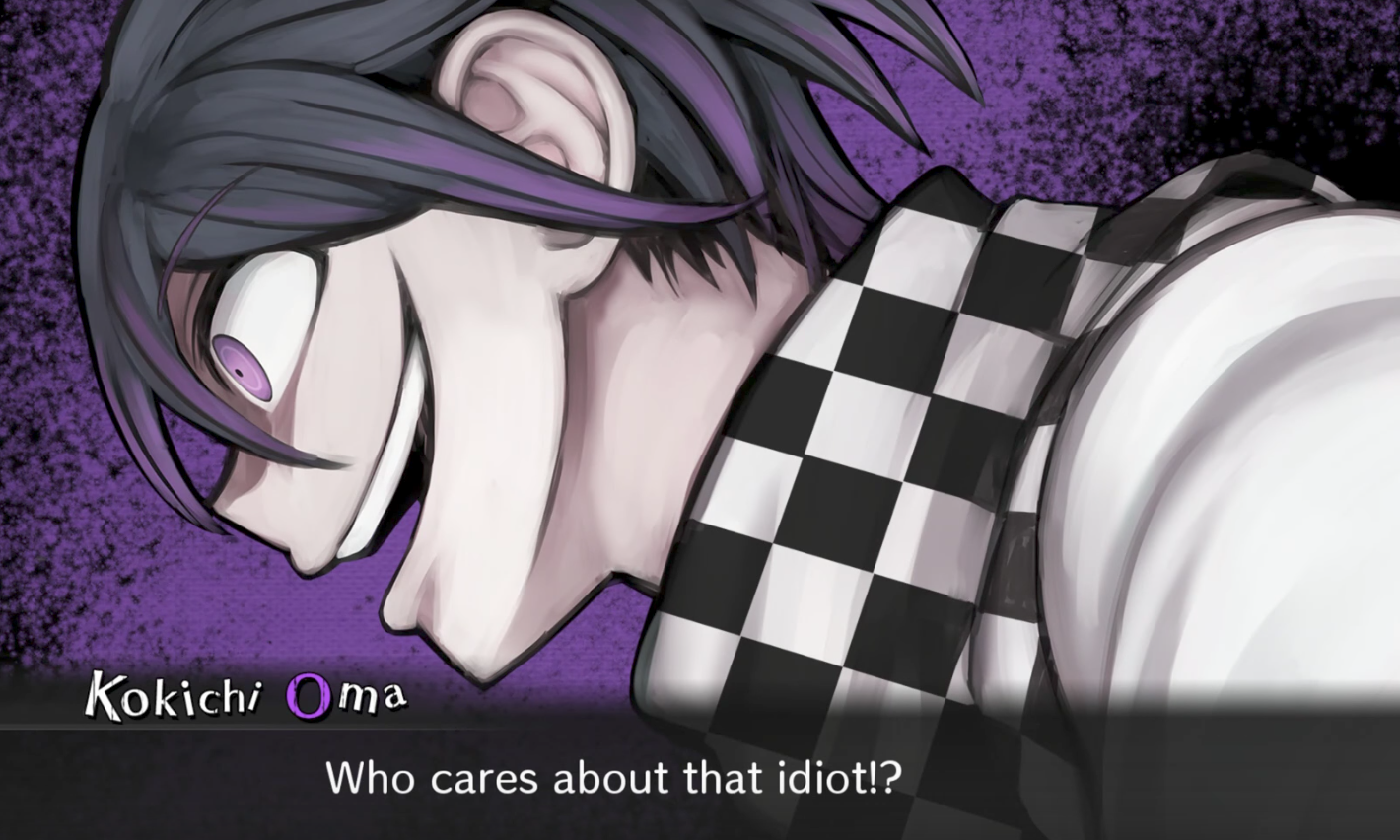 My biggest issue with Chapter 4 is that Kokichi gets a little too dickish for my taste here. Similar to Angie, his personality is fine as comedic relief, but when it actually takes center stage, it can get pretty grating. And oh man did he become a full-blown jerk at the very end when Gonta takes the fall. I understand he was almost a victim and all, but he was dialing the evil liar act way too much during the trial as is, so adding a sociopathic bent to it really didn’t do much to improve my opinion of him.

Also, it’s not bad or anything, but the foreshadowing regarding how the world outside is inhabitable and inhospitable isn’t doing much for me either. I don’t think I have to explain why given how the world being destroyed was the big twist of the first game with the later games expanding on said twist, and while I don’t mind V3 repeating some aspects of the formula, I draw the line at trying to sell another post-apocalyptic world to the players. If the game is really going that direction, I hope it has a huge surprise accompanying it. And by huge surprise, I don’t mean something completely random like the masterminds being Ronald McDonald and his friends all along.

But those issues are pretty minor, especially compared to the issues I had with last chapter, so I’m perfectly willing to call Chapter 4 of Danganronpa V3 a success. We’re nearing the climax now with the game’s final two chapters here. Looking forward to some really grade-A mindfucks here.