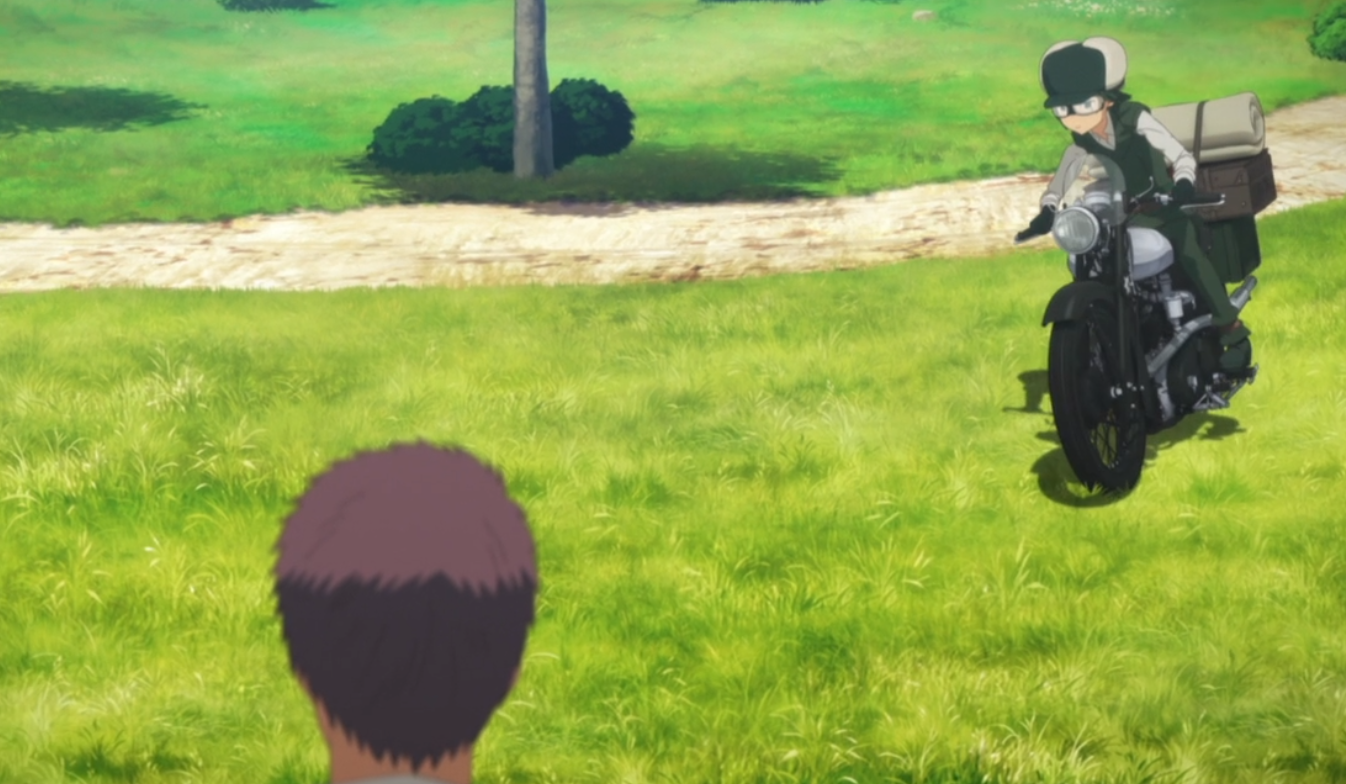 Hope you guys had a good Thanksgiving. Let’s work off that food by getting mad at some light novel adaptations. 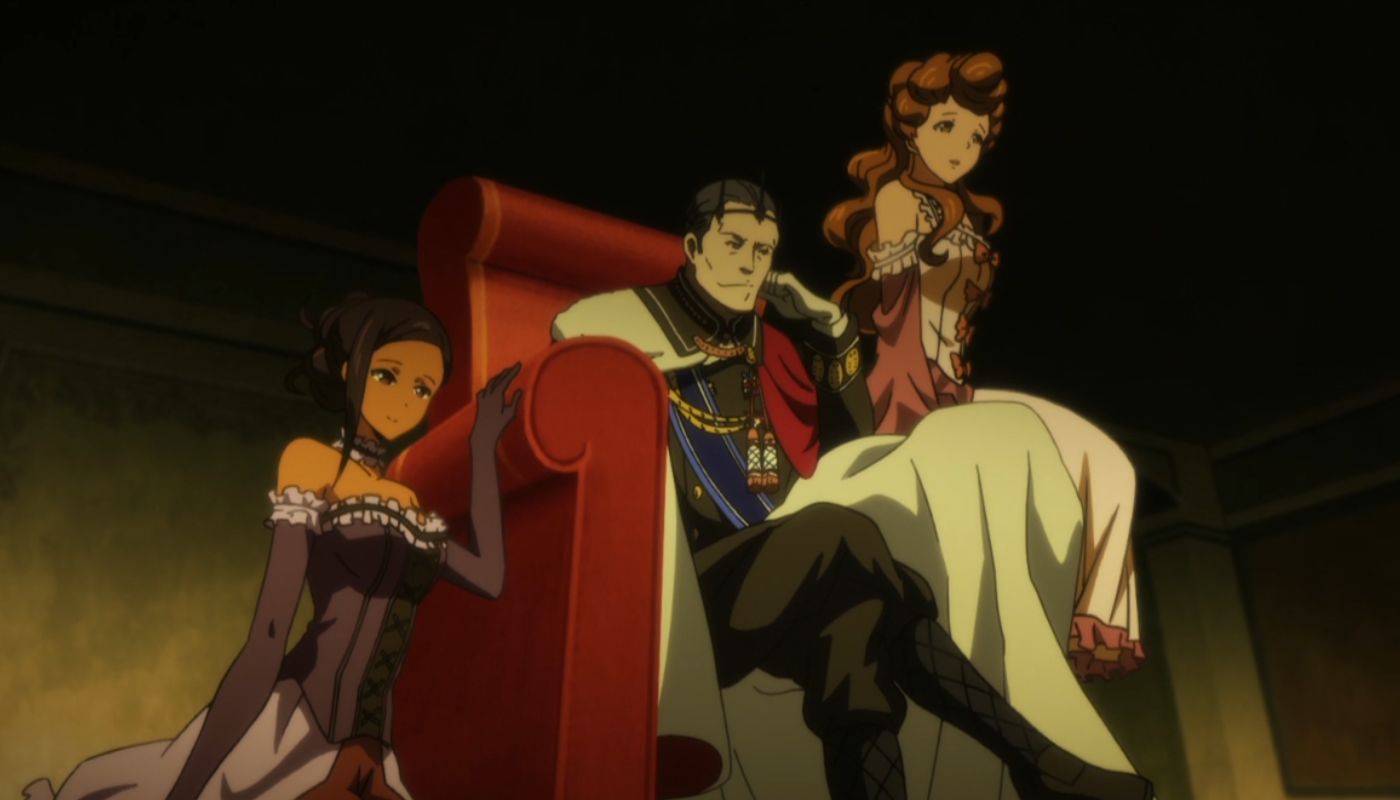 When it comes to products that have aged poorly over time, light novel adaptations are basically the Super Mario 64 of the anime world. Although that analogy would only work if any of them actually revolutionized the medium’s potential in a positive manner, and the only contributions I recall anime like Haruhi bringing were how to milk character CDs and animate actual guitar movement. While boring trends are always an inevitability in regards to something successful, I don’t think there’s been a single light novel adaptations that’s actually brought something new to the medium like Dragonball Z’s contribution to the action genre in its heyday or Super Mario 64 itself for the platformer genre (and Nintendo as a whole for that matter). Crest of the Stars was just a sci-fi story centered on two people with a chemistry that fans adored, and fuck me if I can even remember who directed it or the studio that made that series without Wikipedia. It didn’t exactly push any boundaries in terms of storytelling, which really goes to show how ultimately empty these things actually are.

What exactly has a light novel adaptation contributed anime-wise besides figures, posters, cool cosplay, fighting games, and other material things that don’t really have anything to do with the anime itself? Sure it’s great fun to celebrate with those goods, but it’s lousy when it comes to the actual storytelling I’m supposed to be reviewing. And when an anime doesn’t contribute something substance-wise, even if there’s enjoyment to be had, I’ll never think about it again after it’s finished. Especially now that I’m older and can see all the flaws with Captain Tylor, namely that the story is pretty much just “there”.

So where exactly am I going with this spiel about light novel adaptations being lousy, you may ask? Well, basically I’m saying that I hate them, and consequently I hate Kino’s Journey. 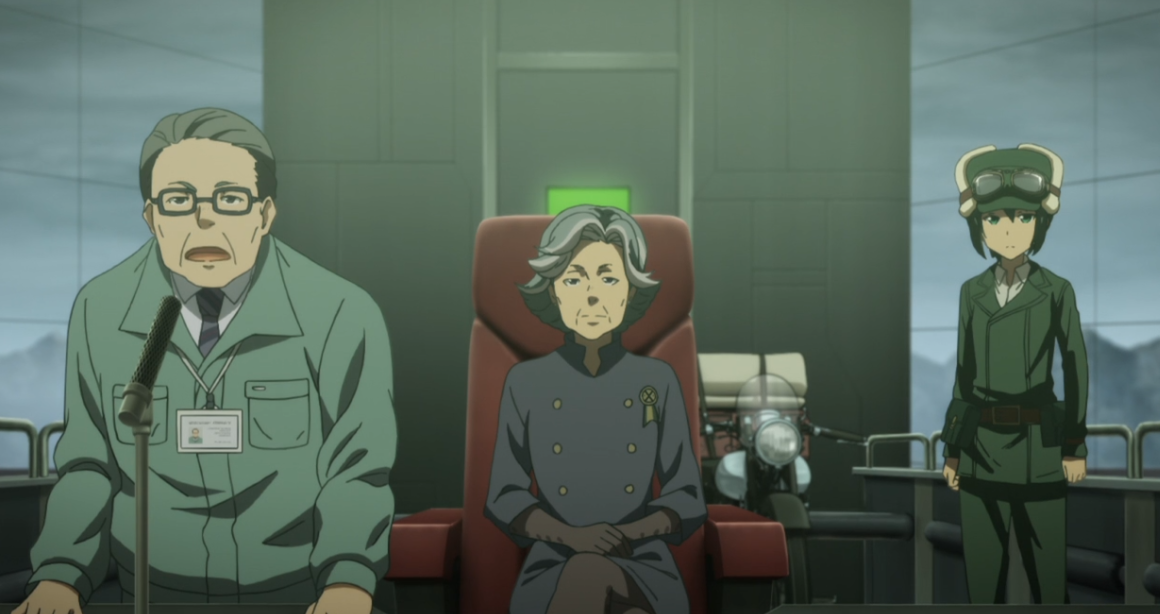 Kino’s Journey is a new adaptation of a series of light novels that hasn’t been animated for more than a decade, centered on a young boy-ish looking girl and her talking motorbike (which is apparently a normal thing in this universe) as they travel the world, visiting various countries, learn their customs, and hightail it out of their before they get caught up in the middle of a war. There’s not really much of an overarching plot to it so much as a disconnected series of fables loosely connected by Kino visiting them and the fact that said fables tend to have a bit of a melancholy sting to them. Also, the degree that Kino becomes involved with each story varies given her position as a neutral third-party that prefers traveling as opposed to getting involved in problems that could restrict her movements. Sometimes she’s just there as the audience surrogate. Sometimes she’s a victim that always gets the upper hand. Sometimes she doesn’t show up at all and the plot just exists in a vacuum.

And despite the fact that she’s traveling to many countries on her bike, said countries are more like the worlds in Kingdom Hearts in that they all exist in their own sealed-off dimension. Commerce seems to be a foreign policy no matter where you go. There are a lot of anachronisms between settings. About the only thing connecting them is that they have their own unique custom, and while magic doesn’t exist, there’s a certain fairy tale vibe to each place. Also, there’s a lot of shooting. Because that’s what was missing from The Canterbury Tales: a semi-automatic sniper rifle. 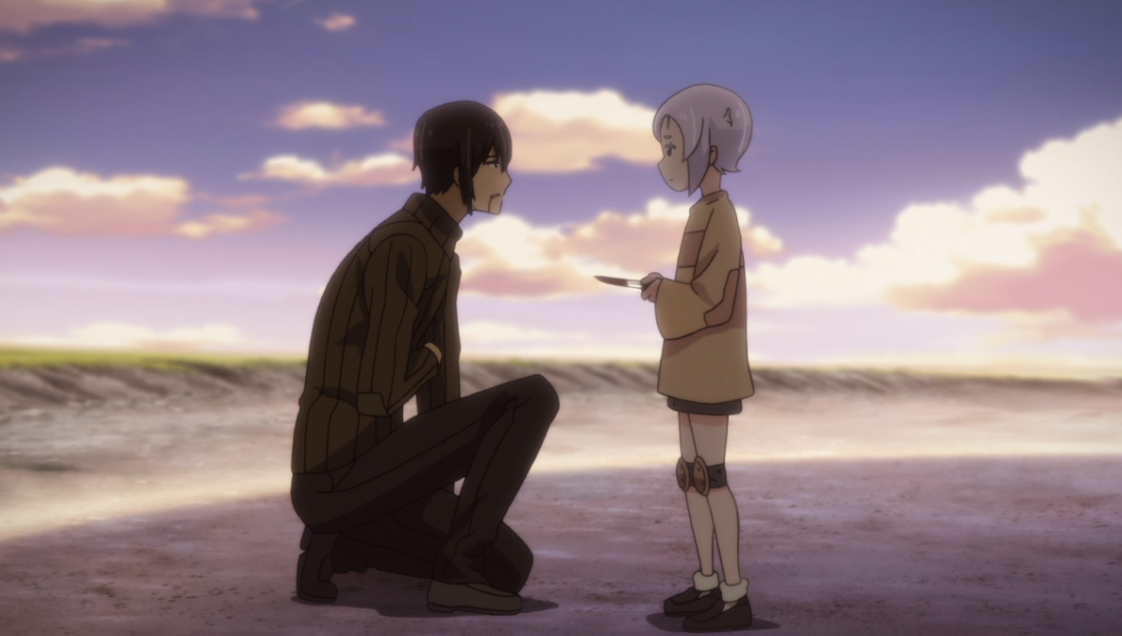 The appeal of Kino’s Journey is supposed to lie in the contradictory nature of its world, hence the catchphrase “this world is not beautiful, therefore it is”. There’s a lot of death, oppression, loneliness, and unfairness in the world, but there’s also a sense of warmth that balances it out. However, telling this sort of story is very tricky because naturalism is a very vital part that’s needed to sell what Shakespeare used to make a living, and I’m just going to cut to the chase when I say that Kino’s Journey is about as enrapturing as a flock of birds pooping on your head. Each episode has the same problem I recently had with the new Pixar movie Coco, where it feels like the writers came up with the ending first and then wrote the plot around that so the journey can come off a little unnatural or by-the-numbers at times. But while Coco had great animation, charming characters, a vast world popping with life (which is ironic considering it’s where the dead live), and came with a short where Olaf from Frozen gets to act like a lovable fool again, Kino’s Journey has no such distractions, and it doesn’t even have any good endings to reward the viewer with either.

The show looks terrible. More importantly, it looks and acts very restrictive. I know Kino’s Journey has never been good at depicting a world you want to explore, but even by those standards, these have got to be some of the most cramped environments I’ve seen in an anime in a while. Every setting the characters visit is so self-contained to the point that I wonder how these countries even allow travelers to enter them, the colors are generally muted in a way that would make Zack Snyder call bullshit on, and every single citizen seems to be under some sort of hive mind that bases its logic on a form of humanity that you only see told in drunken myths from out-of-work sailors. Also, they’re always right. And if you don’t agree, they will fucking kill you, assuming Kino doesn’t kill them first. Which is kind of funny considering how open they are to any stranger who so much as looks at them. 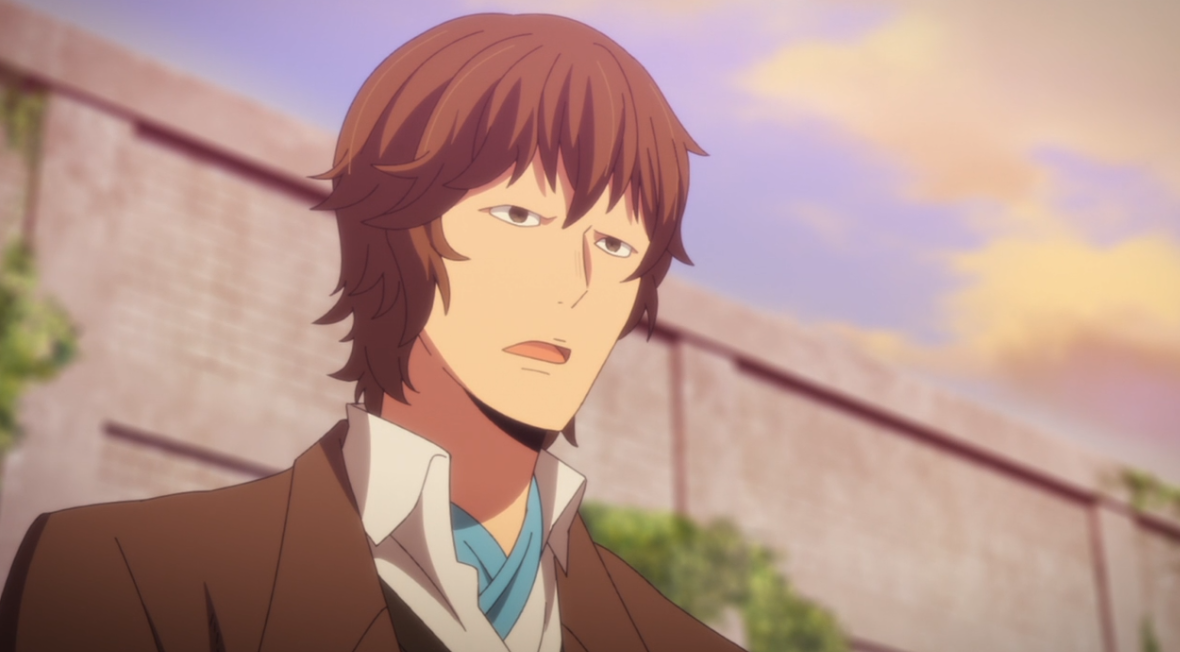 Because of this, the countries feel very artificial, which makes it impossible to appreciate any sort of beauty to come from them whether they be the magical kind or the nihilistic kind. And what really annoys me is how a lot of people say that Kino is supposed to be a fantasy world, thus you shouldn’t apply real-life logic to it. I’m sorry, but if there isn’t any sort of realistic grounding in your setting, then why am I supposed to care about your setting or acknowledge it as anything more than junk food I can’t even eat? Even the best comedies tend to ground their jokes and on-going plotlines into something relatable, because that makes it all the funnier when you do something that would be extremely unlikely to happen in reality.

Also, the tagline of this show is “the world is not beautiful, therefore it is”, which subtly implies it has to reflect the real world to some degree. It’s one thing to exaggerate human behavior to make a satirical point and another to be completely removed from reality altogether. Like the “Country of Liars” episode where an entire country lies to a dude about his dead girlfriend in order to keep his sanity in check, only for it to be revealed that he knew the truth the entire time and is just going along with it because “status quo is God”. Or the episode on a boat where it turns out robot overlords have brainwashed a bunch of ship people into not recognizing freedom when they see it. And these are just the “incredibly mind-blowing” plot twists that the show badly builds up to because it doesn’t seem to understand the concept of “show don’t tell” and every voice actor delivers their line like they’re auditioning to be a part of Sagrada Reset. So when the ending inevitably disappoints, it makes me question why I bothered sitting through that tedious build-up to begin with.

Kino herself is an incredibly boring character as well. We’re not really told who she is beyond being a traveler, but based on her actions, it’s very easy to conclude that she is a cold unfeeling gunslinger who would prefer to see the world burn if it meant riding Hermes for one more day. There are quite a few episodes where she barely has any involvement in the plot beyond someone for the citizens to talk to, or she doesn’t show up at all, which makes me wonder why her name is in the title. And if she doesn’t have any grounding in reality, plus the people she meets doesn’t have any grounding in reality, then who exactly is the moral heart of the story that’s supposed to keep the audience caring for the plot? There is a traveling swordsman named Shizu who could act as that given how he seems to actually have emotions, but he’s not in the show very much, and he tends to get screwed more often than not, so so much for him. 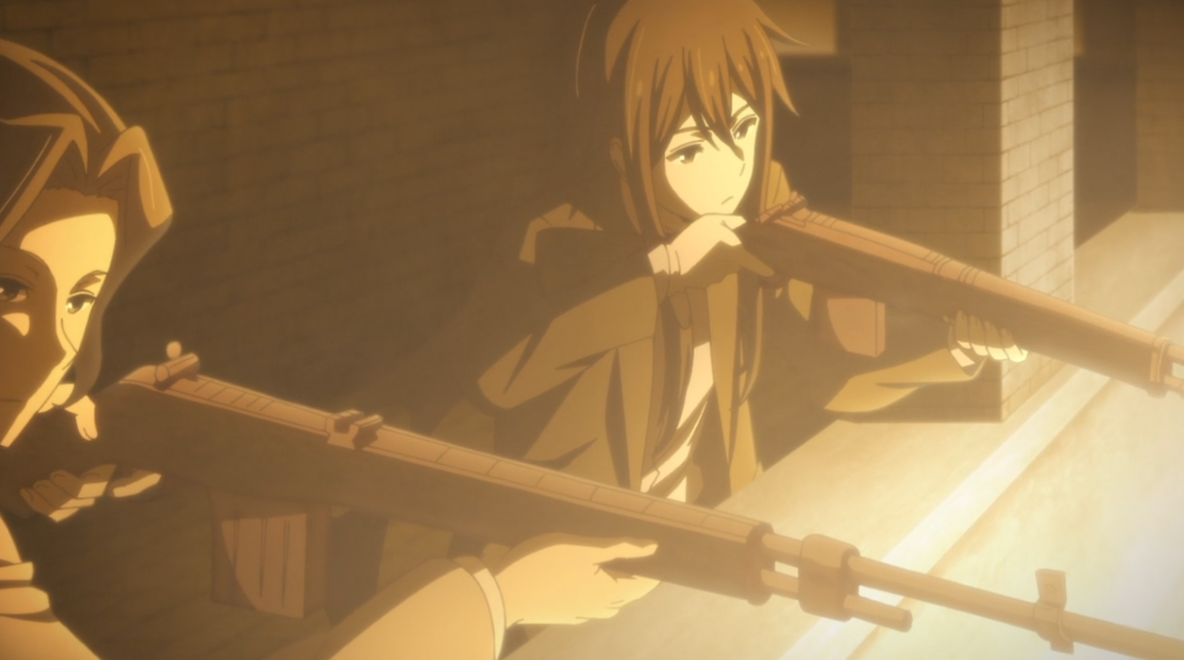 Of course, the artificiality of the show would be entirely moot if it wasn’t for how the messages that Kino’s Journey wants to impart upon the audience are just downright deplorable in abstract. You might realize that this review is coming out while there’s still a third of the series left to go. That’s because after watching the episode centered on Kino’s master unintentionally saving a country through technical pacifistic actions, I found myself unable to continue with the show because the suspension of disbelief required to overlook such a poor mash-up of wish-fulfillment tropes was larger than Mount Fucking Rushmore. And I should point out that the entire selection of stories used to make this anime was chosen through an online poll (or something like that), meaning there’s very little connecting thread between the episodes apart from some recurring characters that don’t even have any actual arcs apart from generic “I’m going to be more emotional” drivel that barely gets any focus to begin with. There’s a difference between being episodic and just being plain random you know.

Even the tone doesn’t have any consistency. The show has a bad tendency to shift between being whimsical humor that isn’t funny and morbidly depressing over the dumbest nonsense at random intervals like there was some behind-the-scenes tug of war between two different writers. It’s not quite Classroom of the Elite levels of bad, but it really makes me realize just how much Lerche loves to do this in their shows. Maybe this is a product of their desire to be different from the crowd without realizing that there’s a time and place to subvert expectations, but I fail to see how trying to live up to Jun Maeda’s legendarily bad sense humor is subversive in any way given how no one cares about him anymore. In other words, Kino’s Journey is not good as animation and it’s not good as a story-driven piece of entertainment. So is there anything good about this show? Um…the idea behind the first episode was okay, although the execution was kind of lame. 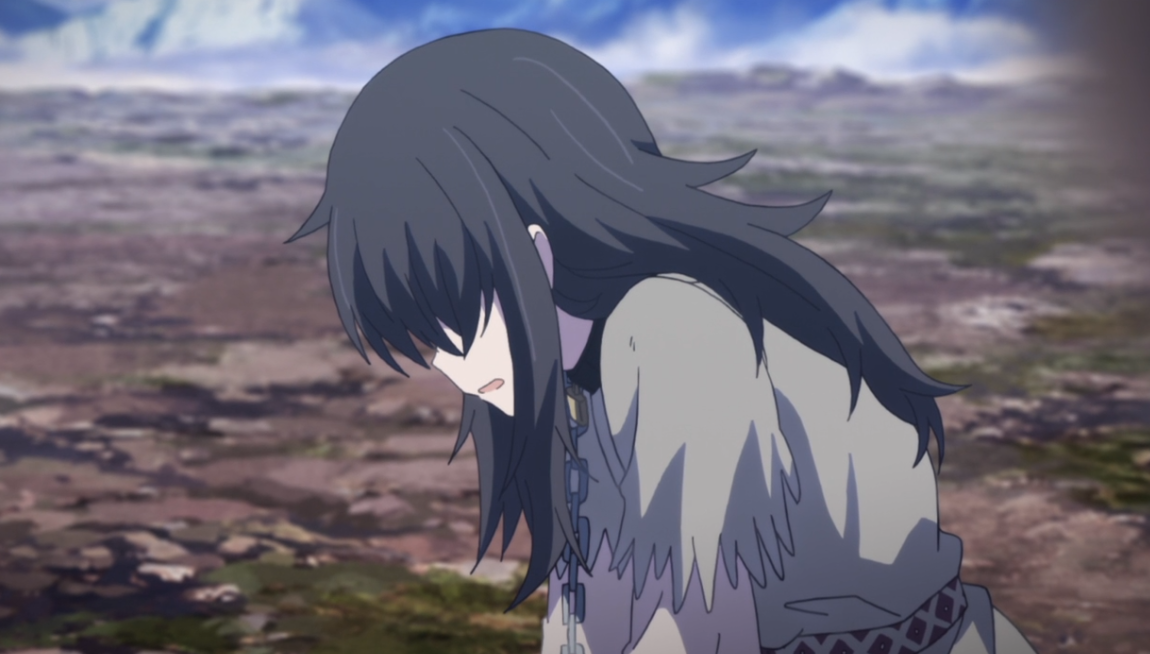 You know what? I didn’t like anything about this show that you couldn’t say about any other bad anime ever, so why should I bother even trying to find positives? I’ll just list the same complaints I say about 99% of the light novel adaptation population instead: The animation is artless. The tone is distractingly inconsistent. The characters are completely removed from reality. The stories were either written by fifth graders or space aliens.

These are all deal breakers we set Beyond the Boundary on fire for, and unlike that show, I don’t see any designs worth cosplaying coming from Kino’s Journey. You know what I do see on the horizon for this show though? Lots of people forgetting it existed within the span of a week after it ends. Well, maybe the people who were hyped for it will need three weeks. 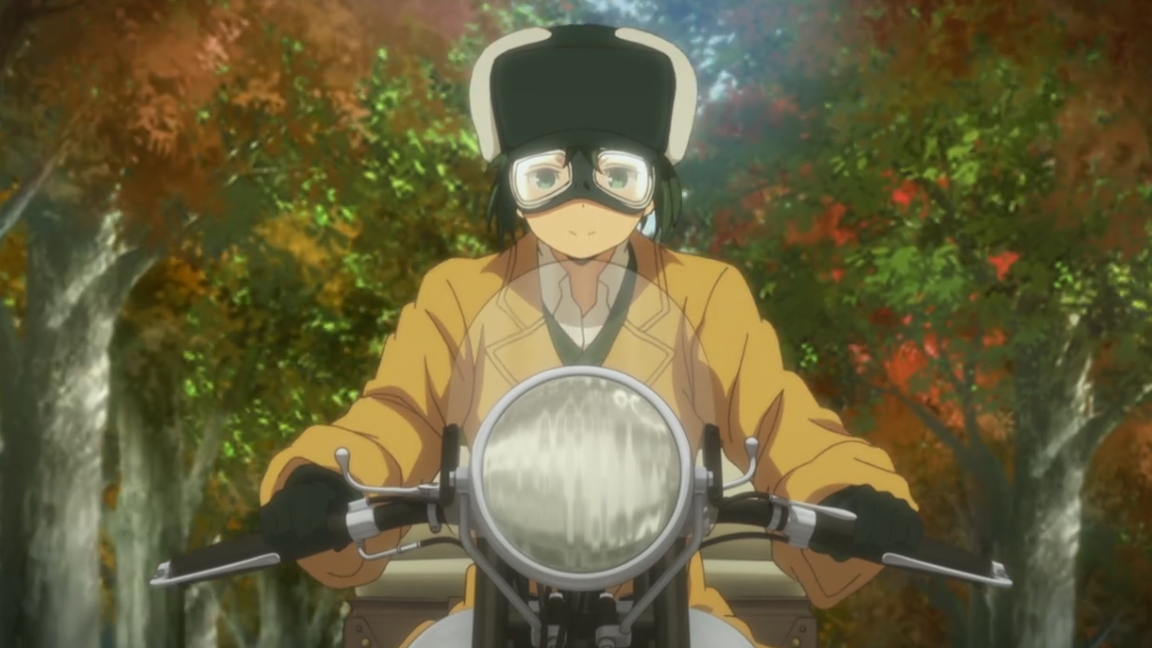