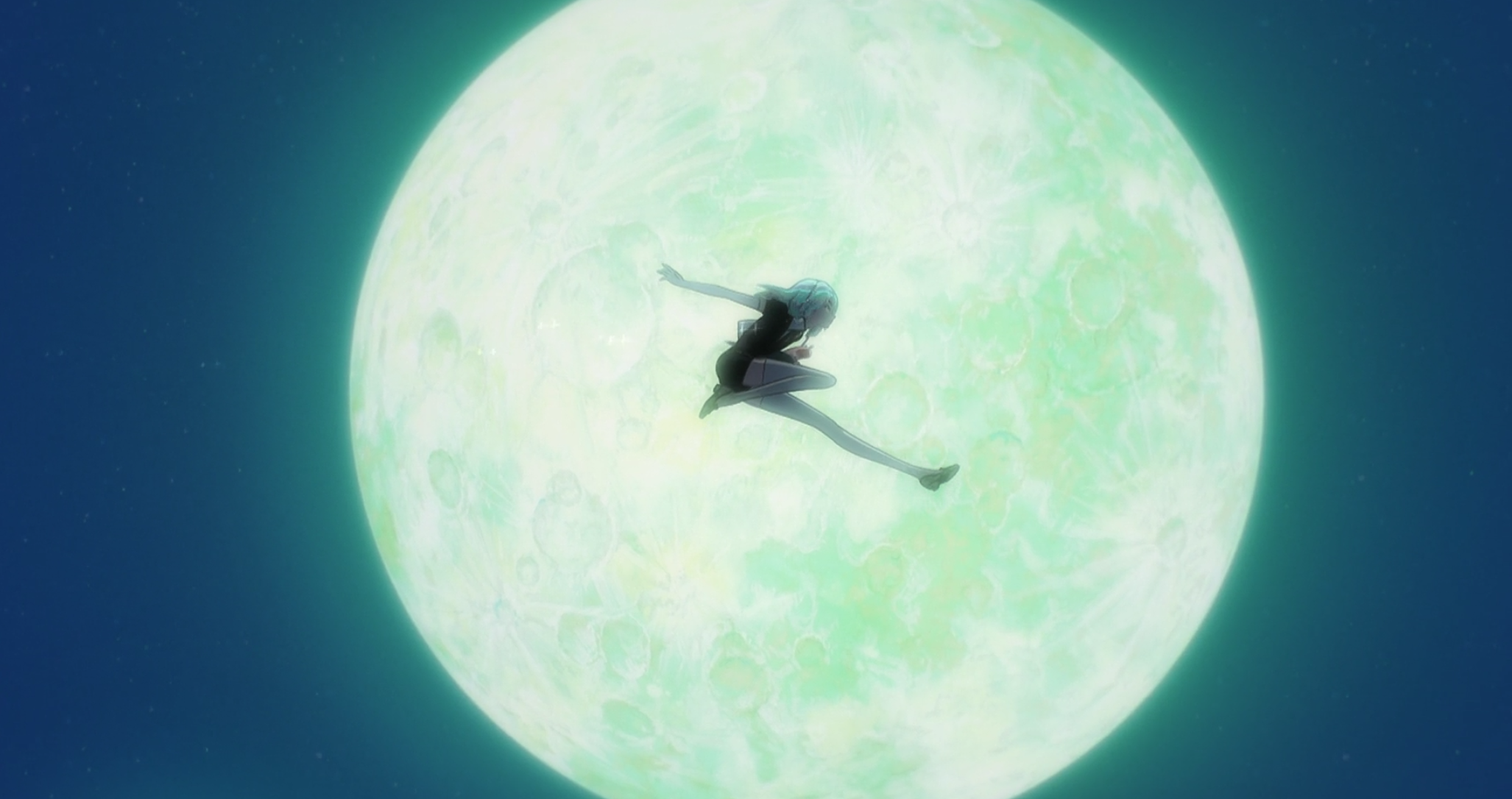 It’s like if Steven Universe was written by Yoko Taro.

2017 was definitely the year where a lot of anime tried to entice audiences by immersing them into their atmospheric settings. Some of them ended up as utter failures, but a good chunk of them ended up occupying many people’s “best of 2017” lists, and one of the noticeable “atmospheric” anime that I never got around to watching was Land of the Lustrous. The premise just didn’t interest me. A bunch of girls who are actually living gems exist and that’s about it. The summary didn’t spell out what the plot was going to be, and given how my interests mostly fall under the storytelling that animation was capable of, it was a hard pass.

But then the show drew in a very dedicated cult fanbase, and while this is the same fanbase who seem to love that Girls’ Last Tour anime that I found to be as engaging as attending fifth grade history class whilst stoned off your ass, I saw some of the beautiful animation on Youtube, learned that the original manga belongs to the seinen genre, and had some free time last week, so I figured why not use my Amazon Prime benefits more? After seeing what people were getting hyped about, I’m starting to consider just ignoring the fandom altogether. Not that it was a bad experience, but it feels more like a tech demo or a proof of concept than an actual anime.

Land of the Lustrous takes place in some strange world inhabited by living gems that are technically genderless and use male pronouns, but they take the form of females so let’s just assume they all have two X-chromosomes. Apparently, there’s some war going on between the jewel people and a mysterious red alien force called the Lunarians who want to harvest these living minerals for their luxury value, although they’re pretty faceless so we don’t exactly know why luxury value even matters to them. Our main character is Phos, which is short for Phosphophyllite, a happy go-lucky gem who is considered weak by practically everyone else and is thus put in charge of writing a natural history encyclopedia while the rest of the gems get to re-enact scenes from Braveheart.

However, whilst trying to fulfill her duties, Phos ends up running into trouble on a constant basis, causing her to lose parts of her original body and needing said parts to be replaced by stronger material. Since the jewels’ personalities and memories are contained within the minerals that make up their bodies, losing an arm and such means that Phos ends up forgetting old characters, and having a new arm made out of titanium or something will have an effect on your behavior. Now gems are immortal and thus can always be repaired after they are destroyed, but if the Lunarians steal the pieces and send them to the moon or whatever, you’re obviously not going to get your old self back. And…that’s basically the entire show. We see Phos get into trouble and the effect it has on her character. There’s some mystery in the background regarding the Lunarians as well as who the jewels’ guardian, a seemingly human character named Kongo, is, but don’t expect that to get addressed within what we’ve got so far.

Yes, unfortunately Land of the Lustrous has the same issue most of the other “atmospheric” anime of 2017 had in that the storytelling amounts to nothing more than dumping a whole lot of lore and characters on the viewer and then expecting them to have fun with what it hands out without giving me a reason why. It’s like an anime version of Fallout 4, except hilarious bugs are not included. I think some of the appeal is also because a lot of people find the gems to be cute, but personally I can only remember a few, and everyone besides Phos is always in the background for the most part so there’s not much of a point to knowing Cinnabar’s name.

If I was watching this show weekly and had no knowledge of its reception, I would have given up on it by that third episode that spent an entire installment on Diamond trying to bring Phos back to life after getting attacked by a giant slug. An installment that pretty much existed solely to show off the other gems for half an hour (which is useless because it turns out most of them aren’t plot important) before ending with a cliffhanger that Phos can now talk with slugs…which exists solely to have Phos take part in a two-episode subplot so that she can lose her legs as part of a character arc! You could have just made her lose her legs at the end of the second episode and achieved the same effect. And even then, all that’s accomplished is how Phos can run faster, which isn’t exactly a praiseworthy achievement considering there aren’t any practical uses for super speed aside from running away from Lunarians, and you don’t actually see the lead doing anything of the sort until the final third of the series.

I remember a lot of memes surrounding Phos when this show was airing, but honestly I have no idea why. Maybe people just really liked her character, and to be fair, Phos is likable in the same way Kat from Gravity Rush was likable. When we initially start out with her, she’s naive, but in an endearingly spunky way, and the show doesn’t let up in punishing her for her behavior whilst understanding why she acts the way she does. She undergoes a bit of a personality change around the last third of the series, but not only does it make her more cool, it’s also very believable given how much trauma she undergoes as a result of actions both within and beyond her control. Plus, even after the change, the show makes it clear that she’s still one of the weaker jewel people and thus HAS A WAYS TO GO! If anything, this is what Nina from Rage of Bahamut: Virgin Soul should have been. 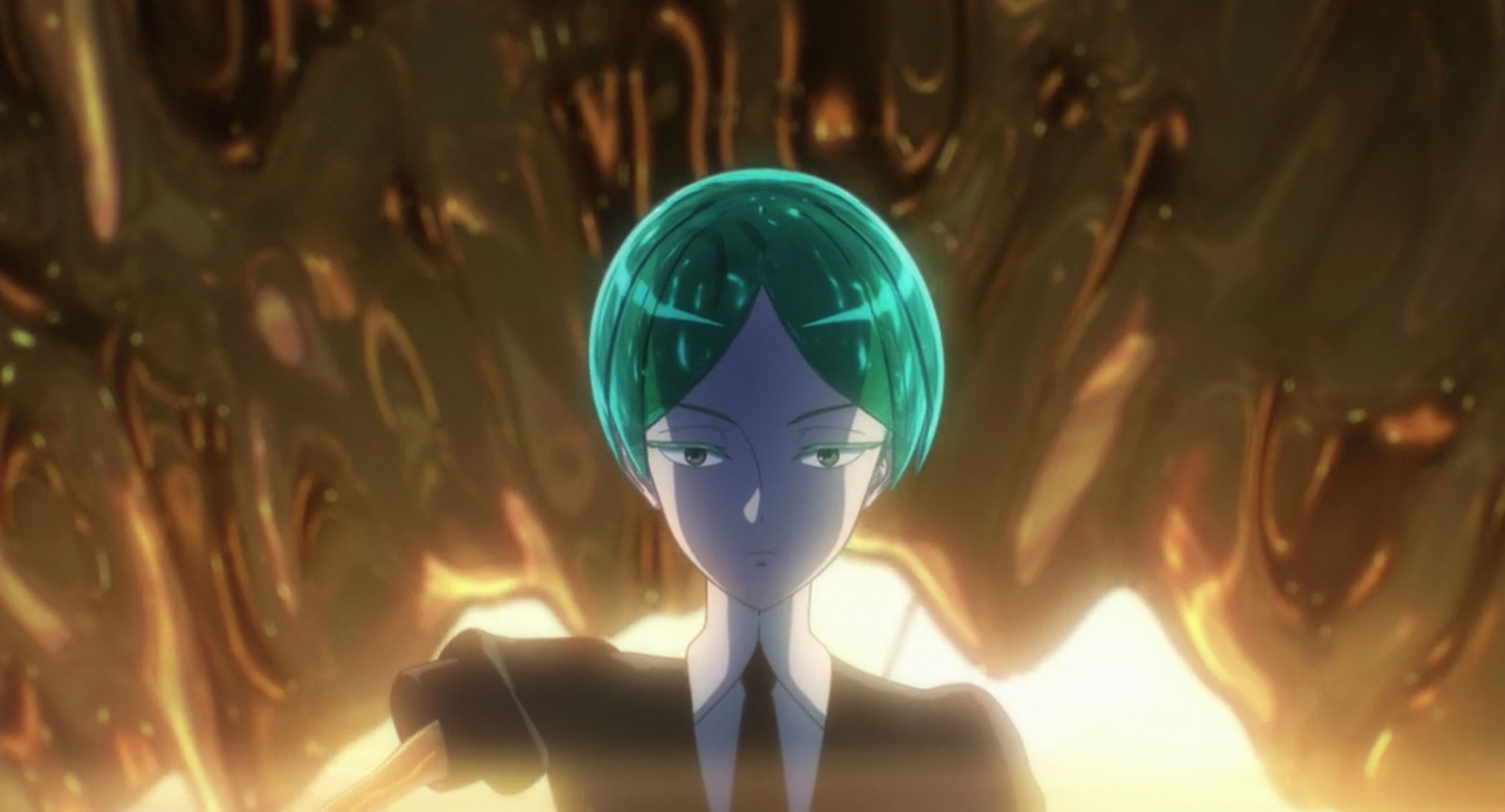 Personally, I don’t see why more anime don’t have badass protags who giggle like school girls during the carnage.

The problem is that the show doesn’t have anything to provide beyond Phos’ growth, and there doesn’t seem to be much of a story reason for Phos to grow in the first place. Officially it’s so that she can protect the jewel people from the Lunarians, but why should I care about this antagonistic force to begin with when they’re so vague? And why should I care about the jewel people when they’re not properly developed? It’s revealed around the third episode or so that humans used to live in this world until they got split up into the jewel people and some other entities that could potentially act as an overarching plot thread, so of course it gets dropped within ten seconds to focus on “and then Diamond did something cute/and then Cinnabar acted like an ass/and then Kongo did something mysterious/and then Phos created another meme”. Yeah, there are a lot of unnecessary details that seem to exist to pad the runtime.

The CG animation provided by Orange is indeed very impressive. It allows for a lot of dynamic shots and cinematic frames that wouldn’t be possible in 2-D animation, and it tends to really shine whenever the Lunarians decide it’s time to go gem-hunting. There are the occasional moments where the animation only exists to have the gems show off, but to be fair, there are worse ways to compensate for the fact that you ordered twice the number of episodes you should have in order to tell your story. Humor is okay for the most part. It’s mostly moe jokes that are supposed to contrast with the serious setting, but it’s well-timed and nothing is overdone so there shouldn’t be any grudges held towards Lustrous’ overall tone.

But obviously the animation itself isn’t going to carry me for over four hours. It couldn’t even carry me through Redline’s movie length for god’s sake. And there’s not really much being conveyed through it besides action and expressions, so if you just want a visual experience, I’d advise looking elsewhere. The ending to the series is pretty much every “we’re hoping for a second season” cliffhanger ever as well. No real resolution. No real promises that next time will be better. There is some merit on Phos reflecting on who she used to be, but that’s about it.

Look, I didn’t hate this anime. I’m just disappointed in it. But more importantly, I’m disappointed in the fanbase and how they can shower so much acclaim on prologues and confident promises whilst yelling out “second season when”. I’m just so sick of watching anime that act as nothing but appetizers for meat and potatoes that aren’t even guaranteed to taste good, let alone be produced. If you’re going to release a full-length series and I’ve got to wait more than three months for the sequel to show up, then you’d better be ready for prime time. Because tastes change, and if you wait too long, public interest is going to expire and move on for something else.

It’s like going on a first date that seems promising, only to realize that said person actually lives in North Dakota and was just in town because her favorite band was on tour. You could try doing long-distance and hoping it’ll work out, but the odds are heavily against you. Also, it’s North Dakota for god’s sakes.

9 responses to “Anime Review: Land of the Lustrous — War of the Crystal Gems”