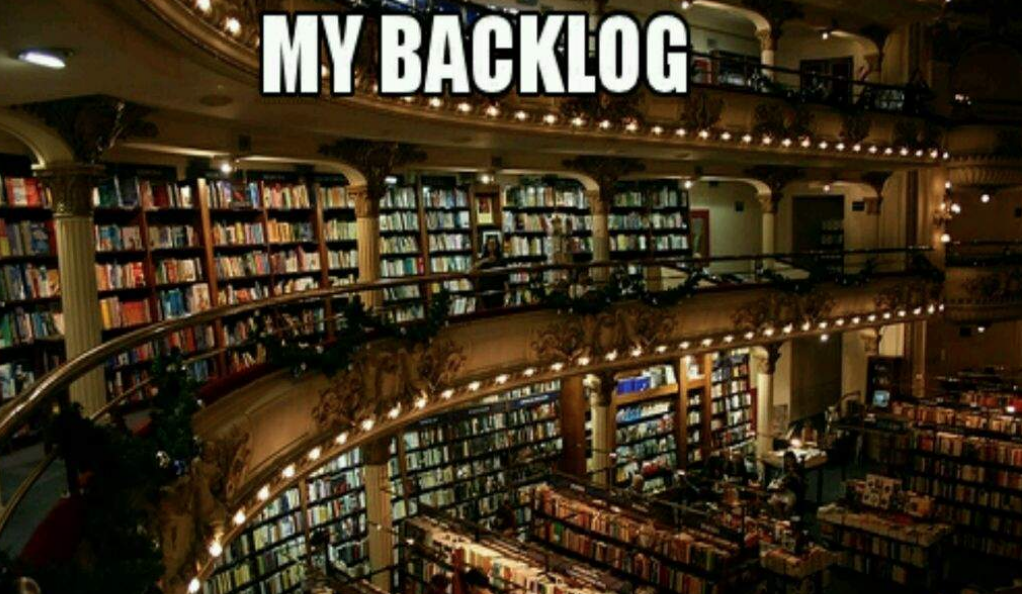 I’ll spare you the production company names in the title because it’ll be longer than my backlog otherwise.

The Twelve Days of Anime project is almost here and while I haven’t gotten word if I’ve been officially accepted into the program, I’m going to do it anyways since I already have some of the posts written up and everything. But before we go into some anime-related activities, let’s give some mini-reviews to a ton of actual anime that I recently binged for various reasons. Okay, actually they all have one thing in common: they’re all popular shows that I didn’t watch at the time and am thus diving into them in order to have a solid opinion on their long-lasting influence. Also, I’m curious how all of these shows hold up now that there aren’t any weekly discussions to drive up hype. 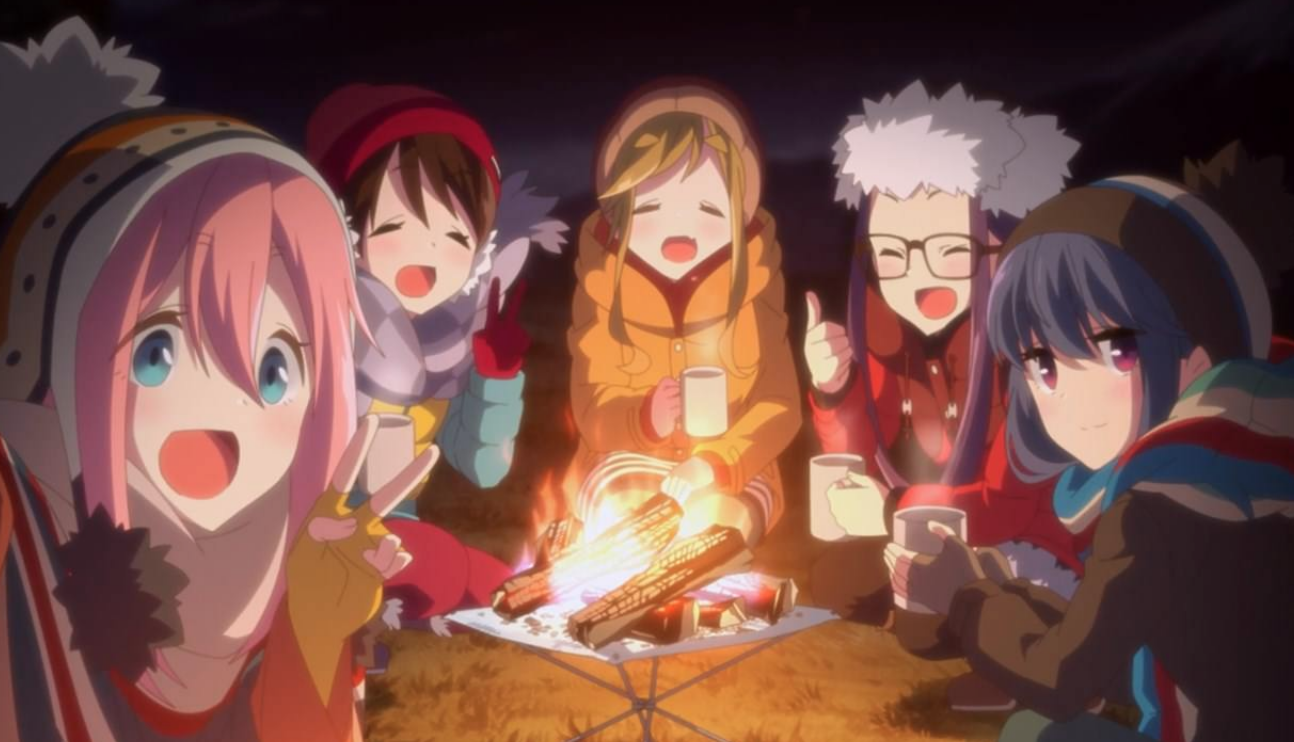 While A Place Further Than The Universe ultimately became the biggest show of the Winter 2018 season, I’m still surprised that Yuru Camp had the best debut with it selling over 10,000 blu-rays on the first volume. Now I held off on this anime for the longest time because from what I had heard, the series was just about a bunch of girls going camping, which isn’t my genre at all. All of the praise mostly said something along the lines of “it captures the feeling of going camping” without actually saying something interesting about the story and the characters. Turns out that’s because Yuru Camp is strictly for slice-of-life fans. It has no real conflict. It doesn’t even have much character development aside from Rin becoming more accepting of camping with company (and even then, she still goes on her own a lot). It’s just one of those well-animated relaxing shows that makes me relax the same way sleeping pills do.

It was kind of nice that I watched this show during the Christmas time because it does end with the characters camping during the Christmas season. But otherwise, Yuru Camp is just not for me. I know a lot of people watch anime to escape reality, but if I’m not the one doing the camping, then I just don’t see the appeal. And I’m not all that big on camping myself. Still don’t know the first thing about pitching a tent. 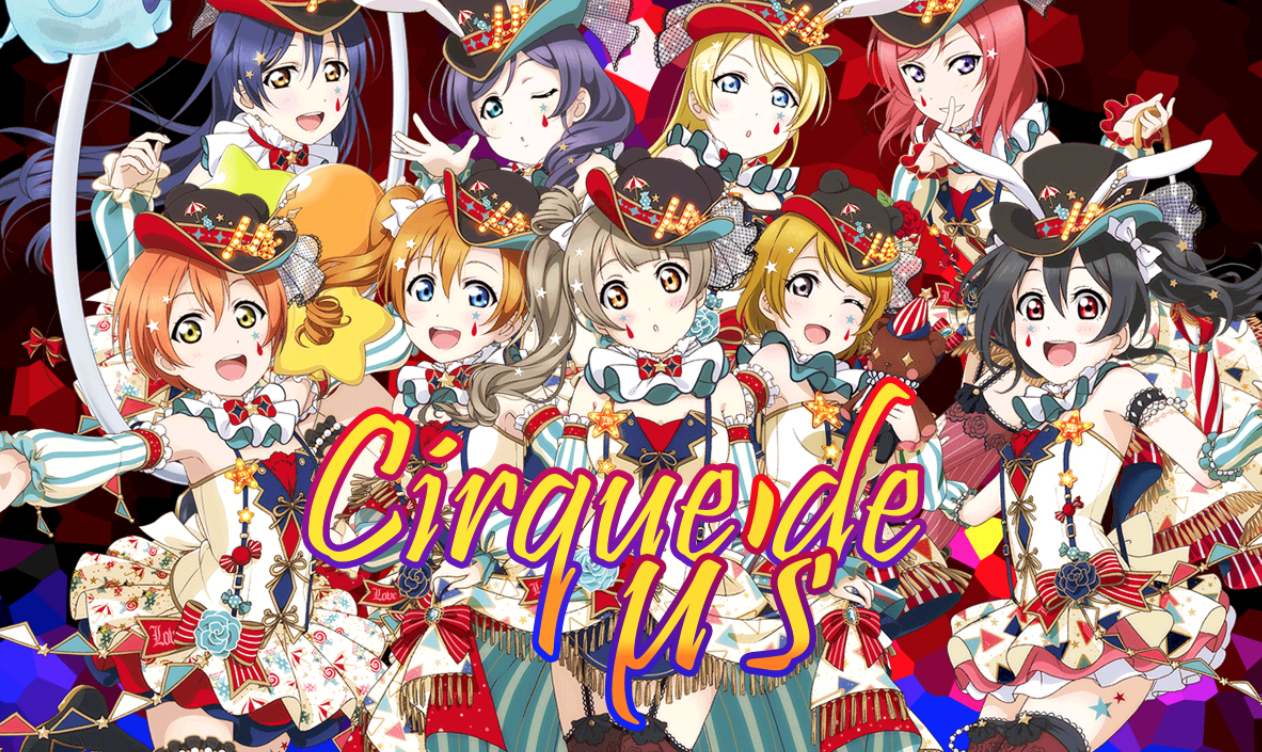 Some of you might know that I love Love Live cosplayers and events. They’re always the highlight at the anime conventions here in Dallas to the point that I consider any anime convention not having Love Live to be a crime against humanity. However, I hadn’t actually watched the show due to not having an interest in the idol genre. And after watching the anime so I could finally learn all the characters’ names and personalities, I still don’t have any interest in the idol genre. Or at least not the kind of idol storytelling this show provides.

Now a lot of you guys love Gurren Lagann, right? Well do you remember some of the criticisms it gets from people regarding how its a pretty standard mecha show? That’s an opinion I share as well, and Love Live is pretty much that for the idol genre. It’s technically well-made and popular for a reason, but the characters and storytelling are incredibly predictable, even for someone like me who hasn’t seen much idol stuff. I guess Love Live benefits from only having Idolm@ster to compare to at the time it came out, as opposed to Lagann, which had like four decades of super robot shows to use as evidence regarding why it was unoriginal.

But aside from the specific songs and the Nico Nico Nii meme, I just don’t see anything that stands out about this anime. It celebrates idol culture too much without giving a good reason why I should care, and while Mu’s is a fun group in the same way the people who cosplay them are fun, we don’t get to learn much about them. I’ve still got to sit through Sunshine as well so I can learn who the Aquors group is. From what I heard, they’re not as distinct or fresh as Mu’s but they’re still popular enough to get an upcoming movie that Love Live fans are looking forward to, so they must be doing something right. 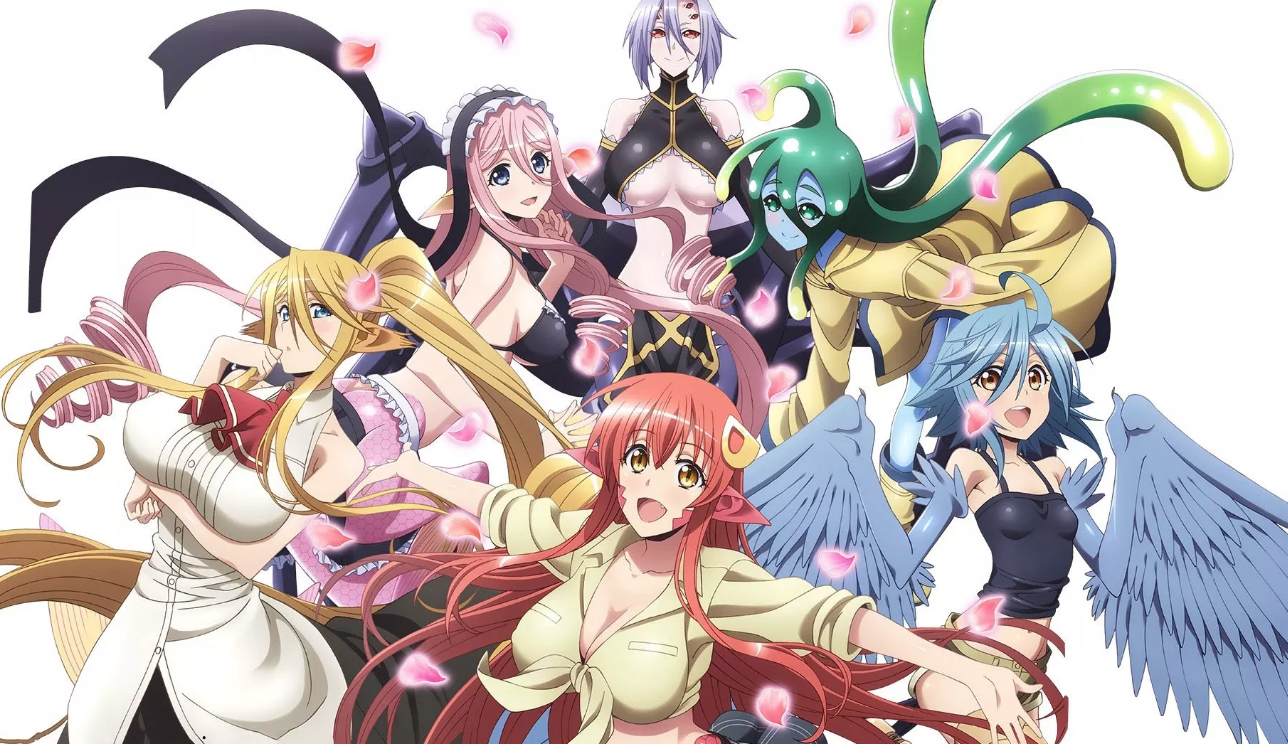 Summer 2015 is considered by many to be a bad season for anime, and it didn’t help that I contributed to that mindset. But while hits like Charlotte, Rokka no Yuusha, and Gangsta have only gotten worse with time, ironically the fanservice hit trio of Prison School, Shimoneta, and Monster Musume have only gotten better with age. Prison School is a lot more fun to me now that I picture the leads as being unfortunate victims of the “Me Too” movement. Shimoneta has just gotten more relevant due to the censorship craze we’re going through right now. And Monster Musume is…well basically it’s the new Rosario + Vampire. It really astounds me how both properties are so popular due to being cut-and-paste harem stories that happen to have some of the sexiest monster girl designs that men love to drool over and women love to cosplay. I don’t mean “astound” in a negative manner by the way. Just something I find amusing.

Now to be fair, Monster Musume does stand out somewhat by addressing the immigration laws that monster girls go through in order to live in Japan, as well as tying that into Japan’s actual immigration laws. The real thing is obviously nowhere near as exaggerated as how this anime represents it, but it does add a flavor to the fanservice hijinks that makes it stand out from Shuffle or To-Love-Ru, which basically went “fuck it and the lead dude”. And yeah, sometimes the fanservice jokes get ridiculously forced enough to the point that it’s funny, especially when compared to the latest season of Highschool DxD. I don’t care what people say. The most recent iteration was stale and lazy.

Honestly, I enjoyed my time with Monster Musume despite the big story beats mostly being cliche and the male lead being a waste of space. It’s still a trashy show at the end of the day, but at least it’s not lazy with the titillation. And for some reason, the animation gets a massive quality bump in the final episode. I want people to keep that fact in the back of their minds, because I’m going to be using it as a weapon in the near future. 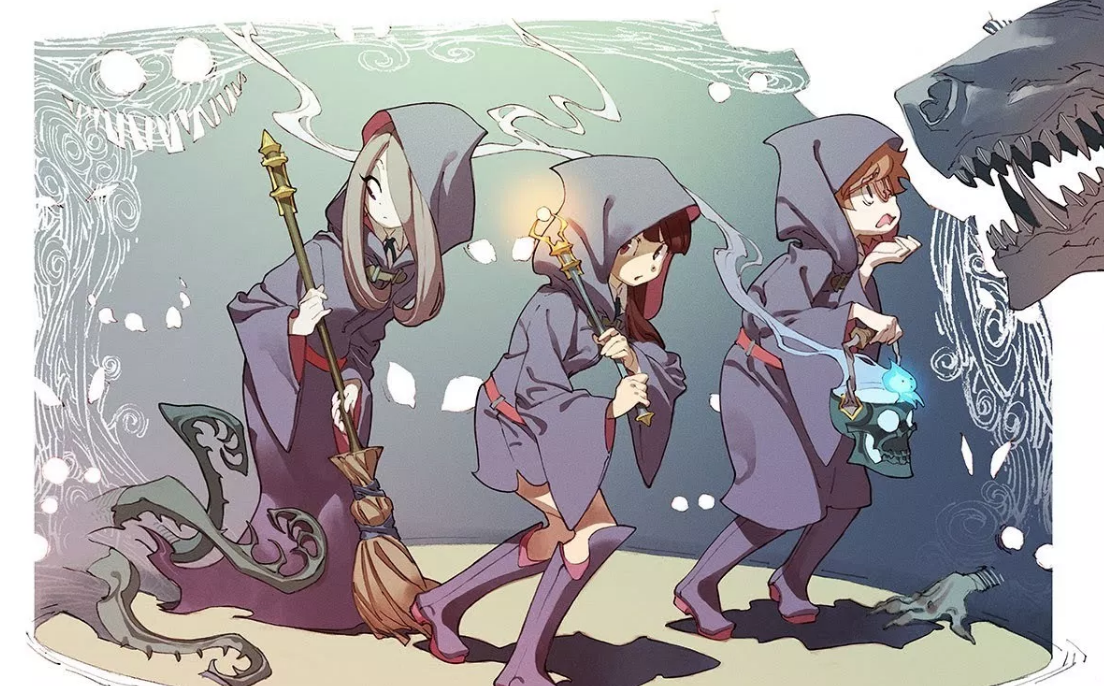 Originally, I was planning to review Little Witch Academia last month due to running out of anime I wanted to talk about that were from this year along with it not quite being too late to give a full review. Unfortunately, I couldn’t come up with enough material to make a full review out of it, so I basically watched Little Witch Academia in order to see a Trigger show that people actually liked without many caveats. Well okay, I know a few people who considered it a disappointment. But the masses like it, my anime club loves, and that’s all that matters, right?

Anyways, the one thing that really surprised me with Little Witch Academia when I finally got to watching it is how much it adheres to what’s becoming the standard Trigger formula in that it has an episodic first half and a more plot-focused second half with a “surprise twist” thrown in to make you question everything you’ve seen up until now. It even ends with a very well-animated dynamic action scene against the big bad. Everyone is probably aware that I have my issues with the production company’s output, but if anything, I at least respect that they stick to a singular vision with their anime even when they’re blatantly copying other shows and leaning their appeal towards a more Western audience. That’s the main reason why all of those Netflix-original anime fail: they do too much of the latter without bothering to take into account the former.

Ultimately though, what lets Little Witch Academia down is the lack of character development. The main character, Akko, does not grow throughout the entire show, and that gets really annoying when you have to stick with her naive mindset for twenty-five episodes. Though it would have helped if anyone besides Diana had any character growth themselves. You get the occasional character-focus episode on Sucy, Lotte, and some of the other girls but they don’t tell you much about either character, and said growth is not important to the overall plot, which makes them boring to watch when they’re not the main focus. Overall, I find this show to be a decent time-waster. Even with the reduced production values going from the movies to a full-length series, the set pieces are still a visual delight. And if you just want a kiddy anime version of Harry Potter like my friends apparently do, you’ll get it with this. 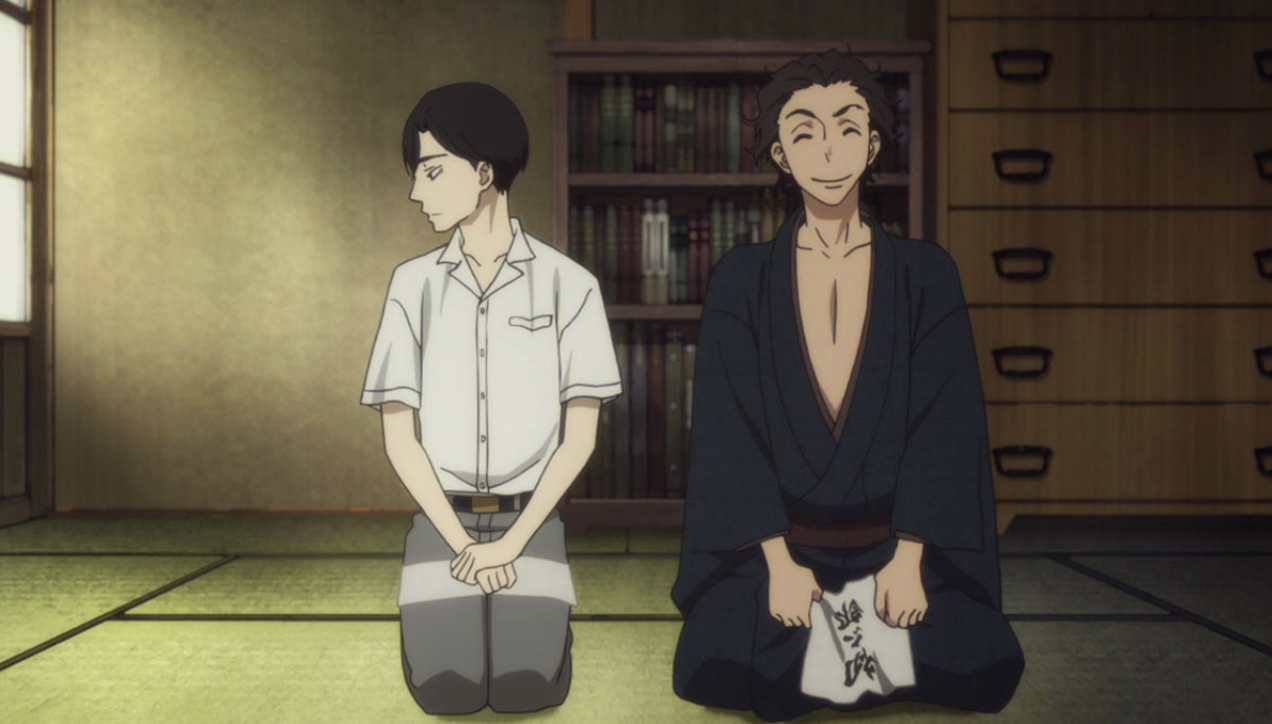 If you recall, I didn’t pursue this anime despite all of the acclaim it gets because I’ve never been able to get into rakugo as a form of entertainment. I have a hard time getting into stand-up comedy in general. How was I supposed to get into Japanese people telling stories in a language I don’t understand? That’s still true for the most part, and it doesn’t help that I find the growing bromance between the two leads to be a weaker version of the main bromance in Sakamichi no Apollon. But I’ve become more familiar with rakugo as an artform since this show came out and am now beginning to appreciate this show’s quality.

I don’t love it of course. A lot of people praise the artistry in this series, but I honestly just find it to be like a live-action series with an anime filter put on it. I know that there are a lot of smart animation cuts and Shaft-like techniques that this director is known for in this show, but quite frankly it’s not a style that I worship. And even if I did, the story is good, but it’s not impressing me enough to become a favorite of mine. I can’t really explain it beyond the fact that it’s missing that special something beyond its good execution of the characters and their relationships.

Sakamichi no Apollon had the religious metaphors and doomed romance whilst tying all of its elements to the chaotic nature of jazz. Unless someone can point it out to me, all I’m seeing in Rakugo is time-appropriate Japanese culture to support the bromance and rakugo growth. There is some bittersweet romance, but it isn’t quite as strong as Apollon’s due to how the male lead sees the females he’s involved with as throwaway. Maybe the second season will change things up, but I’ve heard mixed things regarding whether or not it was an improvement from the show’s debut.