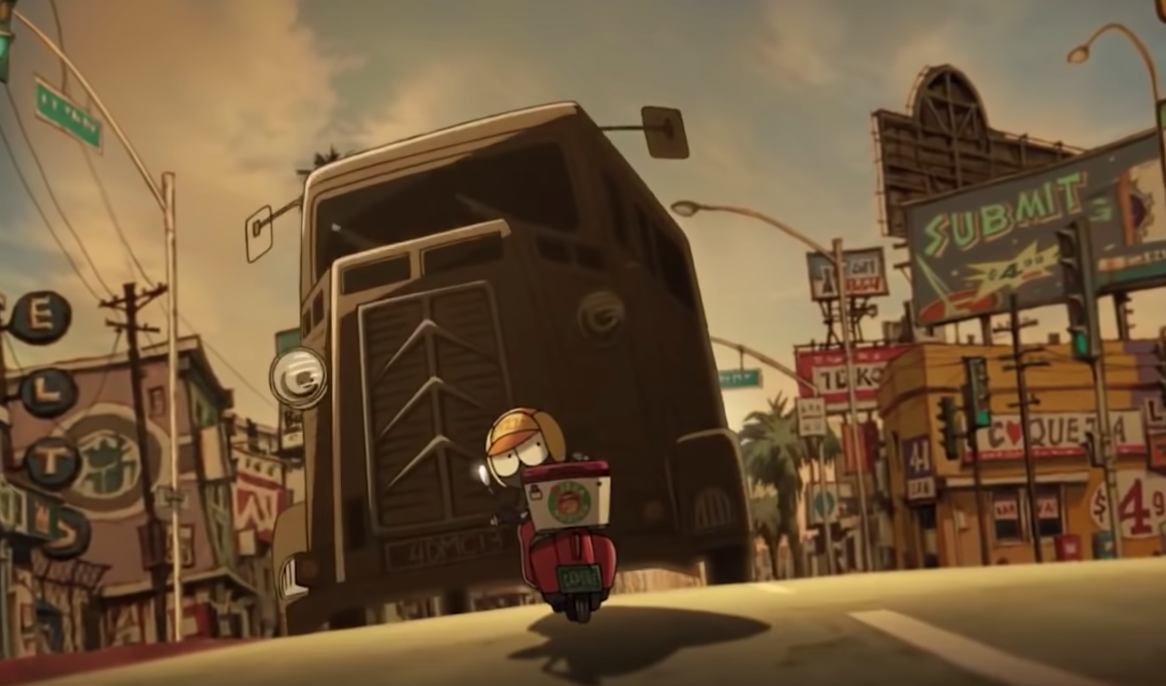 It’s no secret that Youtube is having a lot of problems these days. Watching that company continually make bad decision after bad decision because it doesn’t understand what people want anymore makes me really glad that I gave up on trying to make a name for myself on that platform fairly early on. I mean if you want solid proof of how completely backwards Youtube can be, just look at the comments section for the Mutafukaz trailer. 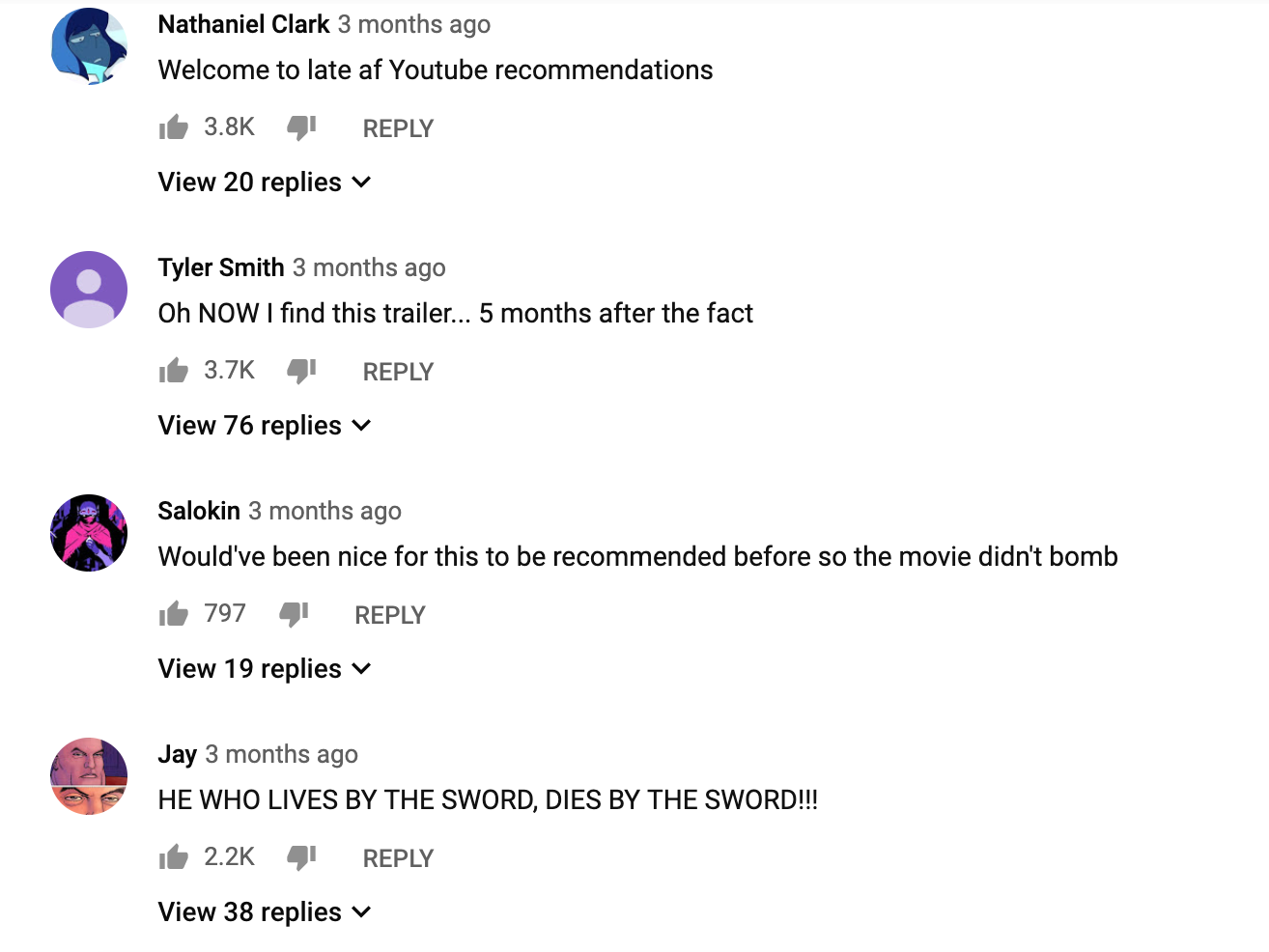 If you don’t understand what I’m getting at, apparently said trailer only got recognized through the Youtube algorithm months after the film had its U.S. screening, hence why so many of the comments are three months old as of this time of writing despite the fact that the trailer came out at the beginning of last fucking October. And given how vibrant and fun the movie looks, obviously the majority of the comments are going to be pissed at how they didn’t even know the animated version of Saints Row was playing in their area because who the hell keeps up with foreign releases besides hardcore people in denial and intellectuals like me who have the proper channels necessary to keep up with anime films as they come out stateside? Although the film’s popularity hasn’t really improved since those comments were made, and the excuses in regards to why that’s the case are starting to expire.

Hey random Youtube commenters? Mutafukaz is now available for purchase on American shores, and you can easily find pirated copies of the film on the Internet. I know you missed out on the incredibly limited big screen experience, but what’s stopping you from seeing a 90-minute long movie at this point in time? Researching and participating in an adpocalypse that doesn’t personally affect you, and thus all you’re doing by voicing your opinion on the matter is causing yourself a bunch of unnecessary stress and getting noticed by KiwiFarms? 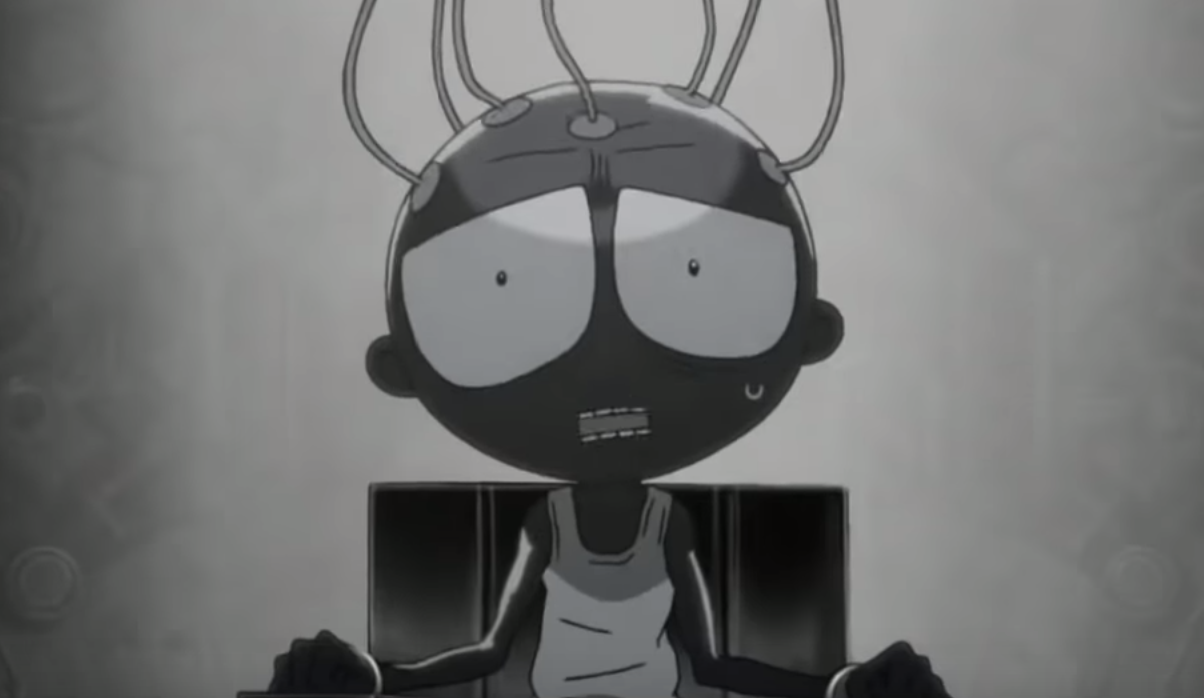 Well if the movie is shit, maybe that’s what you’d rather be doing. And critical reception seems to favor the mindset that Mutafukaz is a waste of time if you’re one of the unfortunate people who bother to take Rotten Tomatoes, IMDB, and MAL seriously and didn’t go see the new Godzilla movie. Thankfully, critical reception means jack on this blog, so let’s ignore that noise and get into discussing whether I personally think Mutafukaz is worth watching.

From what I understand, the film is an adaptation of a French comic series that I’ve never read and only technically qualifies as anime because of Japanese animation company Studio 4°C’s involvement with French animation studio Ankama (who you may know as the production company behind Wakfu). One look at the promo art or the visual style and you can clearly tell that the animation style in Mutafukaz is French as fuck. But if you watch the actual movie itself, you’ll probably recognize some of the fluidity that was done to bring projects like Mind Game and The Animatrix to life, and it’s a crossover style that’s really appealing to the eyes, especially when the plot indulges in all of the high-octane violence and car chases that generally accompanies urban gangster tales. 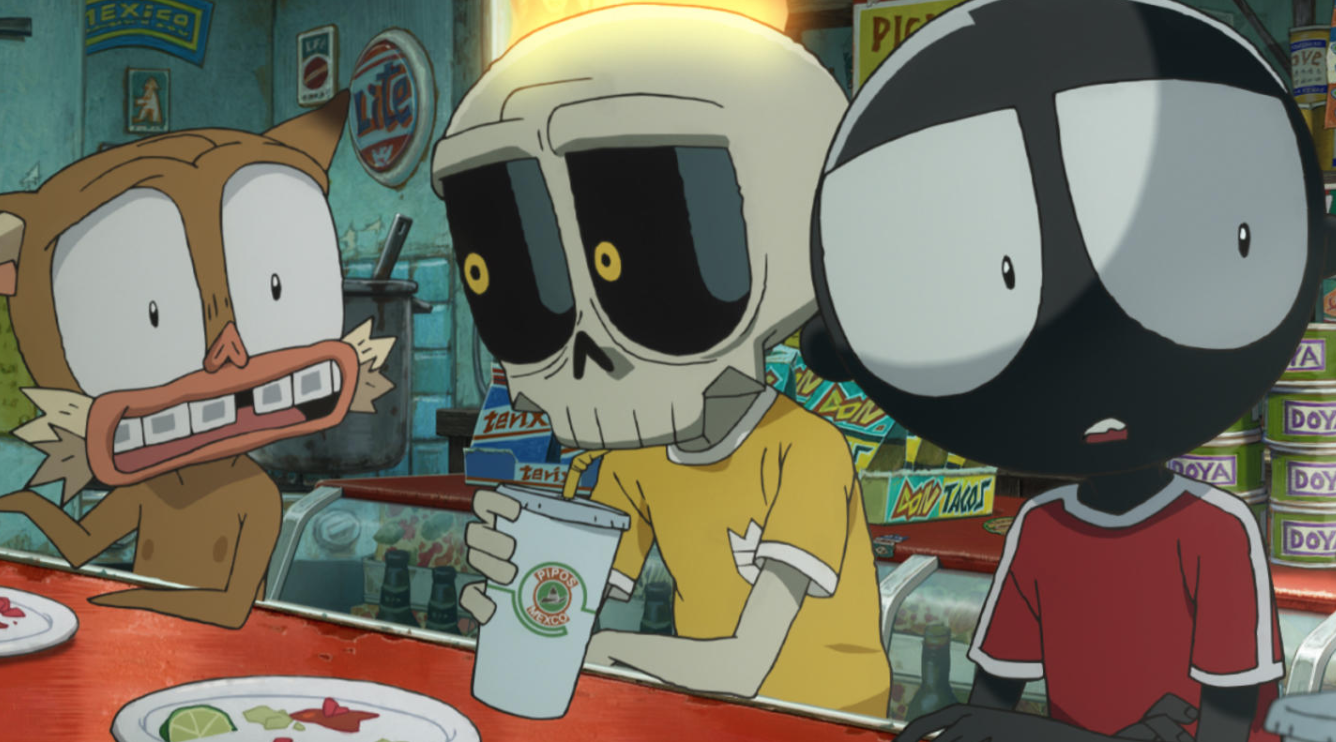 The story is centered on a strange black creature named Angelino, who is trying to make a living in the crime-ridden area of Dark Meat City with low-paying jobs and a flaming skull-man named Vinz for a roommate. One day during a pizza delivery, he winds up getting involved in a vehicle accident after spotting a mysterious beauty on the sidewalk and somehow this results in him getting chased by suited gangsters and SWAT teams who want him dead. The official reasoning for why he’s being hunted is due to having some mysterious power on account of him being half-alien, but Mutafukaz doesn’t really explain it too well, so it’s best to accept that Angelino is marked for death by a mysterious organization “just because”. 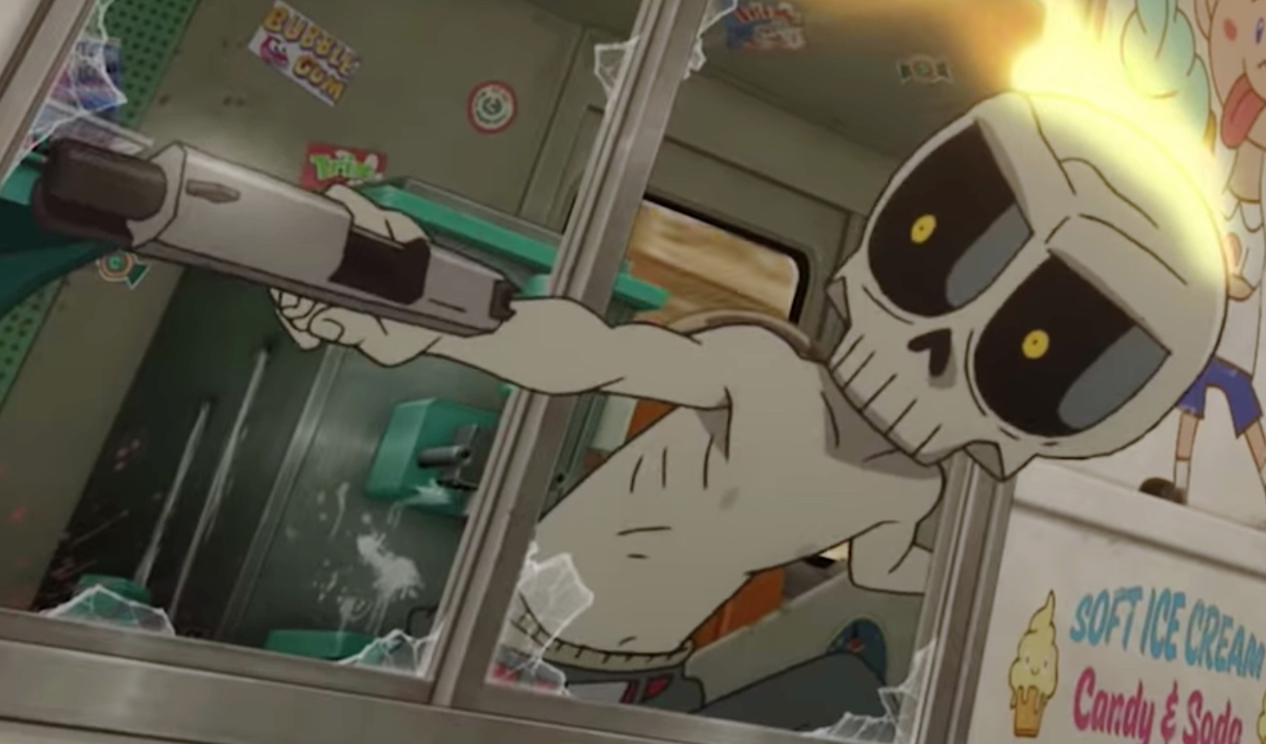 In fact, the phrase “just because” pretty much describes everything in this weird-ass movie to the point that I’m almost fully convinced this is what Robert Rodriguez would make if he ever decided to try his hands at animation rather than live-action adaptations of “animation”, right down to having Danny Trejo voice one of the characters. Mutafukaz’s plot is basically one long chase movie brought to life through action, set pieces, and comedic banter that mostly exist just to look cool. And I know “looking cool” gets used as criticism a lot, but it’s not an inherently bad way to entertain the audience unless you’re the kind of sad sack who can’t appreciate those John Wick films. The best way I can describe how to use “looking cool” correctly is that at the end of the day, you’re creating an engaging setting with your explosions and we learn something interesting about the characters in the process. That’s part of the reason why I wasn’t too big on Atomic Blonde. Although it had the action and world-building of John Wick, Charlize Theron’s character was way too impenetrable to carry that film for two hours.

Angelino’s character isn’t exactly unique, but I find him easy to identify with because he’s just a normal guy trying to get by when suddenly everyone in the world wants his blood. I wouldn’t say his growth throughout his near-death experiences is anything all that big either, but I do like how he comes to appreciate his poor life style after all is said and done because it comes with its own charms if you know where to look, and more importantly it didn’t involve getting sniped by Michael Chiklis. The other characters are all quirky and interesting as well for the most part, and while the villains aren’t exactly well fleshed-out, it’s hard to dislike them because they have a lot of fun doing what they do, plus they always get their comeuppance in viscerally satisfying ways. 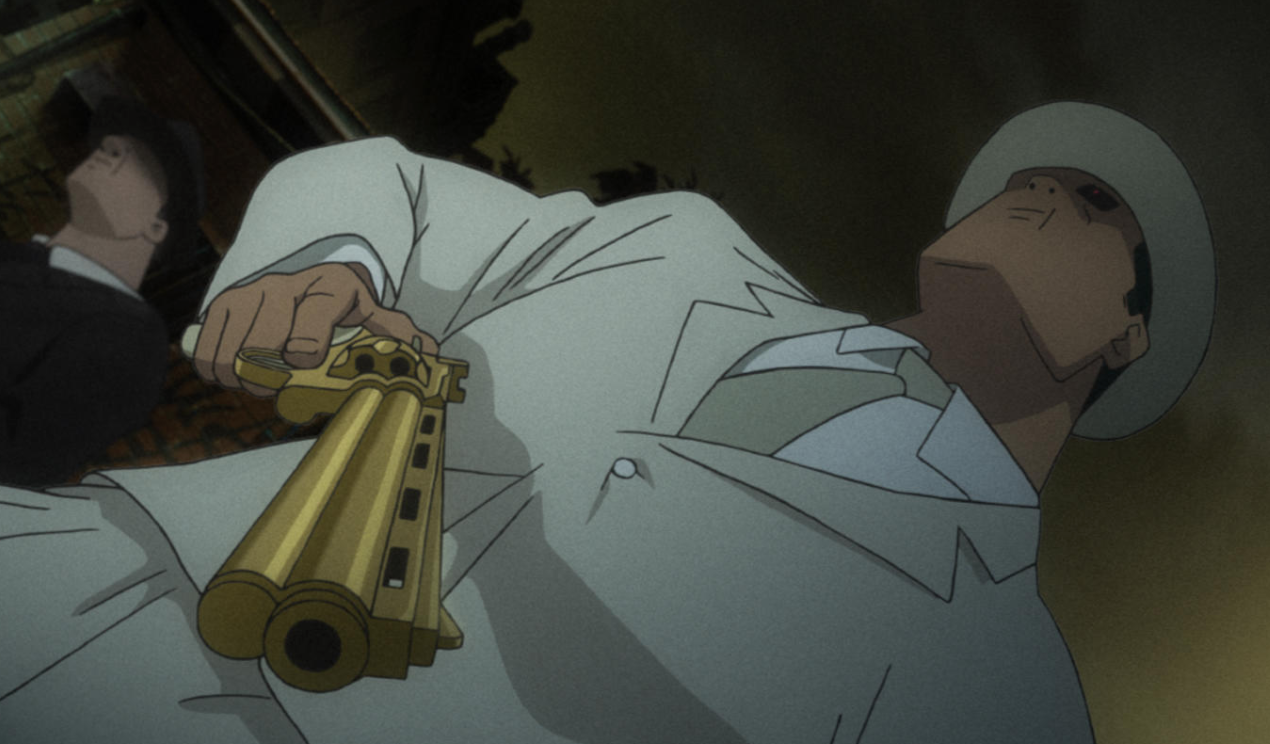 That said, it can be hard to keep track of all of them because there are so many camps that get involved in the plot from a group of wrestlers who seemingly come out of nowhere to a group of aliens called the Machos who want to take over the planet out of nowhere to a large black gang led by a man named Shakespeare who gets involved by chance and then shows up in the finale out of nowhere to save the day. The best way I can recommend how to keep track of everyone else is that if you’re wearing a suit, you’re a bad guy. If you’re not, you’re not necessarily a good guy, but it can’t hurt to stick around for a bit when the bullets start to fly. And before some of you skeptics ask this question, no there’s no explanation for why a living skull or a talking cat is walking amongst normal humans like it’s nobody’s business. That’s just the way Mutafukaz’s universe works, and questioning the logic would not make the movie any better.

As for the set pieces, they’re all really exhilarating with top-notch action animation and deranged fluidity to the movements whilst also being wickedly funny in general. There’s a scene where Vinz’s flaming head gets used in combination with a can of aerosol in order to function as a makeshift flamethrower, and it’s just as cool as it sounds. That said, I think the movie peaks when Angelino and Vinz get involved in a high-speed car chase whilst driving an ice cream truck. It’s kind of hard to top driving away from death whilst ill-fitting happy music plays and defeating bullets by smearing dessert on the car windshields. The final fight scene of bullets and fisticuffs definitely tries, but it can end up pretty exhausting if you’re like me and get tired of having too much of a good thing. 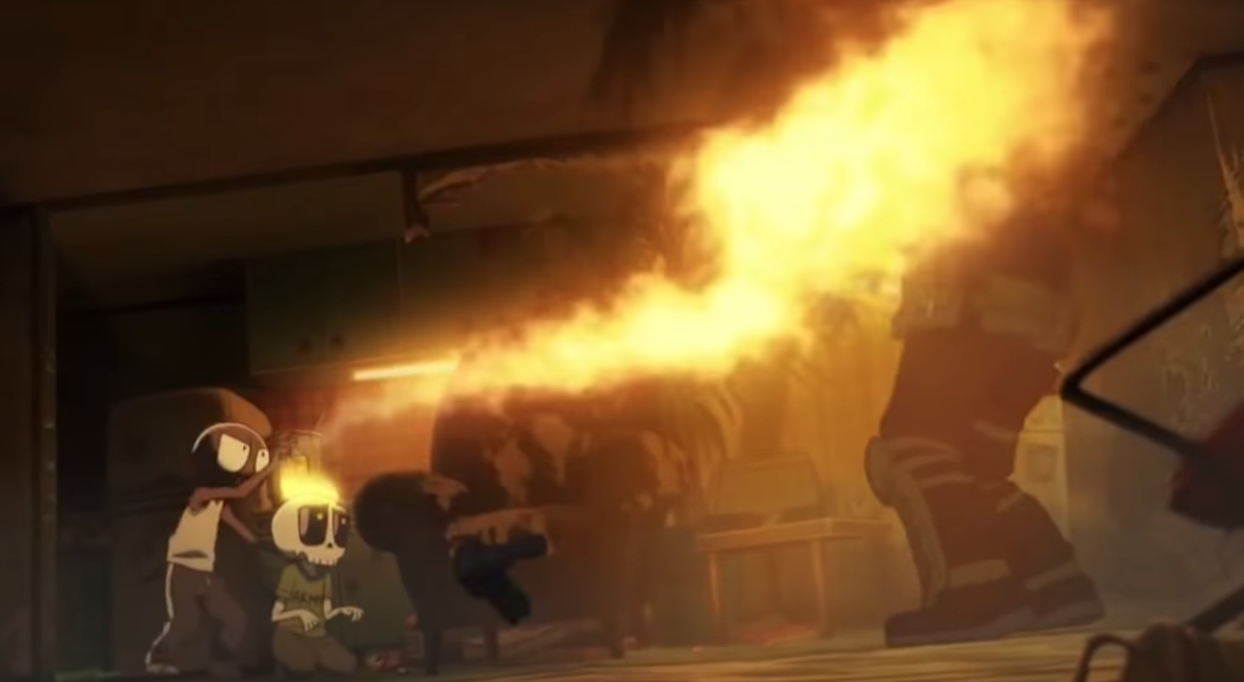 Honestly, how much of the movie you enjoy depends on if you enjoy campy anime films like Redline and how much of that camp you can digest with the low amount of substance provided. I will say that Mutafukaz’s black humor and more relatable protagonist does make sitting through it easier than I do with Redline these days, but let’s not pretend it did everything better than Madhouse’s cinematic opus in order to end up as the more watchable film. The love interest barely has any screentime and doesn’t do much but betray and help Angelino out without actually saying who she is. And while the whole mafia blackmailing JP to lose subplot was both overcomplicated and cliched, at least I understood what was going on when it was put into focus. Mutafukaz literally ends with the reveal that the Machos are on the moon, ready to invade again, and all I can think is “seriously, who the fuck are you guys? And you’re going to take over the earth when your bodies freeze to death if you so much as visit Canada?”.

Oh and in case you’re wondering, yes the soundtrack to this movie has some bumping beats. Nothing quite as memetic as “untz untz untz untz”, but it really complements the setting. The English dub is really good too, and is worth watching just for the reference to Grand Theft Auto alone. I mean it’s not like the film has a Japanese option (at least not yet), so unless you want the French to sweet-talk you, you’re pretty much stuck with the English version. But hey, at least you have that option. Meanwhile, I can’t watch Miraculous: Tales of Ladybug and Cat Noir in anything but Adrian sounding like Bryce Papenbrook and that one voice he uses for everything. 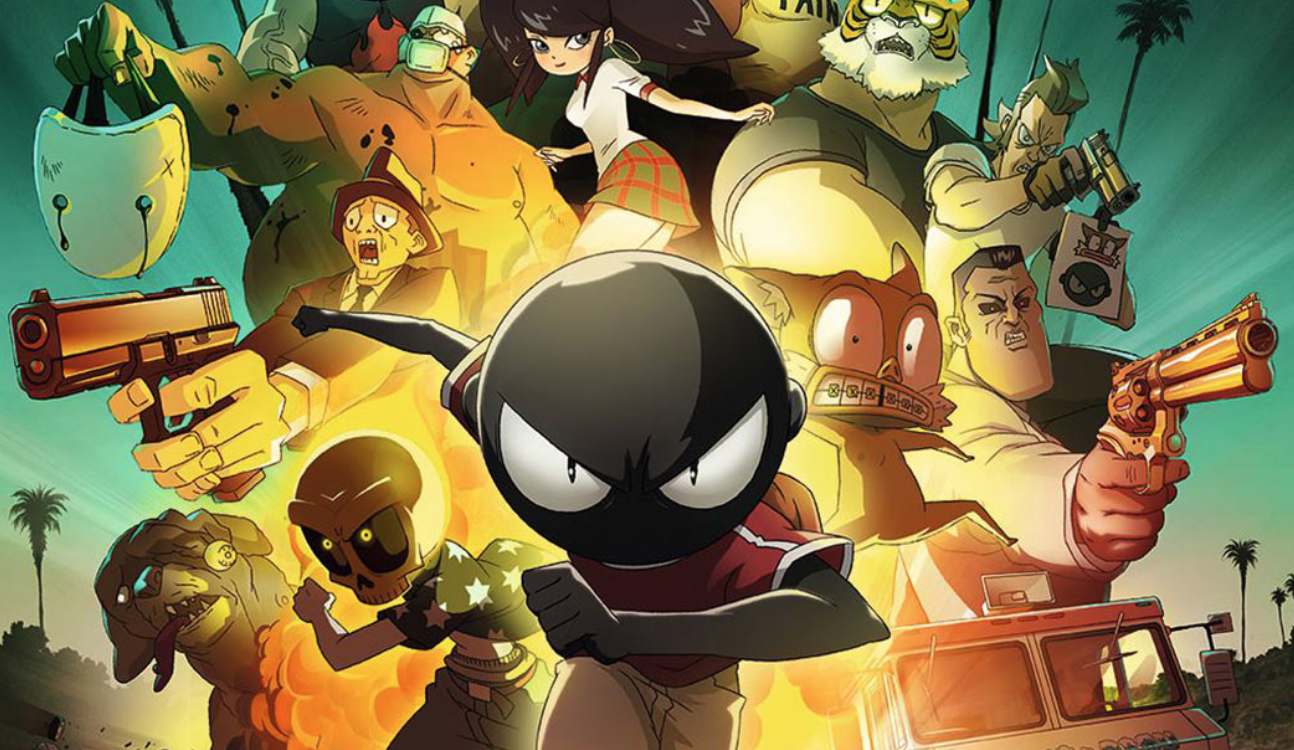 On the whole, I’d say Mutafukaz is worth watching if you can accept the fact that the lore ultimately doesn’t go anywhere and the love interest is about as token as a bad guy in a Titanic movie. It’s more of a film you watch for the visuals rather than the plot, which keeps it from being a great movie, but it’s not exactly style over substance either. A lot of the set pieces do exist just to be cool, but it does have an underlying heart with its cartoonish take on living in the slums that’s hard to deny. Give it a try if you’re looking for something different in the world of animation, but don’t come crying to me if your ears bleed from RZA trying to voice act.