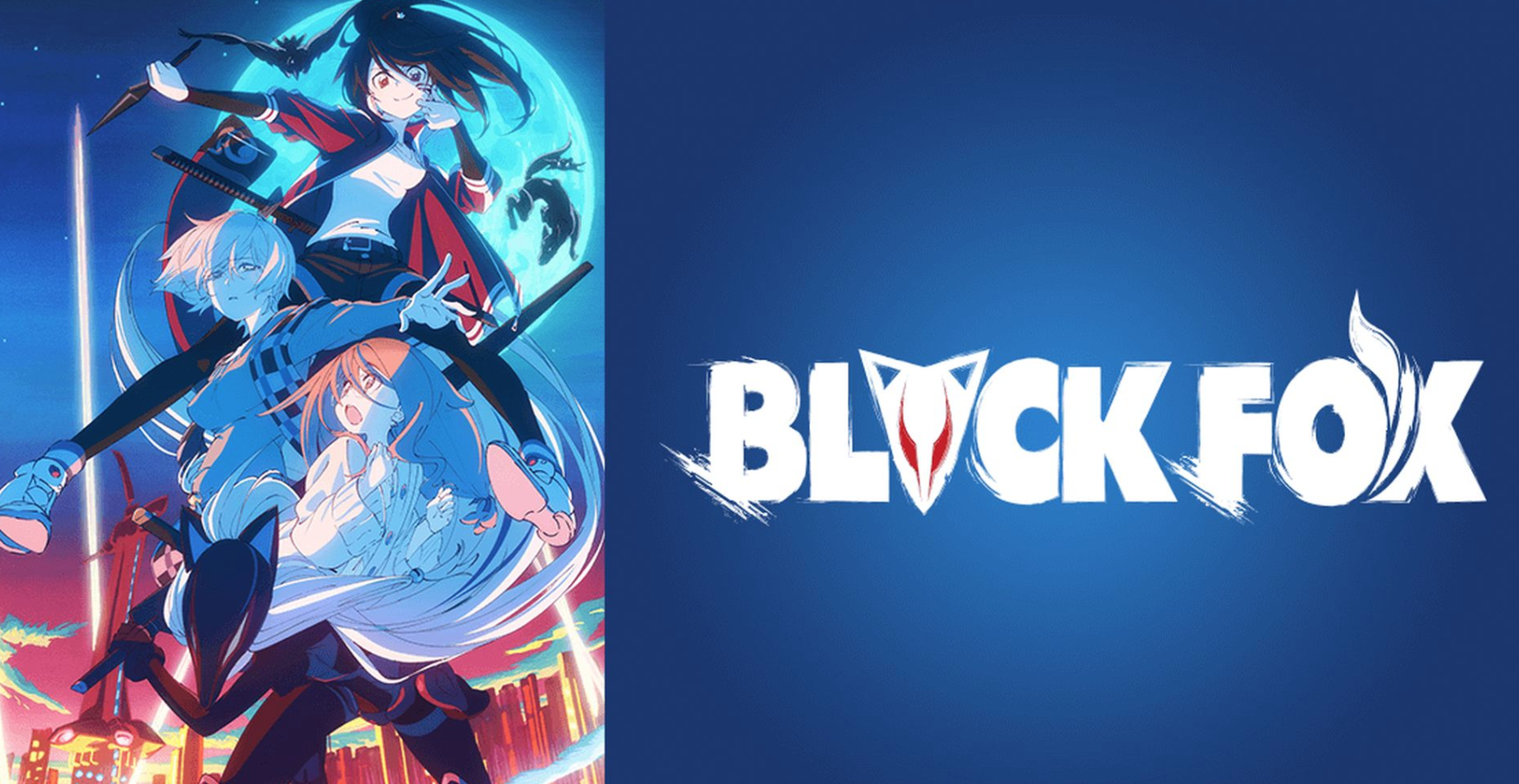 With how fiercely protective anime fans are becoming of their favorite medium, I think it’s as good a time as ever to remind people that the majority of anime isn’t really worth protecting.

Boy it sure has been a while since I’ve written anything on this blog, hasn’t it? Wonder what I should talk about to remind people of my existence? Do I jump in on the Demon Slayer train like all of the fake fans who only started watching the show when Episode 19 happened? Do I gush all over Promare and its amazing soundtrack? How about I give attention to that Mo Dao Zu Shi show that’s getting critical acclaims on a lot of anime sites despite the fact that it’s about as anime as Castlevania? Or how about that new anime movie that just came out on Crunchyroll, Black Fox? Because people like that, right? 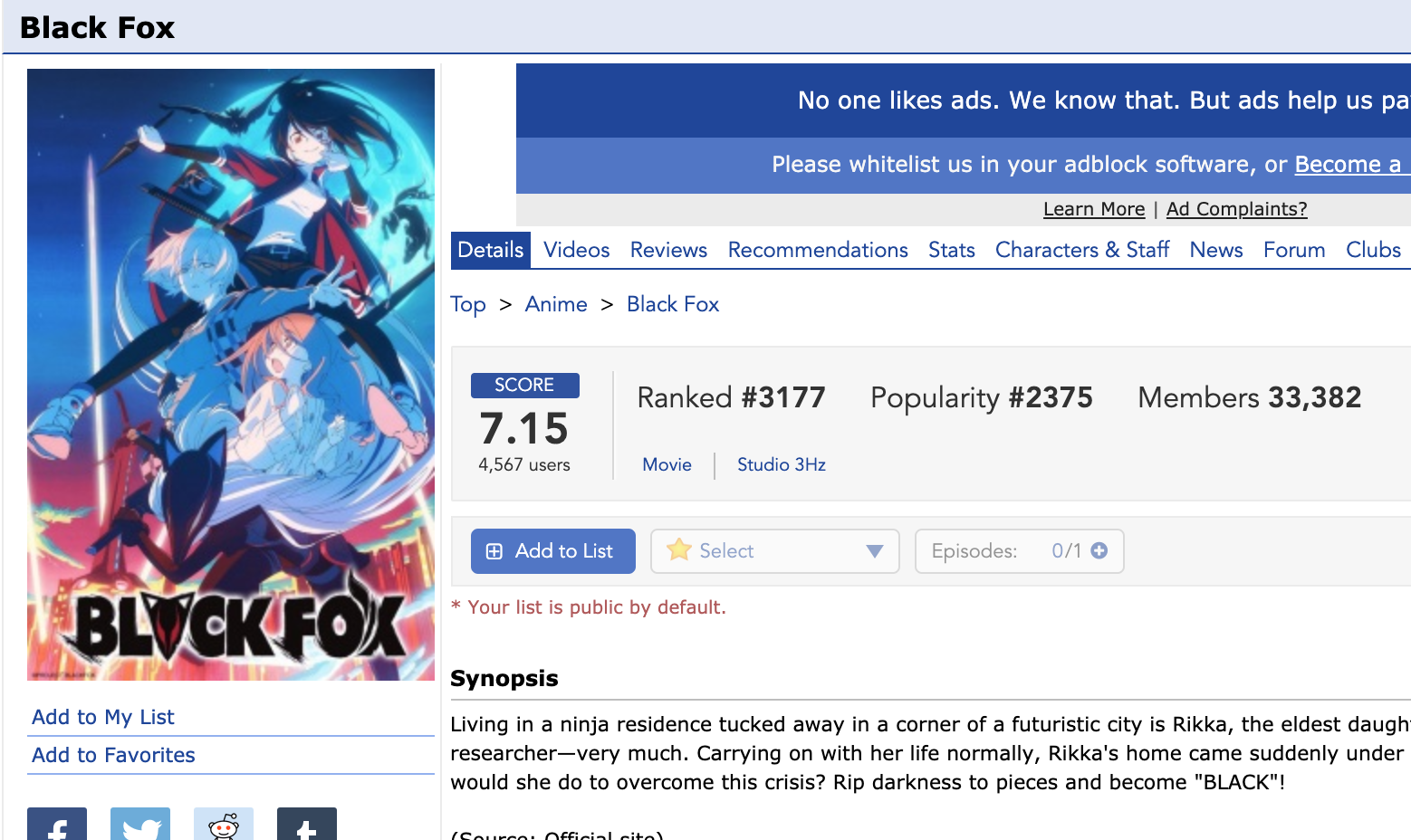 …well when has something being bad ever stopped it from being fun to dissect? 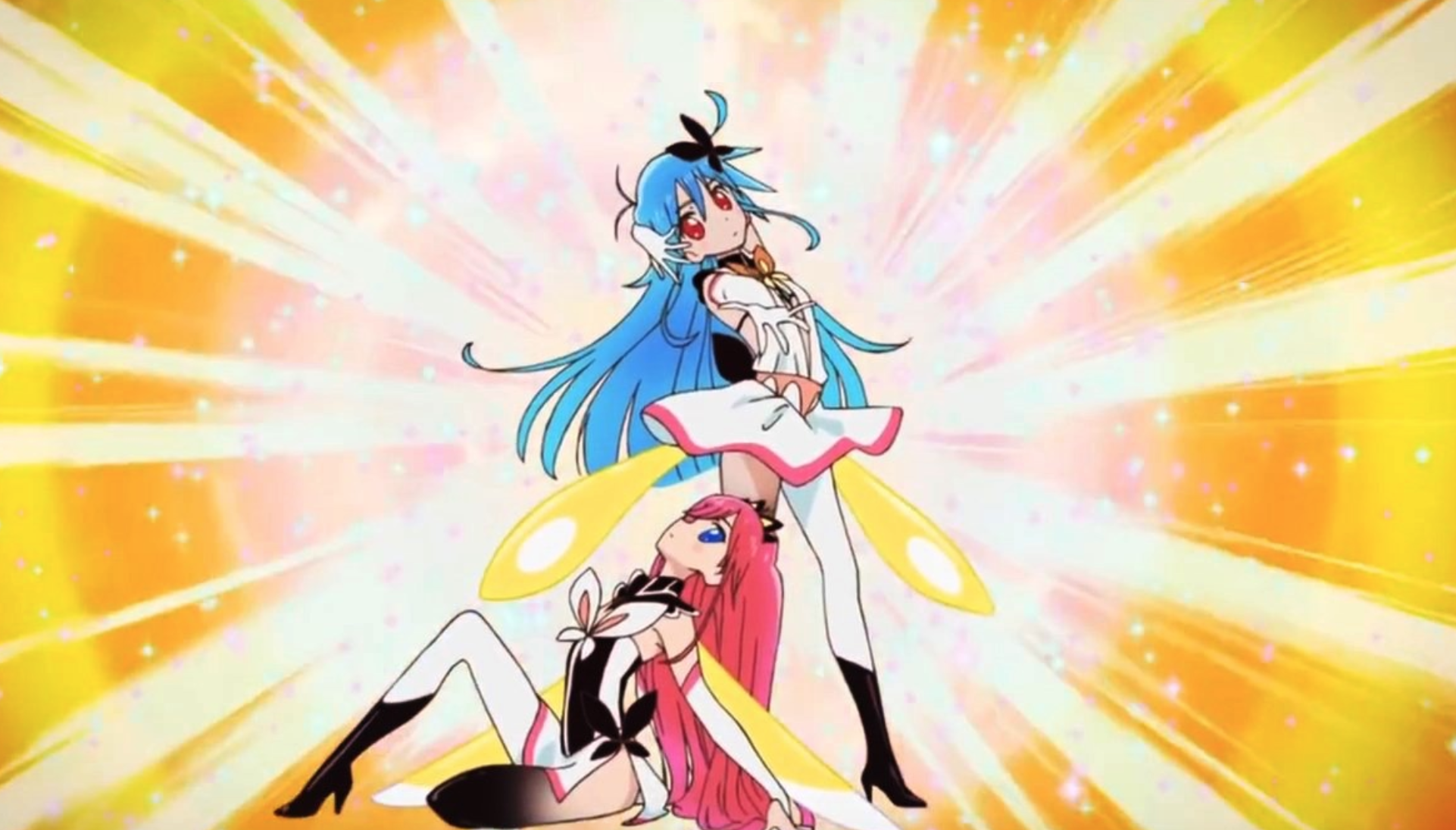 Studio 3Hz is a somewhat odd production company within the anime world. They’re not big enough to be in the mainstream like Shaft or Wit, but if you know of them by name, chances are you like them. After all, who doesn’t love Flip Flappers? That beautifully animated coming-of-age story of two girls discovering themselves and apparently being gay? Perhaps you remember the stylistic coolness that was Princess Principal? That show about the school girls who are secretly spies for a fictional kingdom that somehow has London in it? Who didn’t think Gun Gale Online was a massive improvement from the mainline SAO series? Well it was, if only because Sword Art Online has been getting continually worse to the point that it’d be less painful to participate in a UFC cage match. 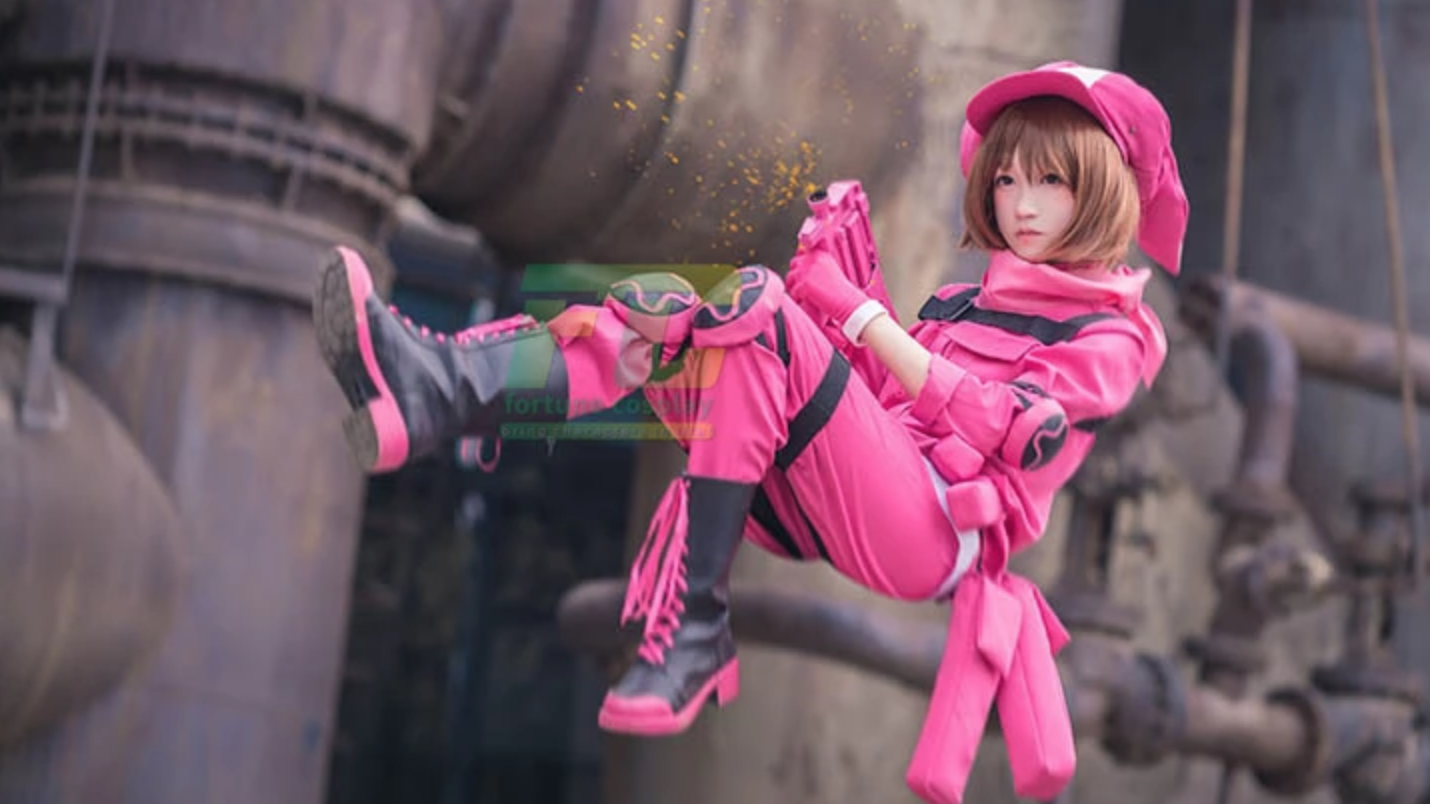 Yes, 3Hz anime tend to be loved by those who watch them and if you hang out in the big anime communities, you’ll generally see the vocal minority praise them for how ambitious they are. An opinion not shared by Japan for the record, because a lot of 3Hz anime don’t do well over there, with Flip Flappers in particular bombing hard to the point it sold about as well as Fire Force is doing right now. I don’t always agree with Japan on everything, but I really have to agree with them here, because I don’t see what’s supposed to be entertaining about 3Hz anime myself. They’re always visually pretty spectacles focused on cute girls doing cool things…and that’s it. Never an interesting story besides “isn’t this cool” and there aren’t any particularly memorable reasons to remember any of the characters in those shows because there’s nothing to them besides “aren’t we cool”. Also, said characters may or may not be lesbians because every female friendship has got to be yuri-bait these days.

In fact, the reason I never reviewed any of their anime on here until now is because of how uninteresting I find them. I mean what am I supposed to say about Gun Gale Online? Twelve episodes of Llenn getting good in a video game to overcome height insecurities that are only brought up in passing? Yeah that’s interesting to talk about if you’re someone who plays those SAO video games (which I obviously don’t). The only reason I finally worked up the motivation to give a full review to their newest anime, Black Fox, is because this is 3Hz’s first ever feature-length film not based on any of their existing properties, and as someone who cares a lot about production companies realizing the potential of anime with a feature-length format, I was genuinely interested in seeing if this company could succeed where everyone who wasn’t Shaft also succeeded at. 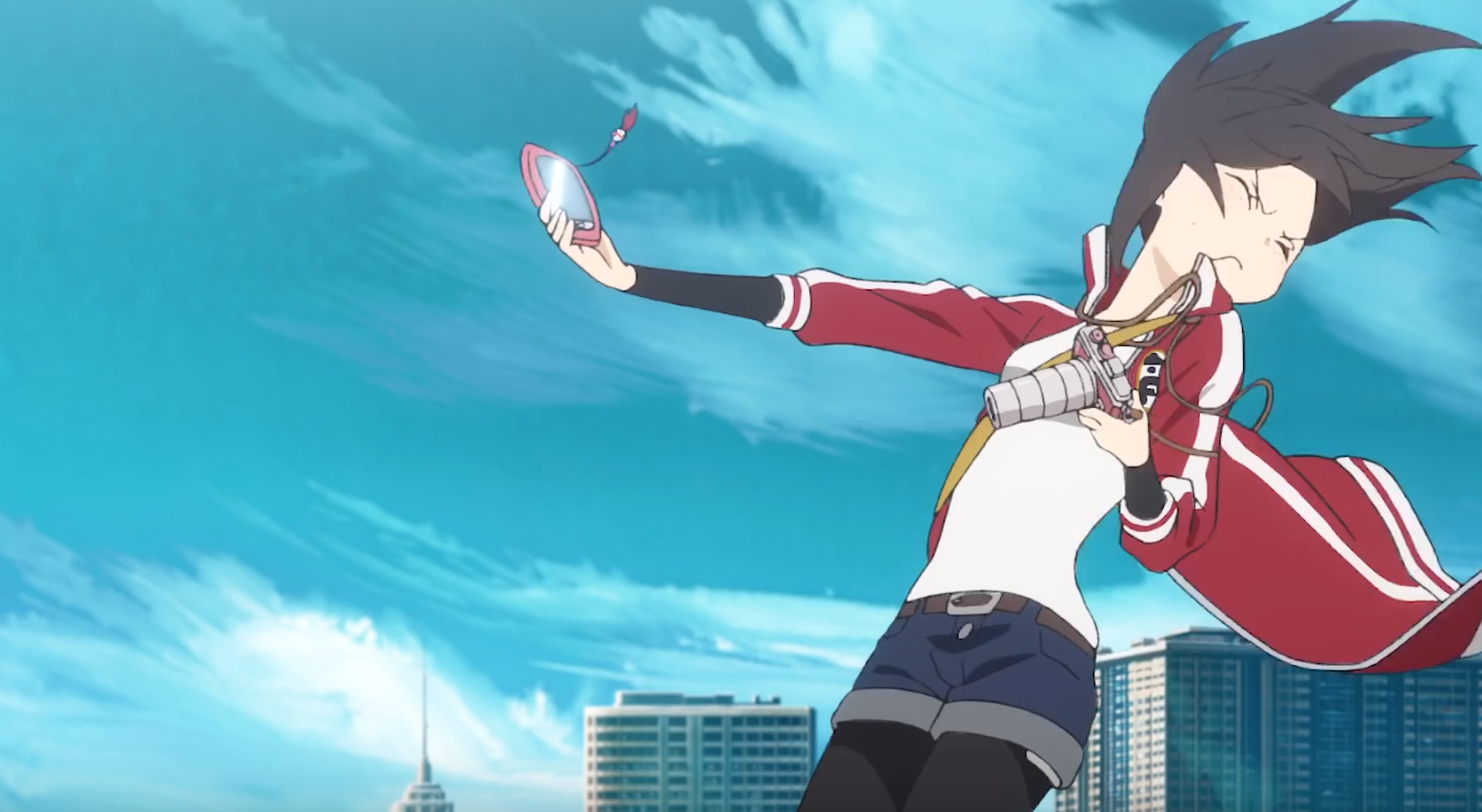 Sadly, warning bells rang when it was discovered before release that Black Fox was actually meant to be a full-length series that ran into production issues and thus became a movie version of the first few planned episodes, so it was doomed to not be on the same level as films like Maquia or A Silent Voice from the get-go. I don’t really know much about the particulars regarding how that happened, but even if you didn’t know that, the fact that this got released on Crunchyroll so early should be a giant warning sign that we’re getting direct-to-DVD quality with this project.

Even the entire premise feels cheap as hell. A female superhero story about a masked ninja taking revenge against the evil corporation that killed her family with the help of two other super powered girls by her side? Given how the superhero genre is about as oversaturated as isekai in today’s world, you’re really going to have to do a lot to stand out in that field.

And when I say Black Fox is a superhero story, I mean the bad kind of superhero story. The kind that thinks the first Iron Man film totally holds up nowadays and thus all we need for substance is explaining the protagonist’s backstory and then having her defeat some poorly-developed villain in weightless action scenes and gaining some equally poorly characterized allies without learning anything beyond “friendship is magic” and “bad guys are bad”. Just describing the plot is a big enough indicator to tell you that this anime is not going to be as entertaining as Amazon’s The Boys. 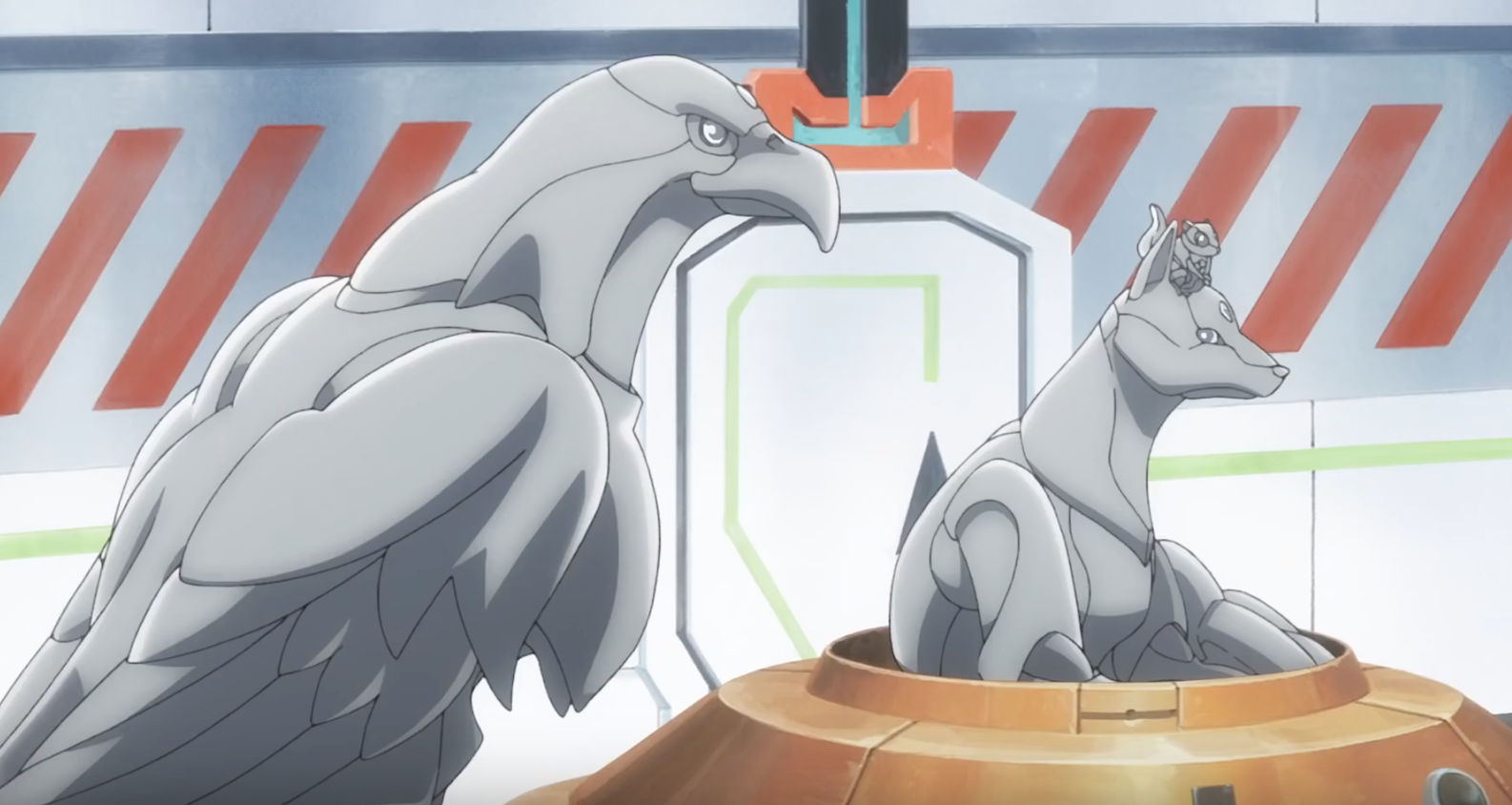 The movie starts off with the main character, Rikka, as a little girl training under grandpa to become a great ninja in a tense action scenes that’s soon revealed to be a joke, thus sapping away all the coolness of the film’s first few opening minutes. After she grows to the age of a college student, her family is killed on her birthday and she escapes with the family robots, vowing to get revenge on those whose faces she remembers. Said robots are apparently the main reason her family was killed in the first place and I honestly have no idea why because all they do is basic surveillance and prevent Rikka from killing anyone because anime is obsessed with not crossing the line. Nevertheless, it’s a serviceable backstory to make us care about the lead, as well as the only part of the film that wasn’t obviously rushed.

Rikka later becomes a detective’s assistant, using her ninja powers to find lost cats whilst searching for clues regarding her family’s killers. This is where the pacing becomes incredibly rushed in order to hit a lot of the standard plot points. you’d expect from the superhero genre And while it’s true that shows like Demon Slayer and Gurren Lagann can be engaging despite not being particularly original, do any of these plot points sound particularly engaging to you? 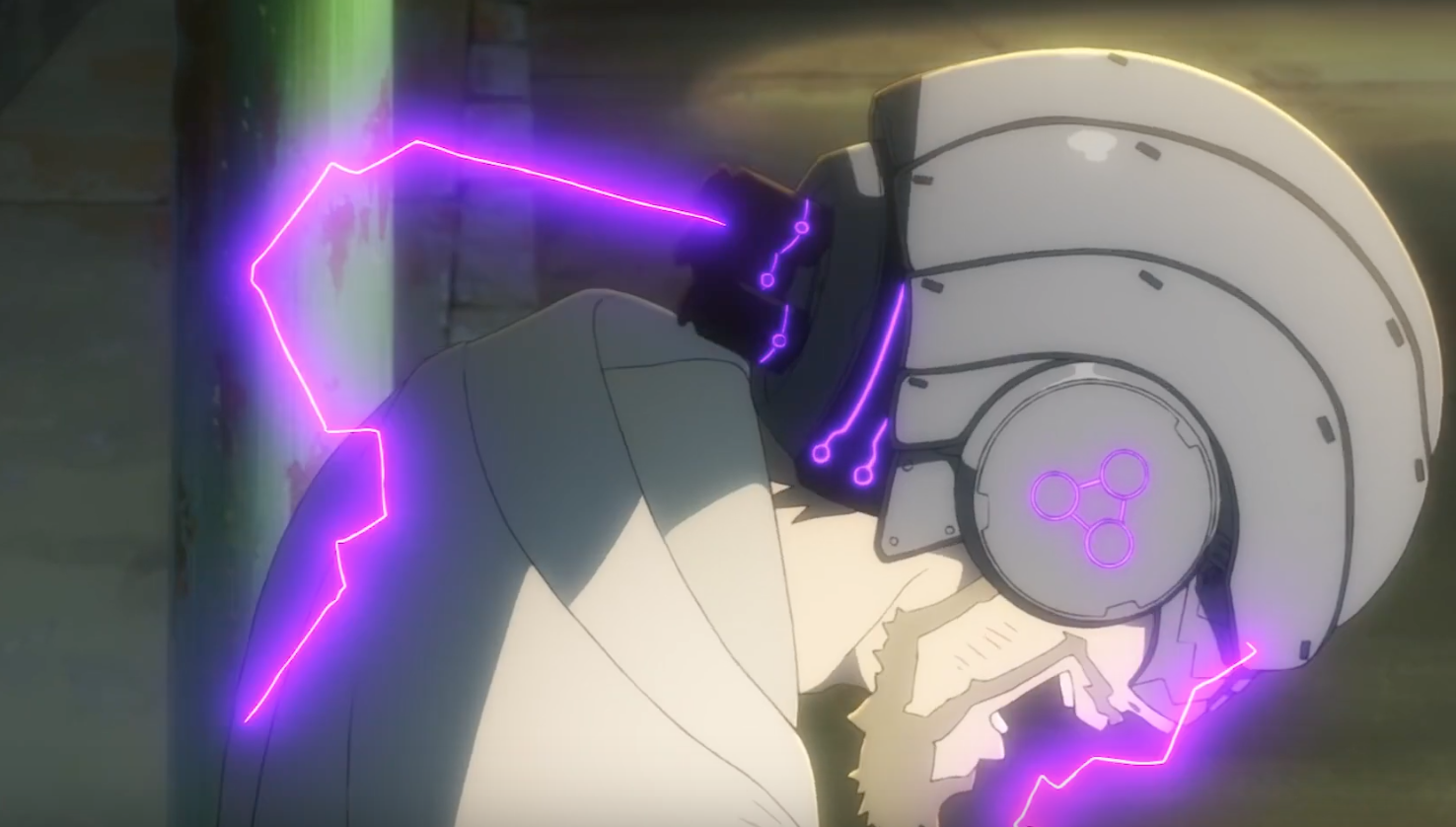 If you didn’t fall asleep reading those plot points, then you might enjoy Black Fox. But the fact that I describe what happens in it so basically highlights the main problem with 3Hz’s anime, and this movie in particular. Everything exists “just because”. Notice how I never mentioned anything related to the father’s motivations or the consequences of having a big-scale battle in the middle of civilization. That’s because there are none. It’s like watching one of those Nostalgia Critic reviews that are two minutes of actual reviewing and 30 minutes of skits or pointing out specific logic holes that can work in support of something, but can’t hold up a review by itself.

By the end of the movie, the only person we learn anything about is Rikka, and even then it’s mostly Past Rikka we sympathize with. Present-day Rikka does go through some struggles in regards to her new friend, but excluding the fact that it’s done in an incredibly basic manner, Rikka does not actually change as a person due to said struggles. The most she goes through is deciding she will no longer kill those who wronged her, which isn’t interesting character growth at all. That’s common sense that’s hard to rein in when the bad guys are one-dimensional lunatics who killed his former colleague simply because he had an inferiority complex. An inferiority complex towards what? A scientist who can invent talking animal robots that do jack shit?

Do you remember the villain from Promare? Do you remember how he was also an egomaniac for the sake of being one, but what made him interesting was how he hid it underneath semi-convincing arguments about how his vision was for the good of humanity until you realized he could have easily sacrificed himself to save humanity from getting fucked? That’s the sort of flavor you need to add when writing anime madmen. A bad guy who exists for the sole purpose of being a bastard is not good storytelling. It leaves immersion-breaking plotholes that can drain the Indian Ocean, and it definitely does not work in superhero films, which kind of demand both the protagonist and the antagonist contrast each other in interesting ways. 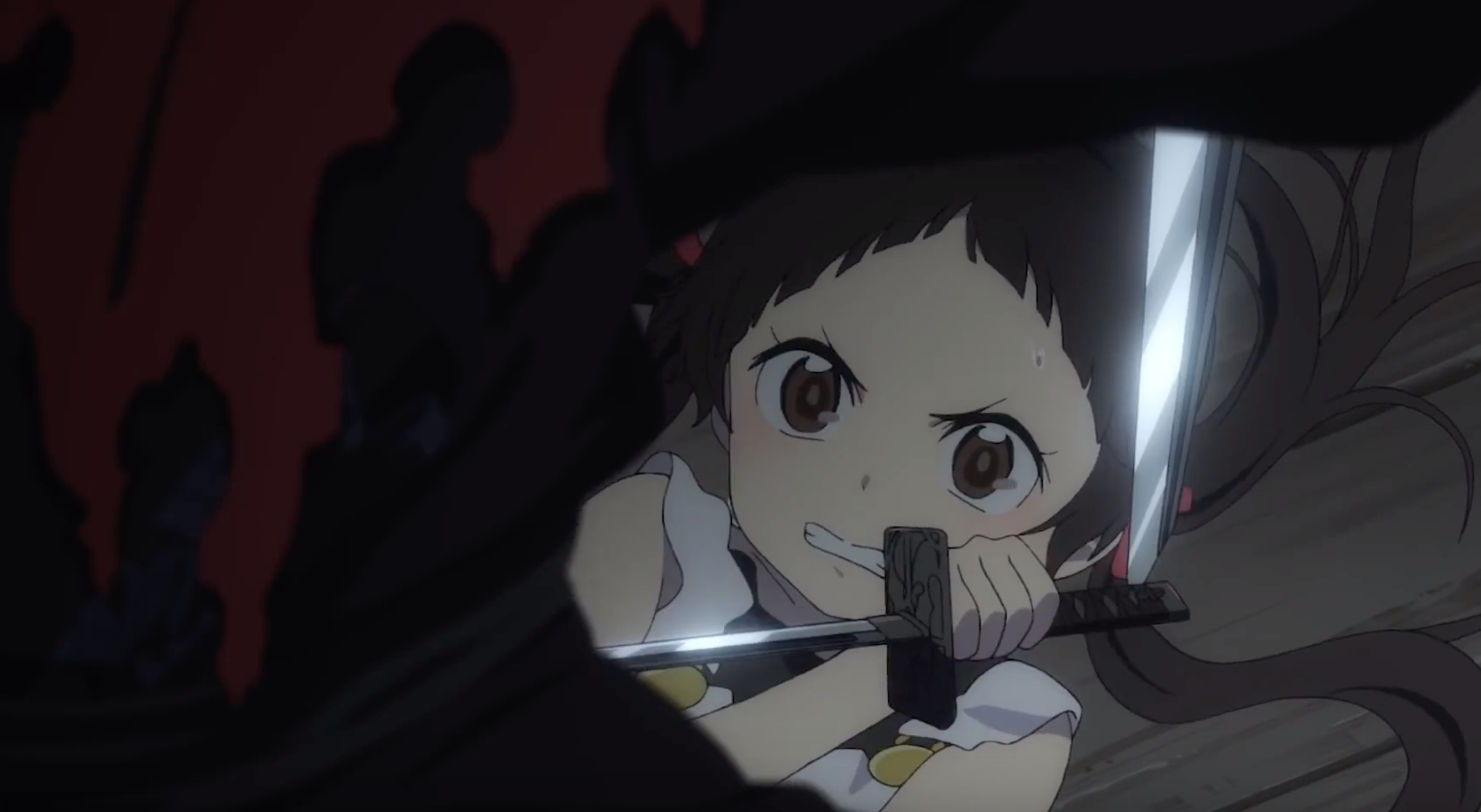 And as for the decent animation and action that usually accompanies 3Hz works, it’s honestly not up to their usual standards in this film. There’s a lot of distracting CG, particularly when large crowds of people have to be animated, and the action scenes are kind of shit. Too many times the camera pans up close to the character so we see them strike the screen rather than the actual opponent, and when the camera bothers to pull away, the actual choreography is just uninspired. Did I mention the director of this anime did Robotics;Notes and Run With the Wind? He’s about as suited for action as China is for freedom of speech.

Is it really a wonder nobody talks about this movie after the brief attention it got last weekend? Most people who know about Black Fox want a sequel to this film because of what it could be in the future rather than what it actually is. And I’m not saying it couldn’t improve massively with a follow-up, but anime are like relationships in that they’re generally addicted to bad habits and the odds of something healthy arising from a broken subject are like winning the fucking lottery. I dunno about you guys, but I don’t like those odds. Throughout my time with Black Fox, I never got any indication that it wanted to do something to stand out amongst the superhero genre besides being yet another “superhero team fights villain” story. And 3Hz has never made an anime where their visuals actually said something besides “don’t we look cool”? To me, the Kabaneri movie is cool. Hobbs & Shaw is hilarious. Your anime aren’t camp, 3Hz. They’re skeleton stories brought to life by people who follow the Ridley Scott method of making art. 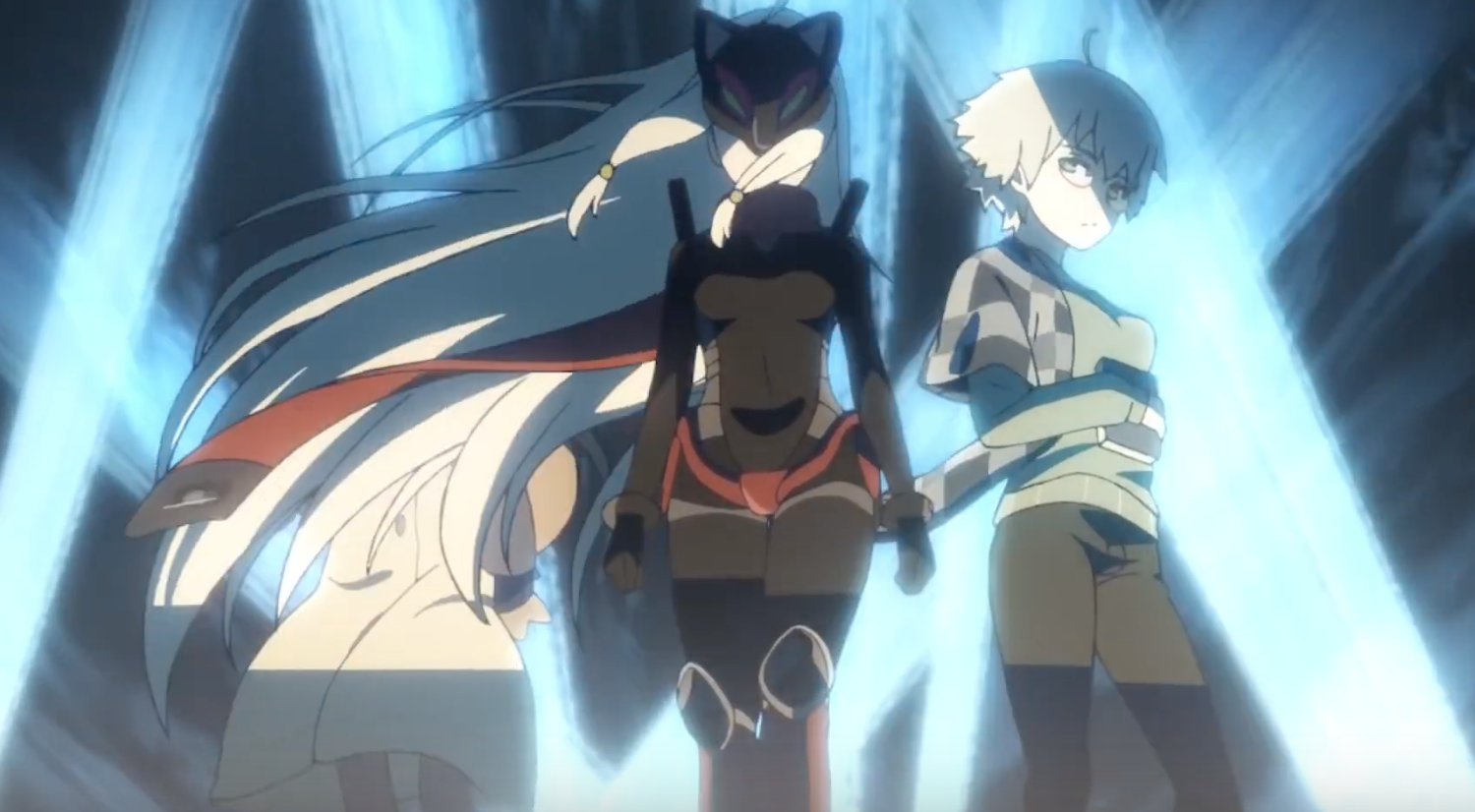 Black Fox does not have any real reason to exist that’s not related to the committees who produced it. As animation, it’s nothing fresh. As a superhero story, it’s nothing fresh. Even the all-girl superhero team angle isn’t something you could argue given how we’ve got an awful-looking Charlie’s Angels reboot and a similarly awful-looking Birds of Prey movie on the horizon. Also, need I remind you that Rikka is pretty much the only one who puts in any contribution until the very end? Yeah, totally a shining example of how to make an all-female led action story. Sure it’s not pushing feminism with the mindset that allowed Pamela Anderson to have a brief movie career, but sure as hell isn’t giving us anything in return.