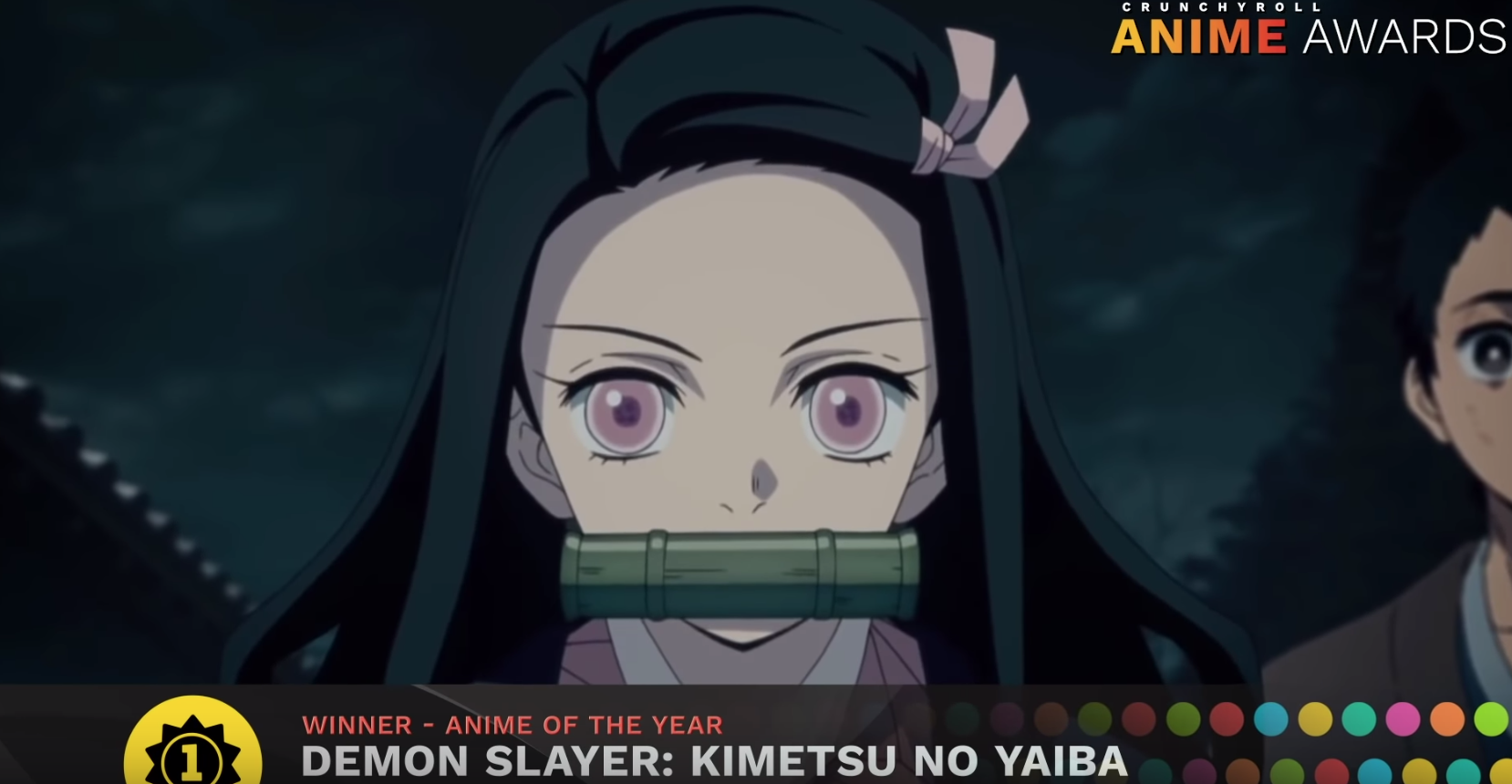 For some real salt, try looking at tweets that praise Demon Slayer for winning Anime of the Year at the Crunchyroll Awards and searching for a response that doesn’t bash it.

The Crunchyroll Awards show is still garbage after four years what with the inconsistent audio, terribly planned skits, rushed presentation for six of the awards, and the less said about that rap song the better. When it came to the actual awards though, they were fine. No show really dominated this year although I should point out that despite winning three awards, Kaguya-sama was put in two award categories that it had practically no competition with (Best Couple, Best Comedy). I am a little surprised Askelaad from Vinland Saga didn’t win Best Antagonist, but the salt online makes it worth it imo.

And as for Demon Slayer winning Anime of the Year, I mean what did you expect? I thought the show was good. Lots of people around the world think the show is good. It makes headline news in Japan and all that for how much it sells. But you wouldn’t know how much people like Demon Slayer if you go to r/anime or any popular comment on Anitwitter praising the fuck out of the show, including King Vader. I’m assuming MyAnimeList and probably some other sites I can’t remember off the top of my head have become salt mines as well. Certainly doesn’t help that Gigguk joined in on the salt with one of the most braindead tweets I’ve seen from the guy. 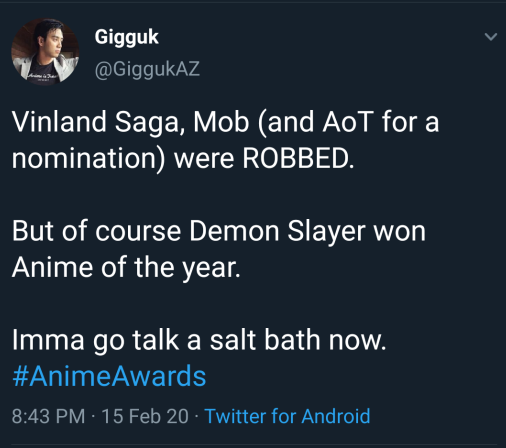 Oh no, these three mainstream anime I like lost to a mainstream anime I don’t like as much, but was immensely more popular than said other three. You see why I don’t like this guy’s videos? Because all of his jokes and opinions come from r/anime aka “fuck that subreddit and its obnoxious hug-boxing, downvote-happy users, poor sense of humor, and horrible podcast”.

I don’t have to justify my opinion on Demon Slayer because everyone has already said everything that needs to be said about the show at this point. And I don’t really need to rag on the haters either because as per usual, they’re just a vocal minority who like elitist bait over what gets popular in Shonen Jump while the majority who love Demon Slayer either don’t comment or don’t even care about the Awards show in the first place. Yeah that’s probably ironic coming from a guy who is kind of an anime elitist and ranks Carole & Tuesday and Vinland Saga as the two best anime from the last year, but like I’ve said many times, I’ve come to accept that not everyone is going to see things my way. Lots of people think Weathering With You is just a rip-off of Your Name when what I saw was completely different in almost every way aside from structure. I’ve accepted a long time ago that a lot of anime fans just love to take things at face-value, and to be fair, there are anime that get by with good execution. Like, say, Demon Slayer. 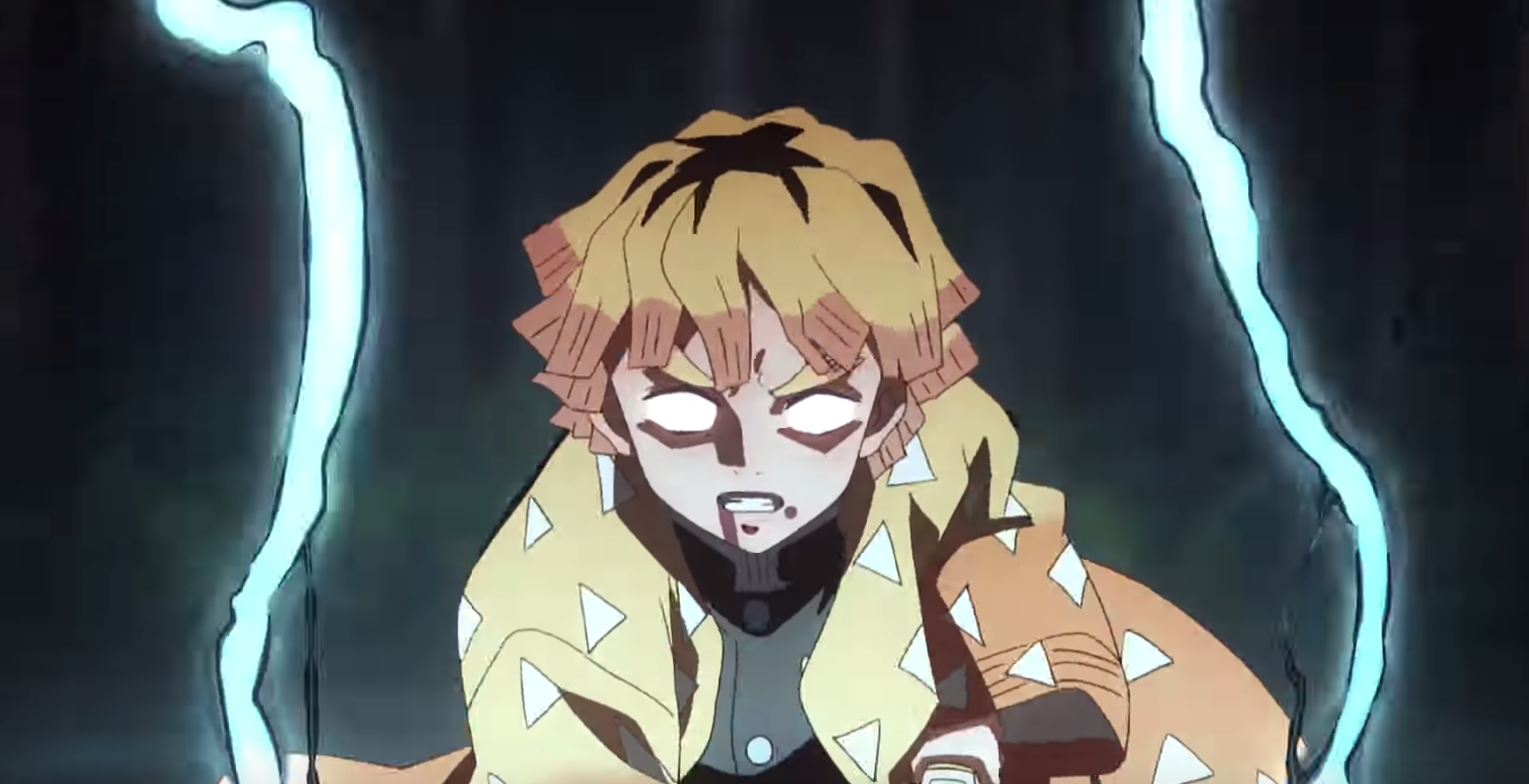 Even if I did dislike Demon Slayer, it’s not like it swept the awards this year the same way Yuri on Ice and Hero Academia did. And it’s a very mainstream show that got a lot of people into anime, so it had to win some big stuff. Admittedly, that makes it less funny to meme, but believe me, the salt when people’s favorite anime didn’t win was more than enough. Seriously, you know an awards show is a bad idea when people dogpile on an anime just because their favorite did not win and give you horrendous reasons that nobody gives a shit about to your face regarding why it should have won. I don’t give a crap if Vinland Saga was an epic anime to you with great character writing and an epic story that Demon Slayer lacks because “shonen is inferior to seinen”. It’s hard to care about those complaints when you disagree with these same people that the second half of Carole and Tuesday was bad.

It is just so hard to sympathize with an angry fanbase when they call this year’s Crunchyroll Awards the “Demon Slayer Awards”, when said show they hate won the same amount of awards as Kaguya-sama. My personal favorite anime only won one award (and to be fair, if it didn’t win Best Score, I would have really questioned the results even if all the other nominations were good too), but honestly I didn’t expect it to win anything else because it doesn’t have the greatest online reputation, although most of my real-life friends love the anime. Yeah I did expect Vinland Saga to win more than one as well considering it was a great middle ground between casual and elitist. Certainly more than Shield Hero. And by the way, how did Billy Kametz win that English VA award? The clip they used for his performance had horrible voice acting, especially compared to the Konosuba dub they showcased at the ceremony. 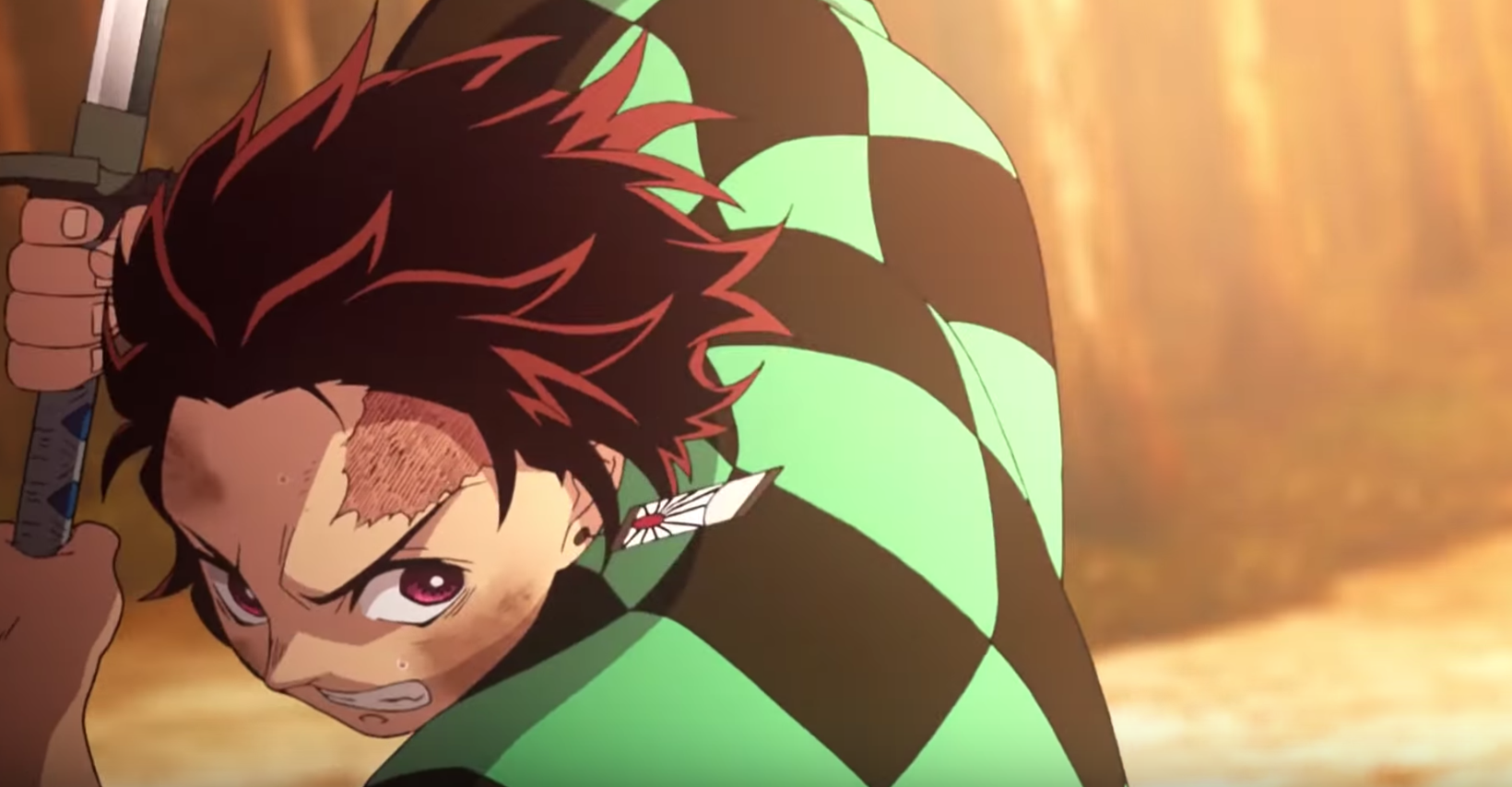 And the reasons they give me are just not good, because you could apply the logic they give to any anime. Oh no, the story is bland. Oh no, the characters are mediocre. Oh no, the animation carried shit. When I criticize an anime people like, I tend to go for something specific to the anime and pick apart how it’s a fatal flaw. For example, when I say I don’t like Somali and the Forest Spirit, I compare it to indie games with the same premise, how that style of story is saturated in that market, how just making it anime doesn’t alleviate the saturation, and how a lot of the sad stuff is just hinted at with too much time spent on building up to it and so on and so forth. Yeah the characters in Somali are kinda meh too, but why do I think they are meh (not actually going to answer here though)? And to bring the subject back to Demon Slayer, why do you think the cast of that show is meh? Because they’re Shonen Jump stereotypes? That just sounds like you don’t like shonen then, because while I’ve never considered the cast from those types of shows to be the greatest characters in existence, a lot of them do have complexity.

I would never say, Yugi, Yusuke, or anyone parodied by RDCWorld1 is bland. I wouldn’t even go as far as to say Hinata from Haikyuu is bland. He bores me because he’s too much of a cliche underdog character, but he’s not bland. Especially not in Season 4. And I would never call Tanjiro or Nezuko or any of the other Demon Slayer characters bland either. In fact, I think they’re great characters with Tanjiro & Nezuko having a unique brother/sister dynamic. Sure they’re not getting constant character development/growth with each episode, especially compared to Askelaad, but it’s very rare you’ll find an anime that does something like that, even amongst the good ones. For example, Thorfinn got almost none of that growth in Vinland Saga. I’ve been rewatching Legend of the Galactic Heroes recently and there is so little character progression that goes on in a large chunk of the second season, which is fine because it gets compensated by the world-building and plot machinations, but it’s not the kind of storytelling that gets me excited. Doesn’t mean Galactic Heroes isn’t a good anime. Just not something that I’d put on my favorites list. 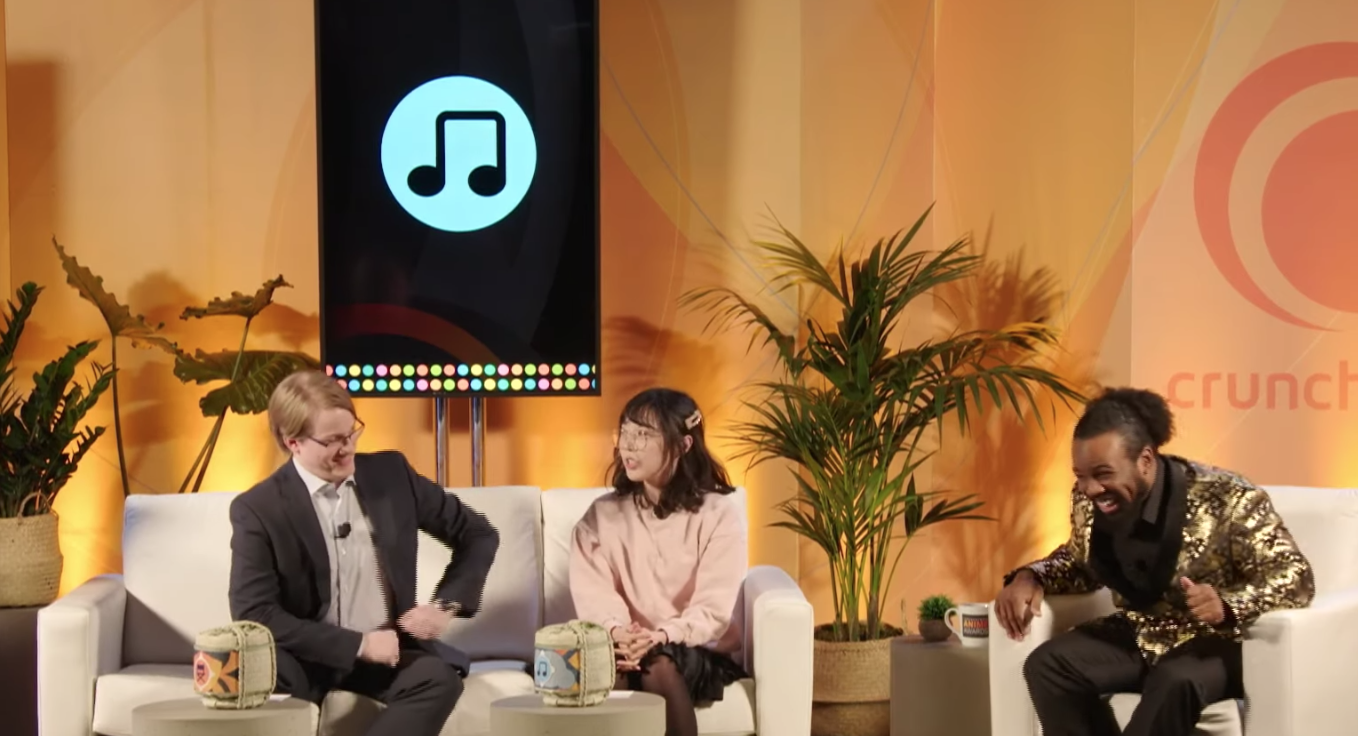 But yeah, I really can’t rag on this hate spree too much because it comes from communities that I find to be uninteresting and shit, and said communities are too small to really matter. It says something when I watch a livestream of the Awards show through Lost Pause’s Twitch stream (which can get annoyingly anti-SJW from his commenters at times) and am not even open to looking at Gigguk’s livestream or Digibro’s livestream or Manime Matt’s livestream or whoever else livestreamed that shit. Because I’m just tired of the information hunts and the elitism. I just want to have fun with this community, and it seems Noble and the big figures in the black anime Youtube community are the only ones who’ll allow that when I see things through their eyes – although Heavenly Controller is too busy with con stuff to even bother caring about the Awards show right now. Although Arkada’s and LilyPichu’s awkwardness when they had to present the awards was hilarious.

Also, can we get Projekt Melody as a host for the next Awards show? Because that’d be hilarious.

P.S. What happened to Geoff’s hair recently? It seems like it’s receding now. Isn’t the guy younger than I am?

10 responses to “So Do We Just Hate Demon Slayer Now?”