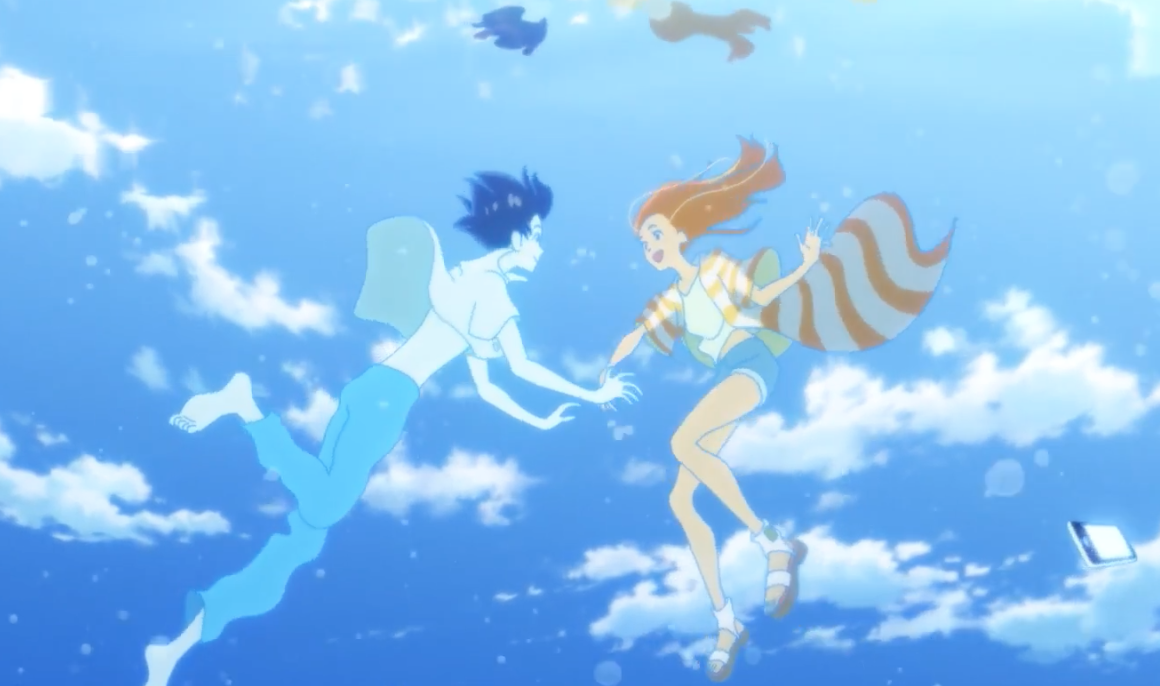 I thought I wouldn’t see an anime movie that could give Weathering With You a run for its money in a long time. I thought wrong.

So I just recently saw the new Yuasa movie, Ride Your Wave, and oh dear lord the movie made me cry inside (not physically because I’m always aware I’m watching fiction when I watch one of these dramas, especially if it’s animated). Seriously, I don’t think I’ve seen an anime that tugged on my heartstrings that effectively since the ending to Scum’s Wish, with the obvious difference being that Ride Your Wave is more of a traditional tragic love story except with anime magic. In fact, I’d go so far as to say that this movie is probably my favorite entry in the genre of tragic romances where death is involved. But why exactly does Ride Your Wave affect me so deeply you may ask?

After all, if you look at the barebones of the plot, it’s a story about two lovers who suffer tragedy when one of them dies and comes back as a ghost. Even if you haven’t seen many of these types of stories, you’d know where it’s going by way of common sense. As a ghost, the male lead (Minato) can’t touch his still-alive girlfriend and he’ll have to pass on to the afterlife sometime. And if the girlfriend (Hinako) didn’t move on, then her character arc would be terrible. It doesn’t have any unique twists like Weathering With You’s story where the lead decided to sacrifice an entire city to be with his loved one. So what exactly does the movie give us to make up for its predictability? 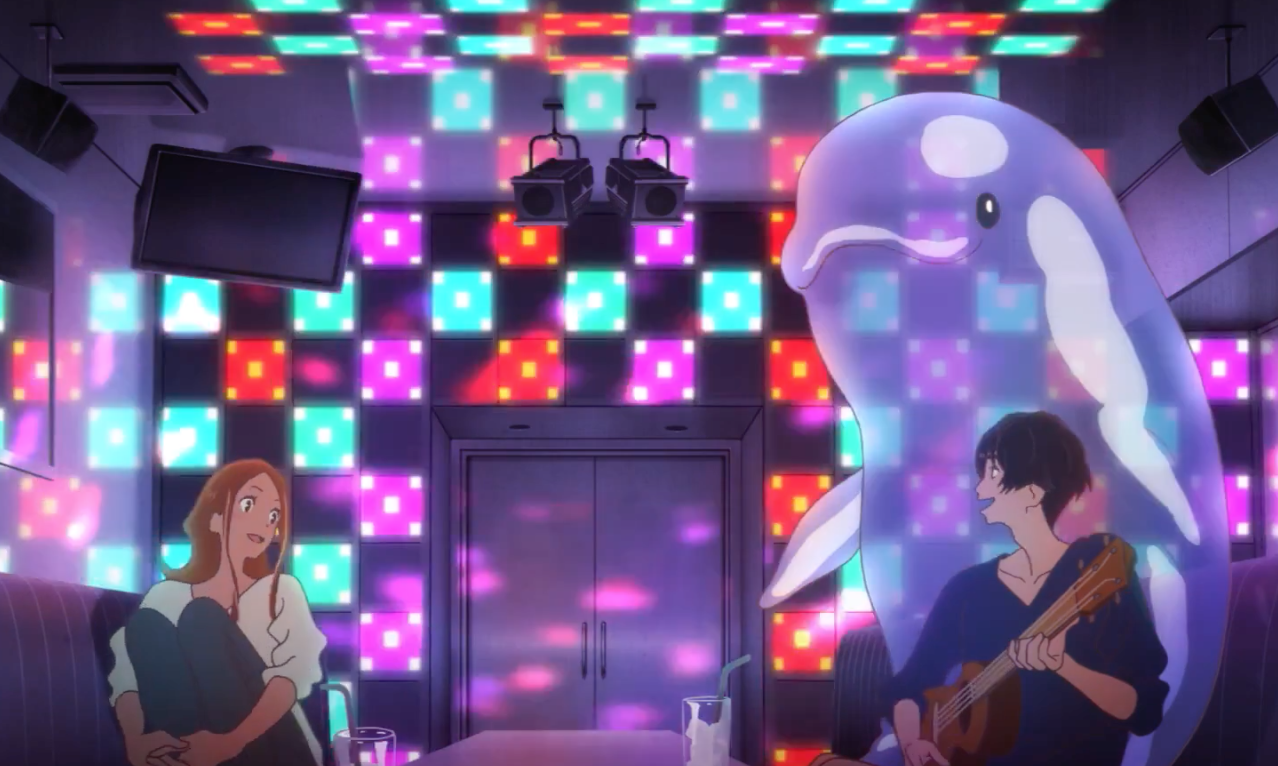 Obviously there’s Yuasa’s unique visual style, but he’s been around for so long that he doesn’t get any points for that anymore. What he does get points for though is using Ride Your Wave’s visual style to give us the anime version of Up’s first ten minutes.

I mean it’s not literally the opening of Up. But the moment I started to think that Ride Your Wave was an amazing anime was during a musical montage early into the movie where the main couple started dating and fell deeply in love over the passing of several months. Just showing random snippets of them going on dates, holding hands, kissing, laughing at various sea creatures, and making omurice for four minutes was enough to make me fall in love with the couple, not too dissimilar from how I cared about the protagonist of Up and his wife due to that montage showing the good and bad times of their married life. It takes real talent to convey such heartwarming wholesomeness like that, and while Shinkai’s usage of montages to convey growing attraction is good too, Ride Your Wave also conveys the passion of being in love with its montage.

Basically, the anime makes up for its predictable story by accurately conveying the feeling of being in love with its artistry, as well as the grief that tends to come when you put a roadblock in front of the big happy emotions. You can see the eventual death coming from a mile away, and isn’t it just a coincidence that Minato happened to be the only person available to save someone from drowning on that cold day? But most people aren’t going to care that said drama is forced because A) all fictional drama is forced B) they’re heavily invested in the characters at that point C) the movie has established Minato’s personality as a determined dude who wants to save lives, so of course he’d die trying to save someone’s life, even if it’s not through his actual occupation (he’s a firefighter, not a lifeguard) D) the dark snow, sparse dialogue, and ominous music when Hinako eventually discovers Minato’s fate. 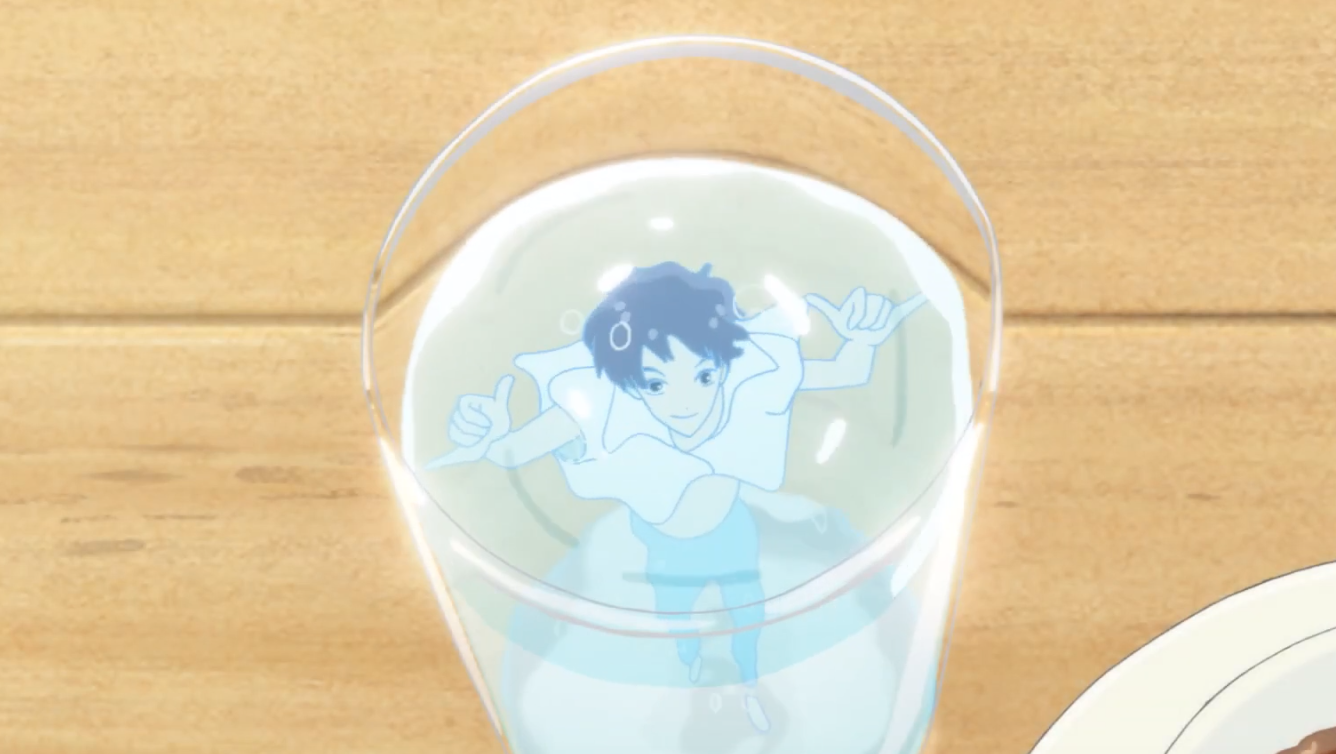 Not to mention, when Minato comes back as a water spirit, the animation and direction used to depict Hinako’s happiness at being reunited with him and coming up with ways to interact with his non-corporal body is joyful in a tragic sort of way. I know some people were disappointed he wasn’t just a figment of Hinako’s imagination, but I honestly have no idea how you could think that given the very specific set of conditions required for him to appear to her in the first place. Besides, this is anime. I thought having some unexplained magic was par for the course with this medium.

But here’s the thing: because so much of the movie’s appeal comes from how it tells the story and the only way to get the full experience (any less and the movie wouldn’t work at all) is to watch Ride Your Wave, it makes it very hard to actually discuss it. Or at least discuss it in a way that isn’t more cliche than the actual writing. The only real solid part of the movie that I can say boosts it in a writing standpoint are the two supporting characters: Wasabi, who is Minato’s best friend and constantly feels inferior to him for understandable reasons (because Minato is superior), and Yoko, Minato’s bratty tsundere sister who doesn’t open up to Hinako until after her beloved brother ends up under the sea. 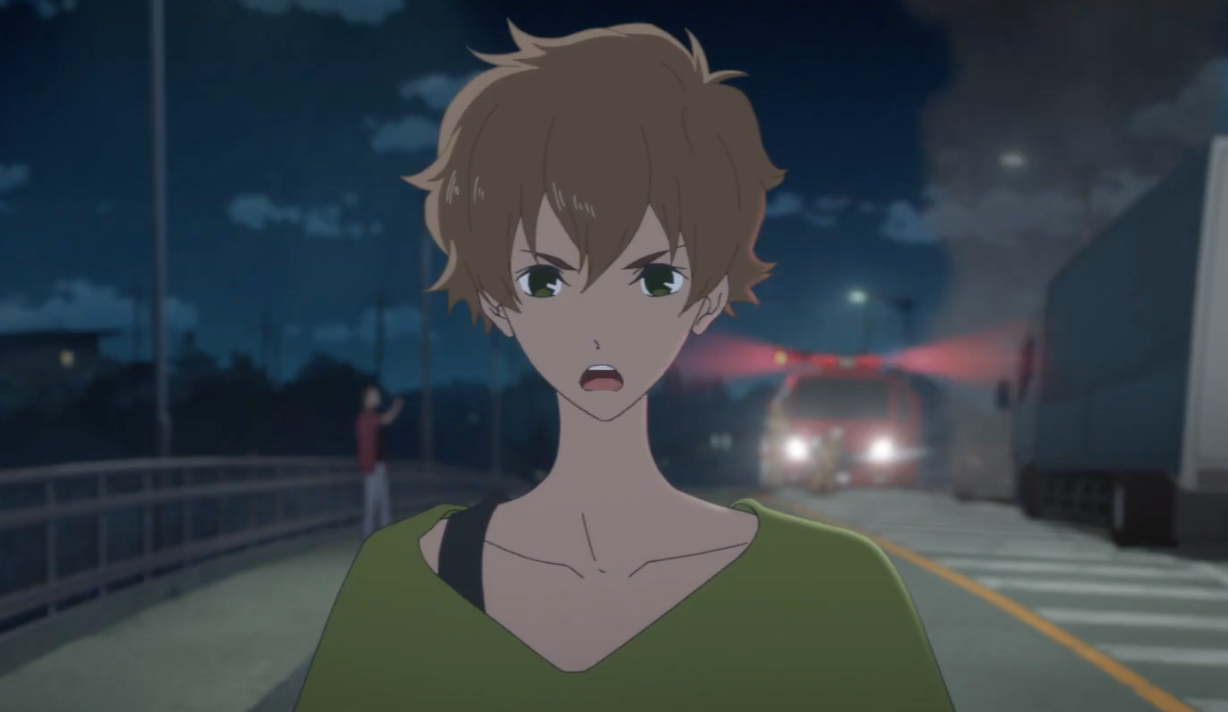 It’s nice to see the friends of the dead interact with the love interest in important ways while dealing with their own character arcs. Wasabi in particular gets a decent amount of screentime focuses on his insecurities, including his own crush on Hinako, which is dealt with in a very mature manner especially after his best friend’s death because without being too spoiler-ific, he learns to realize that because of said insecurities, he didn’t see the other better options that were available for him. Yoko doesn’t get as much focus on her introverted issues with most of her personal drama being tied into Minato’s own characterization as a guy who always worked hard until he mastered something, which is part of why she admired him a lot, but it’s balanced out by being just a funny girl with good things to say whilst never losing the tsundere side of hers. And by the end, she gets a certain personal ending with the only two important male characters in the film that’s really heartwarming.

As for the obligatory list of things I don’t like about the movie, the main song is decent and the main couple singing it during the montage was cute, but it’s repeated so many times throughout the film’s length that I ended up getting sick of it by the end. And…that’s pretty much it honestly. Like I said, it is so easy to predict where the plot is going to go, including a certain childhood history between the two leads, and anything that isn’t predictable at first gets predictable about one minute before it actually happens. But while Weathering With You definitely had the better story for me, because anyone who says they saw where that film was going to go was obviously spoiled ahead of time, Ride Your Wave’s emotional storytelling just resonated with me so much that I feel complaining about it would be nitpicking. 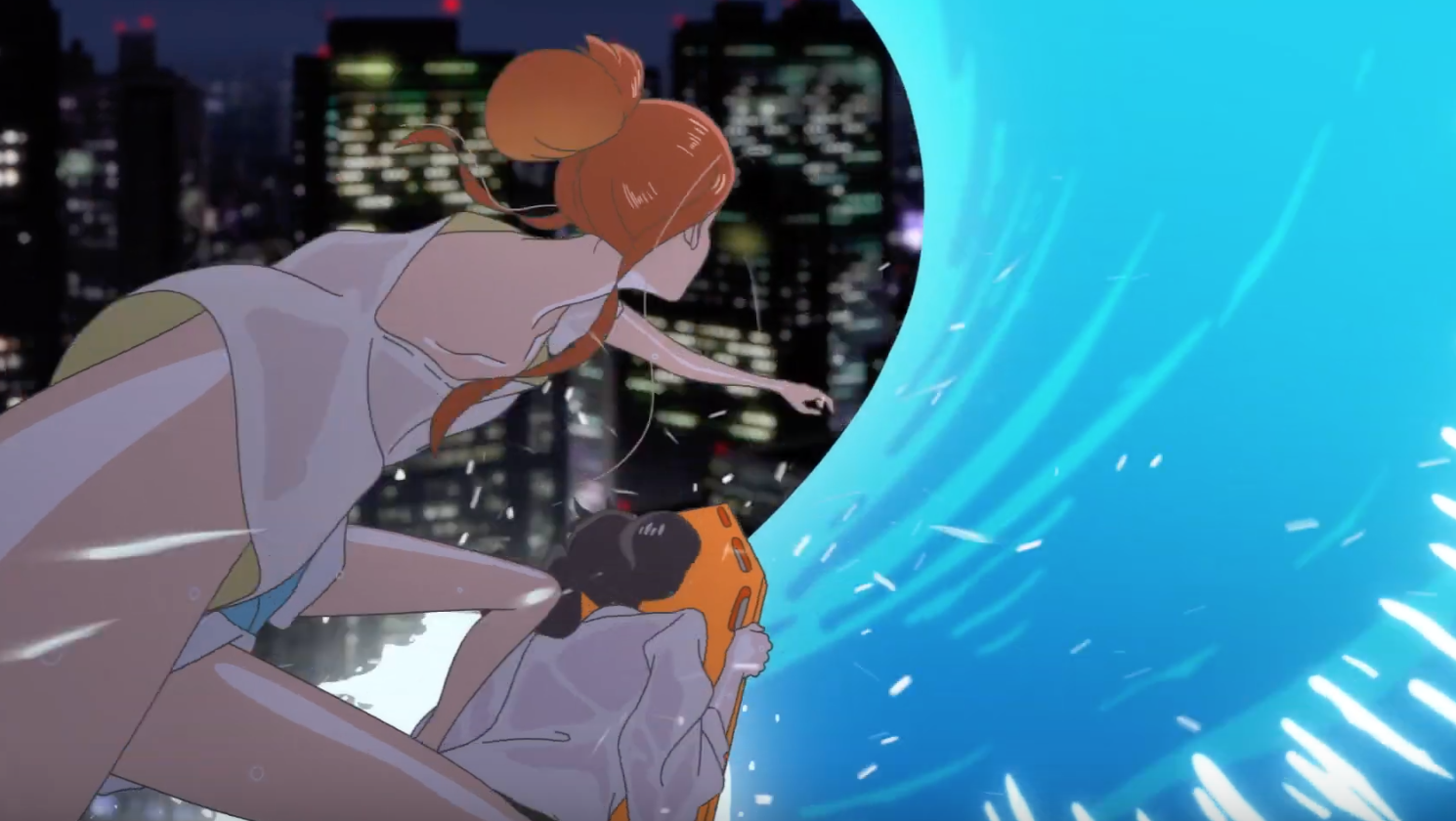 It’s a movie that you can review and several people have, but all you’ll get are just surface level descriptions of “how to deal with grief” that you could see in a lot of other stories for the most part. When it becomes more wildly available, you could make a Youtube video with the footage to describe why certain scenes work, but I personally believe Ride Your Wave is one of those movies where you have to take every single frame into account (or at least 90% of it) to showcase why it’s such a good movie. Basically, what I’m saying is that you can only understand why Ride Your Wave is amazing if you watch it yourself. And when you eventually do, hopefully you’ll understand why I have such a hard time actually explaining its appeal.

P.S. The subtitles at my screening were complete shit, but since that’s theater-specific and will most likely be fixed in the blu-ray, I didn’t think it was worth mentioning.