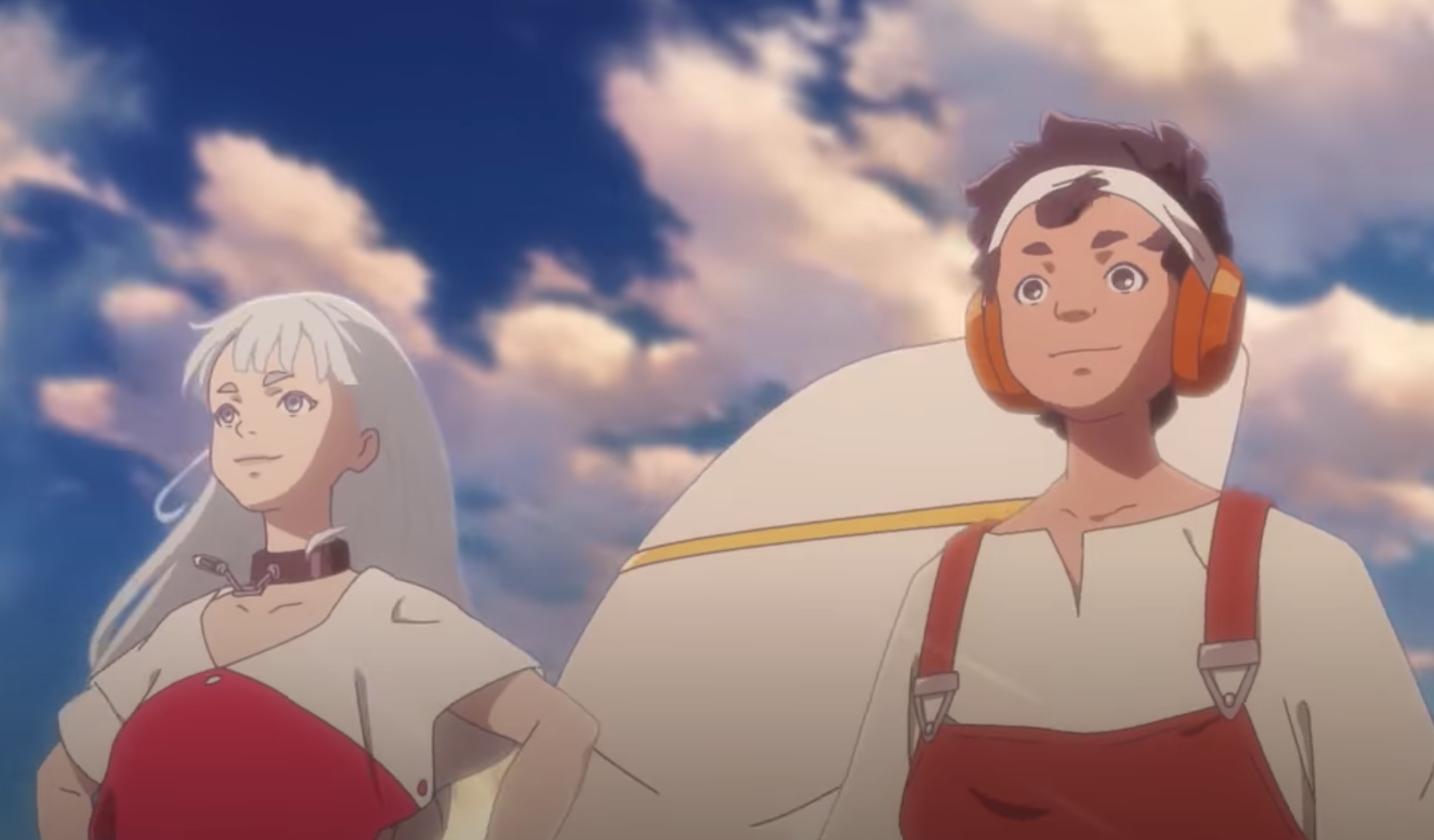 A lot of people are in agreement that Listeners is not a good anime, but I don’t think a lot of people really understand why the show isn’t hitting the mark. If you’ve ever watched Gigguk’s recent seasonal impressions video, he basically just listed a bunch of generic criticisms you could label at any anime (forgettable characters, weak mecha action, writing isn’t good, etc.) and unfortunately I haven’t seen anyone else do a better job at digging into the show’s weaknesses. Occasionally you’ll see people blame the writer, Dai Sato, for once again having the writing skills of someone who says with a straight face that the last few seasons of Game of Thrones were amazing – and while that is true, it’s not great criticism to focus on the writer specifically, especially since most anime fans don’t give a shit about who actually does the writing in an anime.

Here’s one thing I really don’t like by the way: people wanting to give this show a chance because it reminds them of Eureka Seven, which this series basically is trying to be. It has the same writer, a similar style, musical mecha, and a lot of references to real-life musical stars. I’m sorry, but why on earth would you ever trust a show trying to be Eureka Seven, a series whose overarching main story outside of Renton’s underdog tale was complete garbage? And since Echo is basically just Renton without much character or progression to him, we’re just left with the shit story? It’s like how without the cool action scenes, Final Fantasy VII: Advent Children would be a total waste of time because the story was pretty whatever and the dialogue was a bit stilted, even in Japanese. 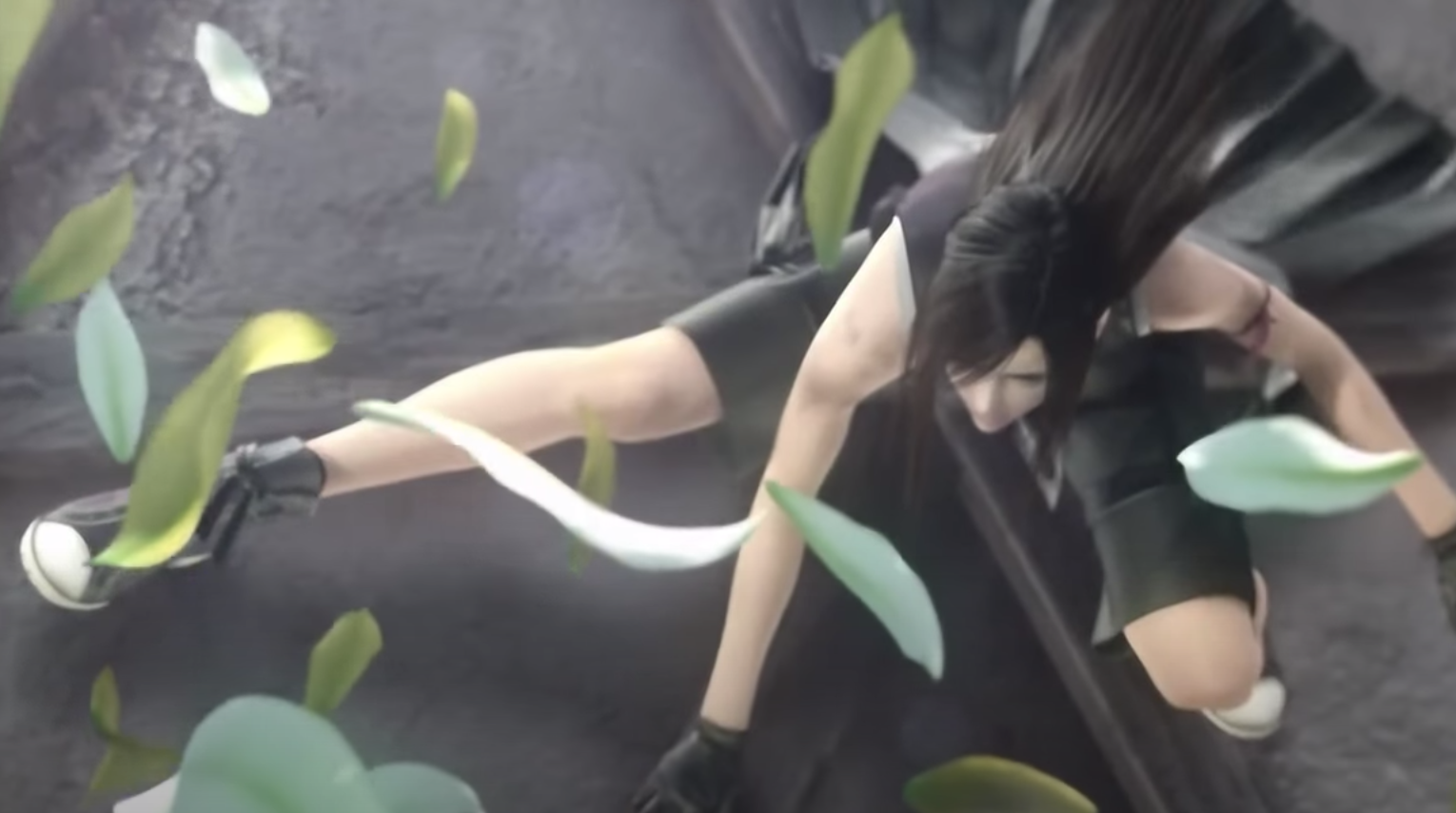 But most people don’t really watch Advent Children for anything more than fanservice and pure entertainment, and on that front, it does deliver for the most part. And I think that’s the main thing that’s both appealing about Listeners and what’s holding it back: it’s nothing more than pure entertainment. Or to be more accurate, it doesn’t have much more inspiration than basically being a rock tour with a vague mecha-related threat in the background. The series is episodic and four episodes in, each episode is basically the two lead characters running into the characters of the week, said characters are big into Jimi Stonefree and the musical world as a whole, interacting with them in a way that will always result in a mecha fight, solving the issue (weakly), and not being very funny in the process. Seriously Echo, how can you not tell that the blonde student you made friends with was a girl just based on her voice? Oh wait, this is anime. They need cleavage or it could just be a feminine sounding male.

That’s basically the formula and while it’s not appealing to me, I do get it. Listeners just wants to be entertaining. I don’t know if that’s what the creators intended for the show, but that’s what it’s coming off as. It doesn’t really care much that we don’t learn anything interesting about its lead characters or that outside of the references, we’re not getting an interesting viewpoint on rock music either. It just wants to be a rock music showcase with some references to things that do happen in the world of rock like drugs or breaking up the act. As long as we’ve got mecha action and interesting looking visuals/set pieces, who cares that we’re just using them in the most basic of ways? What? Don’t compare us to that Rolling Girls anime that no one remembers anymore! We’re better than Zombieland Saga, bitch! 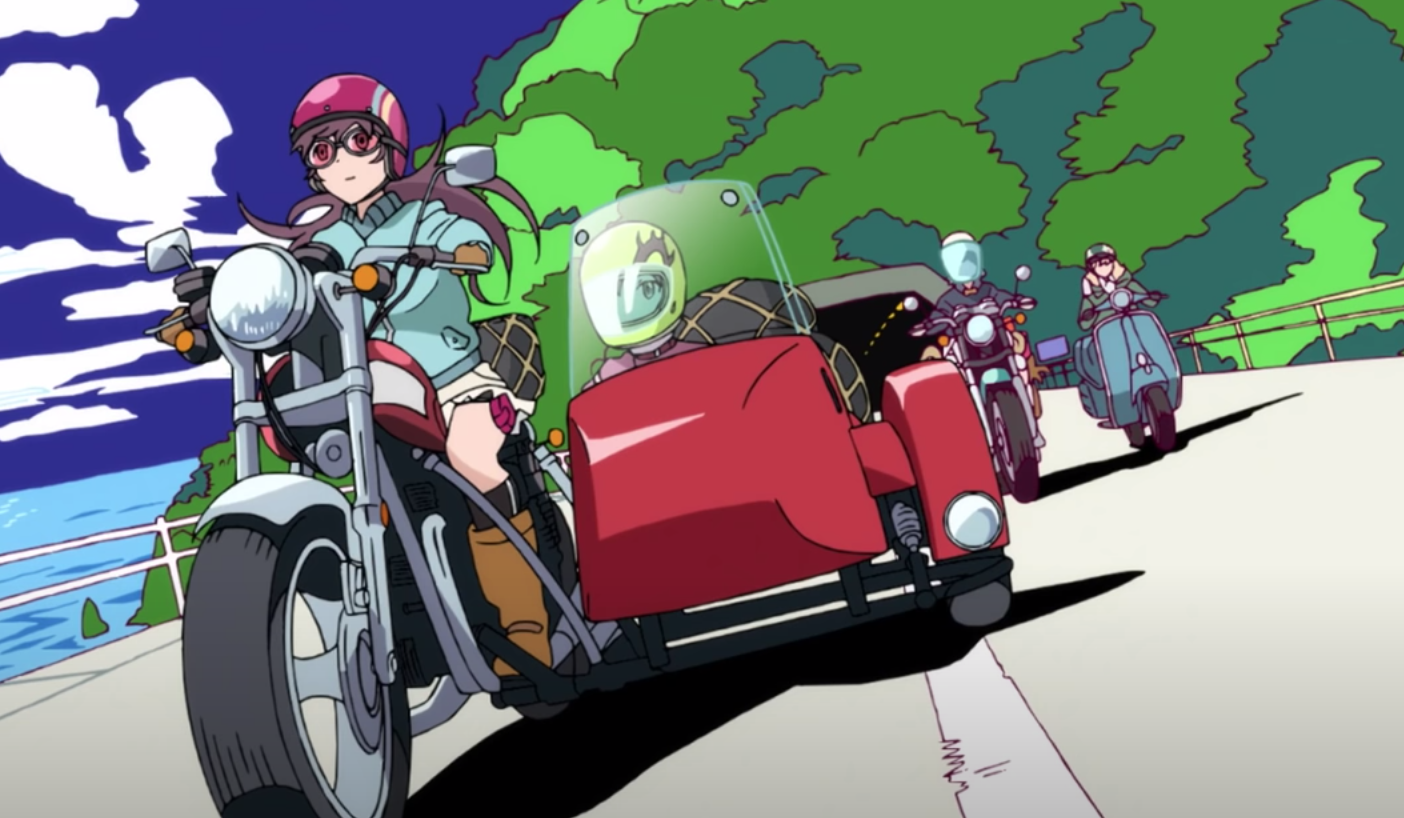 Obviously, the fact that it’s basing all of that entertainment around a subject that not many anime fans are actually going to get is hurting its reception. Mecha in of itself is a dying genre that’s had a hard time appealing to today’s shonen-obsessed market, but it would help if your fight scenes weren’t clunky CGI garbage. And it’s not like there’s much overlap between the world of rock and anime to begin with either. Lots of people liked Beck: Mongolian Chop Squad back in the day of course, but again that was mainly due to the main character’s growth while the rock stuff was just kinda supplementary. Rock trivia just doesn’t come naturally to the average person who watches these cartoons.

Watching things purely for entertainment is mostly something you feel, which is why it’s hard to really quantify, kinda like Youtube Poop. I definitely enjoy a lot of things for the entertainment value alone, like several Disney movies and several action/sex films. Hell I think Tower of God and Gleipnir are entertaining, but I’m not going to pretend there’s anything more to them at the moment but fun action spectacle. Generally, those kinds of things are carried by humor, which in of itself is a subjective quality, but you can also be into something solely due to the visual wonder, whether it be the colors or the tightly choreographed action or how hot the woman that Johnny Sins is putting his big dick in is. So if you’re just open to enjoying the visual style of Listeners, which I think is pretty good, then I’d recommend giving it a try if you were turned off by all of the negative reception. 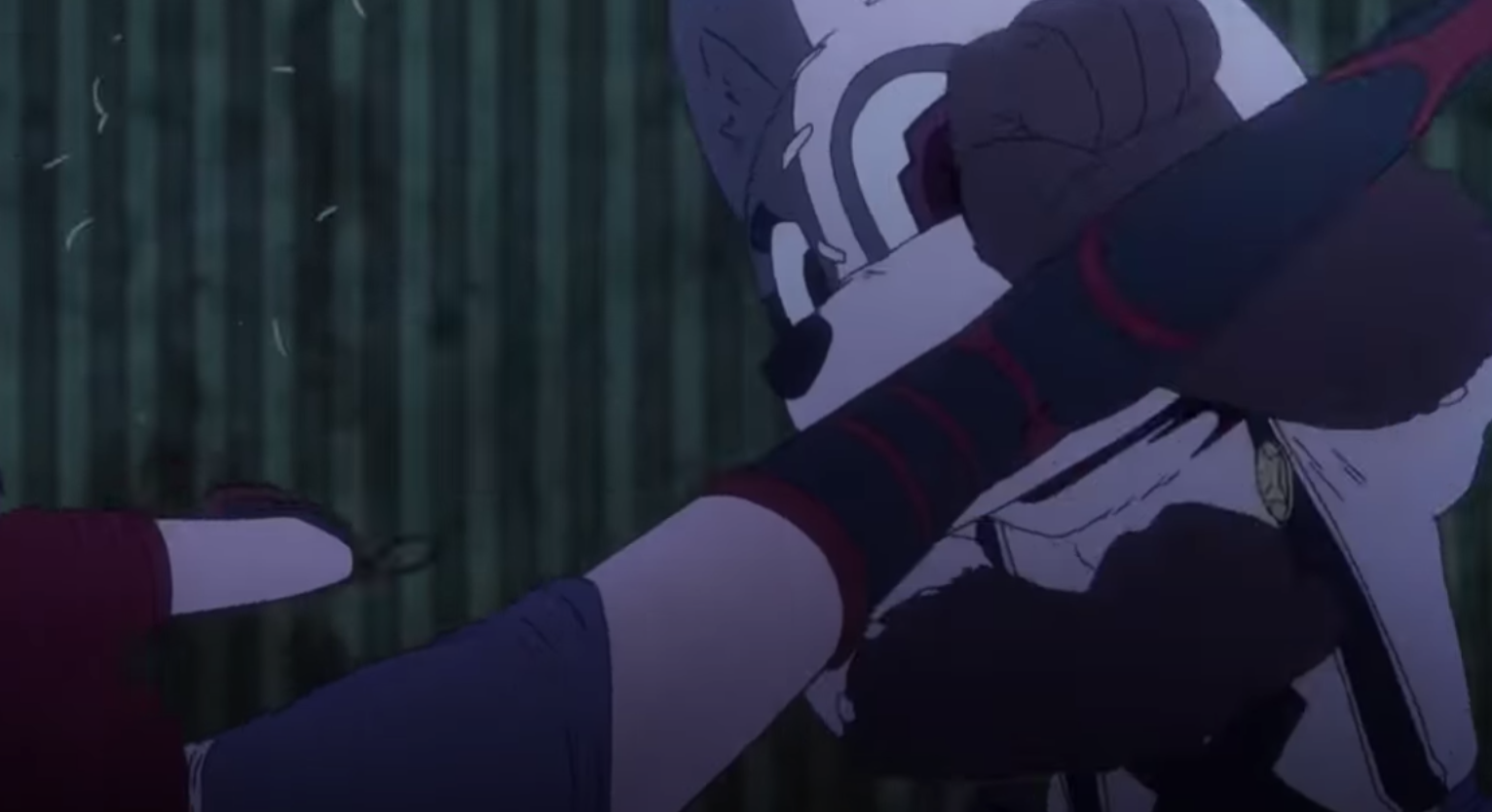 Of course, why would any sane person choose to watch something like Listeners when they could just watch Tower of God or Gleipnir for pure entertainment, especially considering they have much better action scenes? Hell if they weren’t delayed, we could get that with Appare-Ranman or Millionaire Detective too. In fact, a lot of anime this season are coasting on prioritizing entertainment over being a Vinland Saga-like critic bait, and they do it a lot better, so why waste our time with Listeners? Well first of all, just because a lot of people, let alone me, think they do it better doesn’t personally mean you would. Maybe you’re the kind of mecha rock fan that falls within Listeners’ demographic.

Personally, I can’t help you there. What I’m doing with this post is explaining the appeal of Listeners itself and the kind of entertainment it wants to be. Nothing else. If it doesn’t appeal to you, that’s your problem, just like how it’s my problem that I’m not personally enjoying it. It’s easy to recognize the appeal of watching something for being entertaining, but explaining why one works while another doesn’t on that front is such a case-by-case basis that the idea of even generalizing such an appeal is more of a losing battle than not trying to gain clout on Twitter. Or the Japanese trying to convince people that Ghost in the Shell can still be relevant in today’s world.