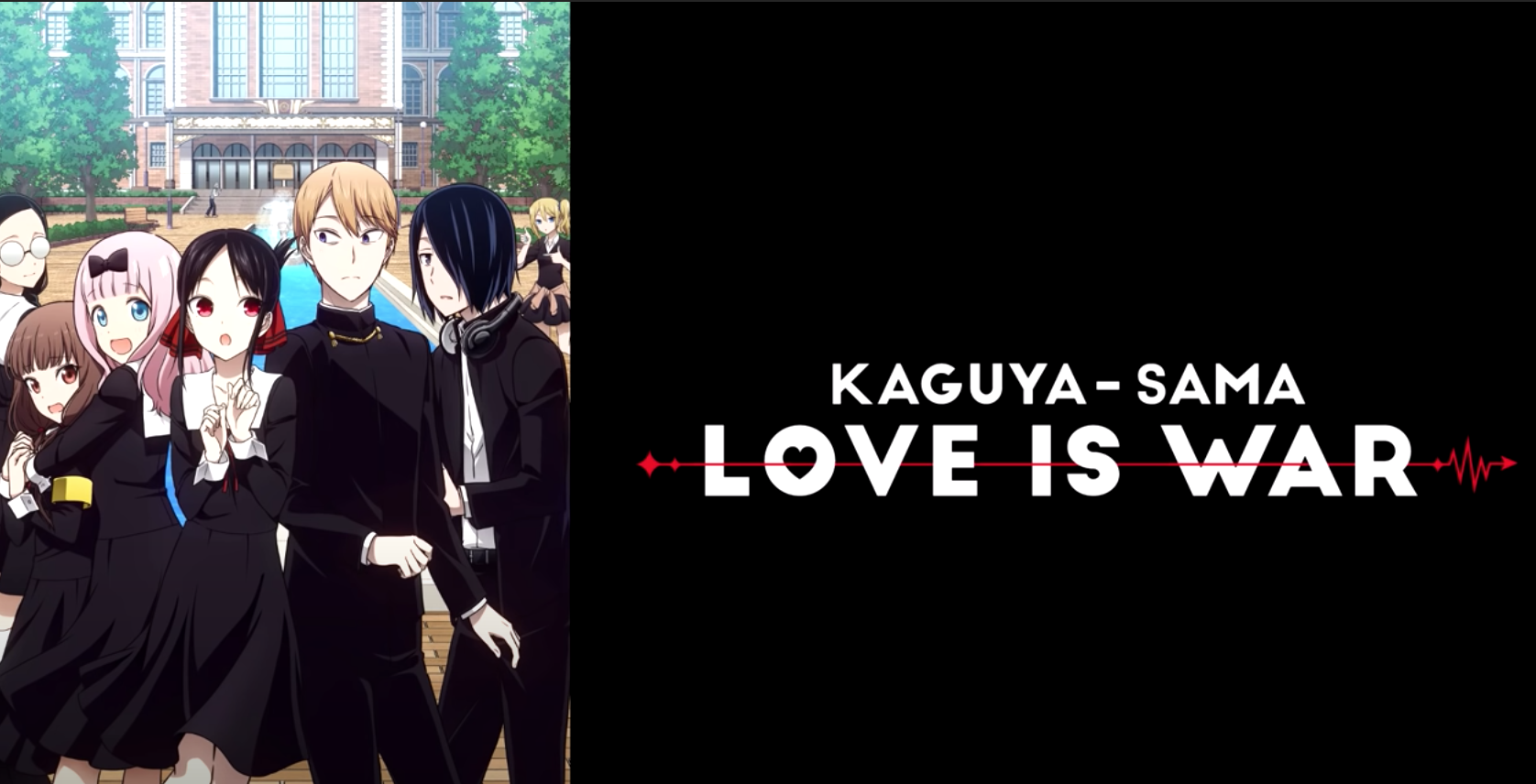 I know it’s from a seinen magazine, but it’s so indistinguishable from a romance manga I’d read in Shonen Jump.

After seeing the popularity that Kaguya-sama: Love Is War has gotten with its second season, the Tower of God fanbase might as well be the Brand New Animal fanbase – still noticeable but you’d have to go out of your way to find them, and be prepared for a lot of negative opinions in the process. With all the people who disliked the first season not even bothering to give the second one a chance, the show’s massive fanbase has been dominating quite a few online anime communities from MyAnimeList to making up almost all of the memes in the r/Animemes subreddit. About the only place you don’t see much activity regarding the show is nhentai. No Amagi Brilliant Park explosions centered around the main female protagonist’s tits there.

I’ve mostly stayed away from discussing the show because I’m one of those people who only enjoyed the first episode of the first season and thought the live-action movie that everyone either ignores or says is cringe was way funnier. But I was willing to give the second season a chance. A lot of anime were getting delayed due to the virus so it was pretty much the only big sequel airing in the Spring. And I heard from a ton of manga fans that the show gets better from where the first season left off, so I was kind of optimistic. Even if I wasn’t that impressed with the story getting better over time, it’d probably be interesting to discuss.

But you know what? Some things are just not meant to be. And now it’s borderline impossible for me to watch an episode of Kaguya-sama without abusing the fast-forward button. 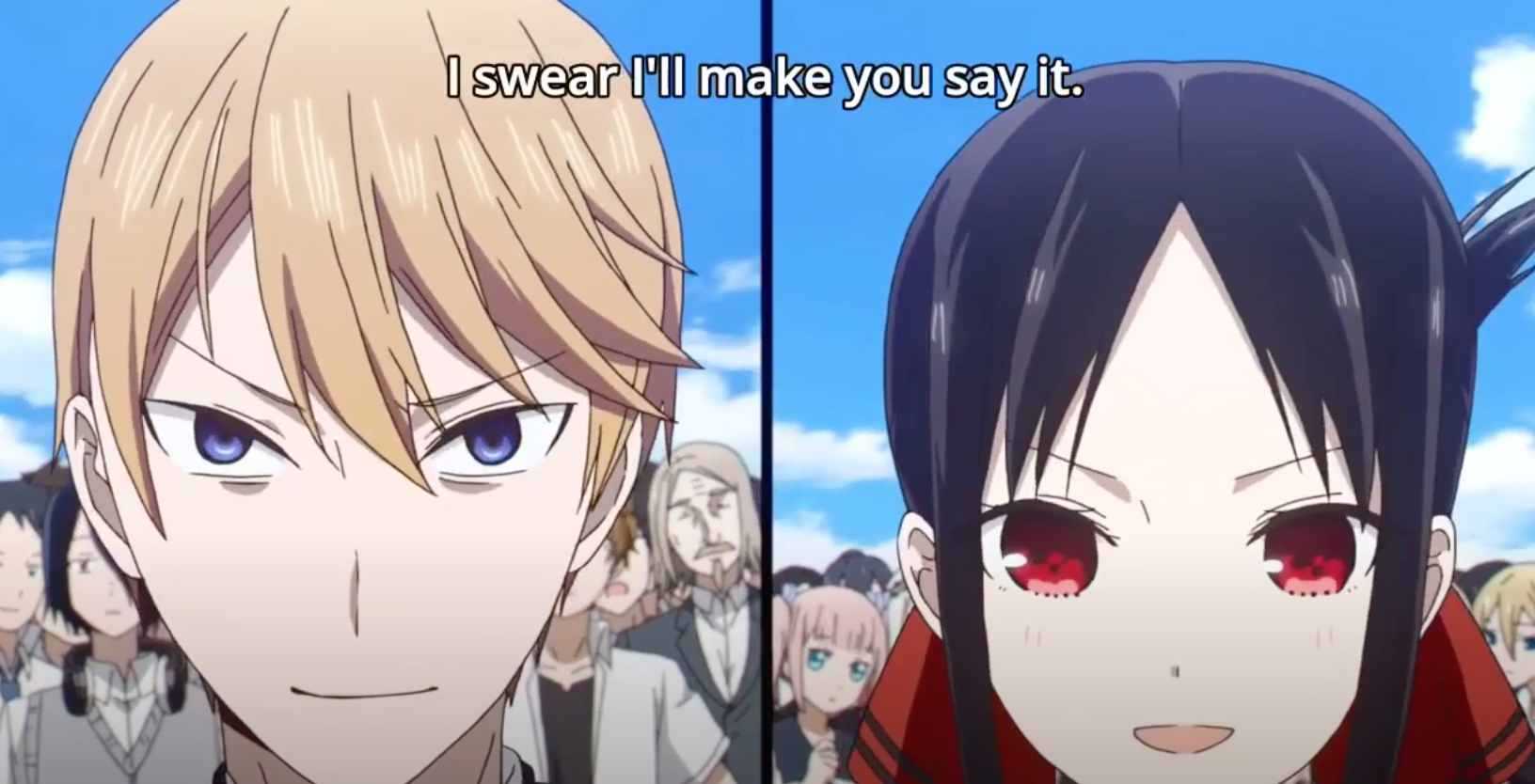 The show started off alright when it jumped right off of the finale to the first season where Kaguya basically pulled a Lum and declared that she’ll make her man say that he loves her if it takes an entire lifetime. We get a couple of skits of the characters reintroducing themselves to us through movie parodies and Chika being Chika before getting introduced to the new Masayuki Suzuki opening theme, which is of course a banger. Daddy Daddy Do may not be as good as the first opening, but it definitely has the more memorable line in my eyes and it’s easier to dance too. Given the state that 2020 has brought to humanity, I was onboard with this show trying to bring some joy into this dark period.

Sadly, the honeymoon period had to end and the longer I stayed with the show, the more I realized that the manga fans were once again miscommunicating with me when they promised improvements to the series. For example, I was promised actual character growth with this new season, but apparently to the fanbase, that meant cranking Kaguya’s blush-to-serious ratio up to eleven. Hooray, she’s more aware that she’s in love with Shirogane. That was totally worth an entire season’s journey to see.

What disappointed me the most was how the student council election arc was handled. It wasn’t very good in the live-action movie for the record, but at least it served a purpose I could get behind: Kaguya and Shirogane ended up running against each other because their love for each other combined with their stupidity lead to a campaign election that threatened to tear their feelings for each other apart. 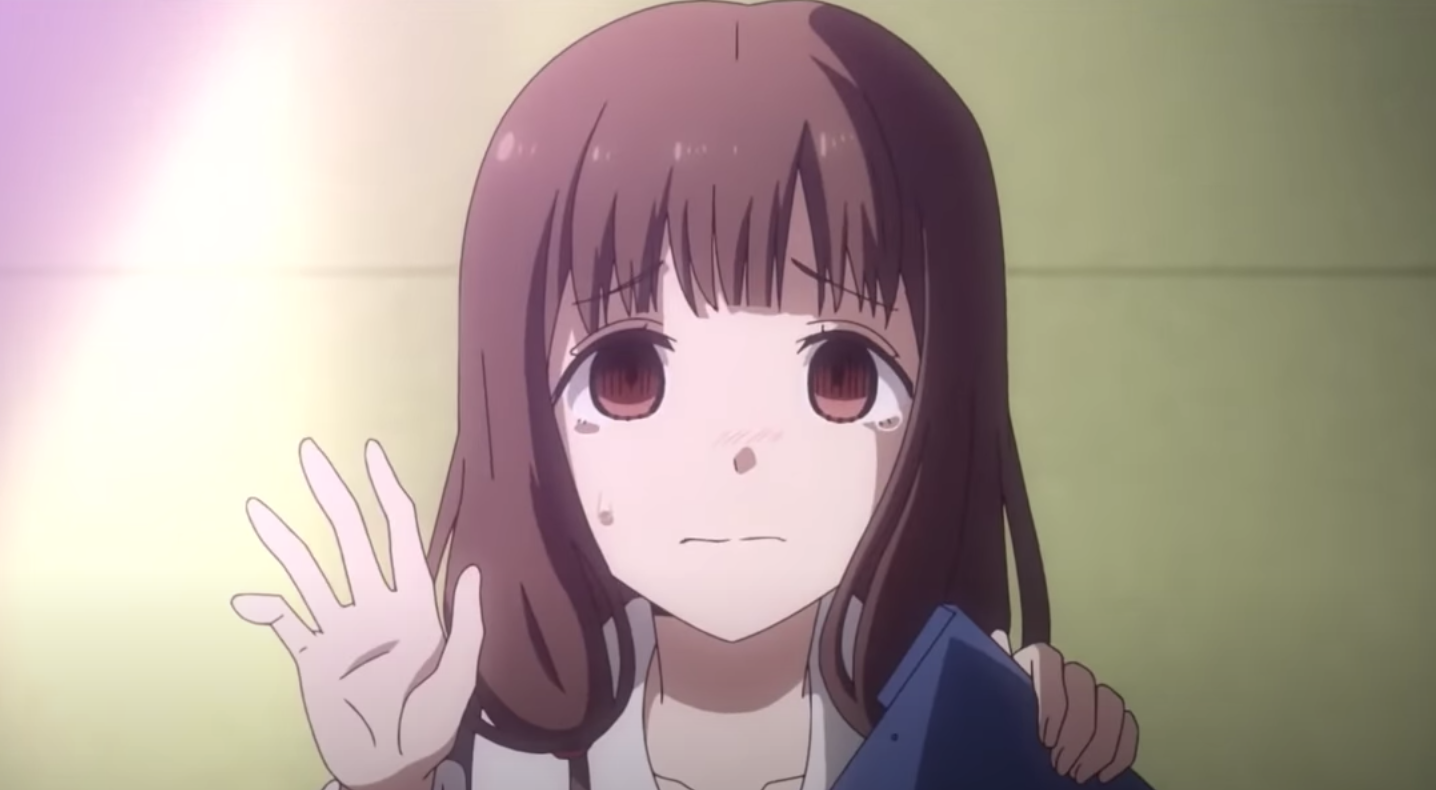 In the anime – and assumedly the original manga – it began promisingly with Shirogane seemingly retiring and Kaguya realizing she’d have to call the dude by his real name. But ultimately the status quo was restored and its’ only real purpose was to introduce a new character that I could not give a fuck about because her design is generic and she adds nothing interesting to the group’s dynamics other than calling them out for their stupid behavior like some neutered version of Yui from To-Love-Ru. Even her story was generic. Someone who wants to accomplish great things but is too scared to speak out clearly? Yeah that’s totally someone that sticks out in a cast that includes Ishigami.

So I tried focusing on the laughs that is the main reason why people can love romantic comedies even if they don’t go anywhere because the ride is just too fun, but unfortunately I barely got any enjoyment out of that either because just like the first season, the majority of Kaguya-sama’s style is Reddit humor. I’m still not sure what the appeal of humor that’s meant to be shocking in a manner designed to get upvotes is supposed to be, because it just comes off to me as some guy trying to look cool but ending up looking stupid in the process. At least with stuff that’s supposed to be cringe, the contrast is so big that it ends up being downright hilarious. 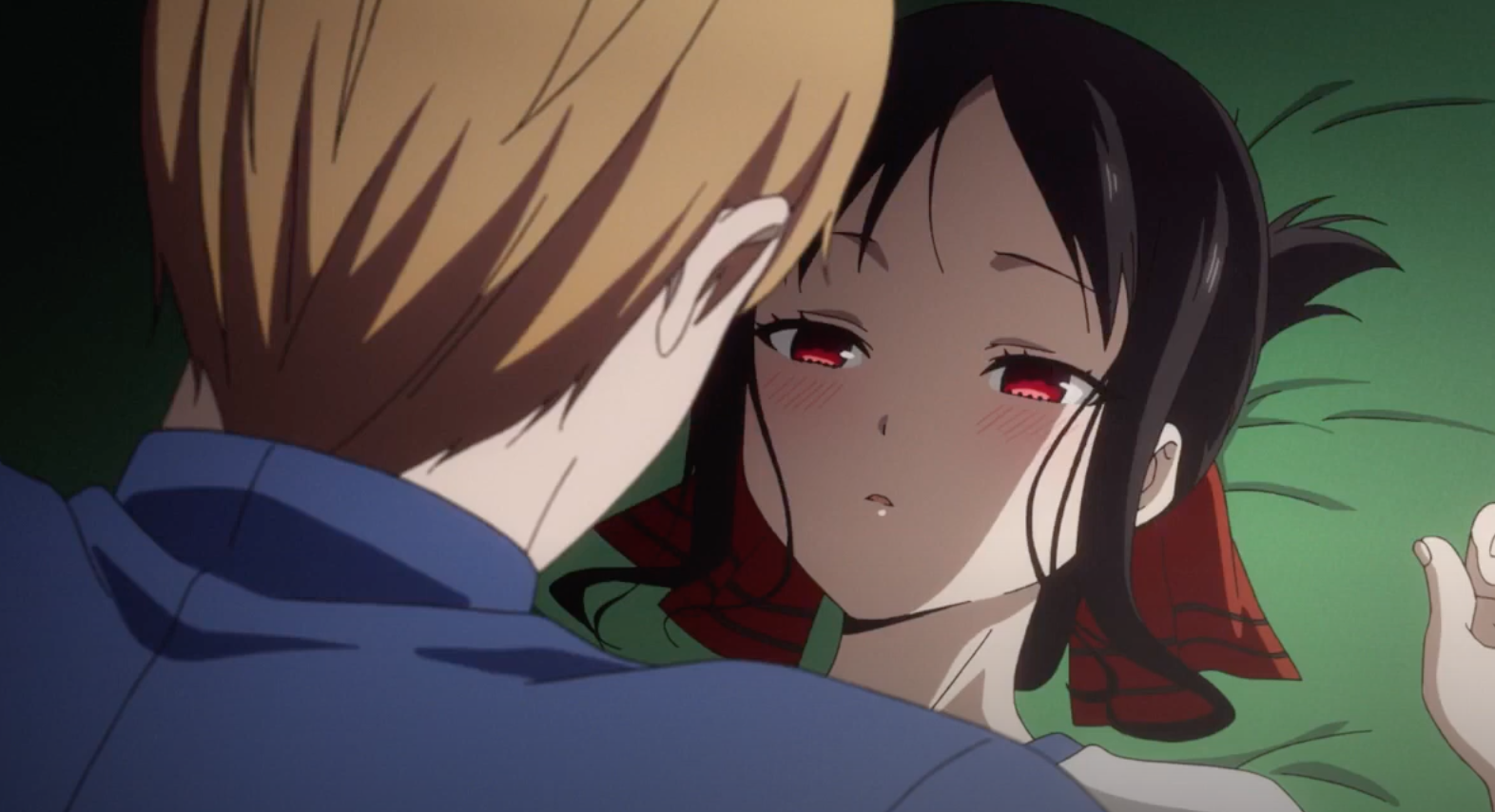 I think the only time I ever chuckled at the show was that one skit where Shirogane and Kaguya get stuck in a gym storage room and think the other person set up the forced scenario. The way it ended was kind of anticlimactic, but it’s the one thing that’s actually unique about the show’s humor: when both characters are in on the joke and trying to rein supreme like they read too much Spy v. Spy growing up. When Kaguya is getting embarrassed because she liked Shirogane more when he looked drowsy or when Hayasaka decides to shift personalities to a cliched moe thot who made a meme out of a catchphrase that was already kind of a meme in the Danganronpa community, I’m just being self-aware that I’m watching one generic anime cliche trying to act like another generic anime cliche.

Obviously nothing is original and originality itself is overrated. Shonen Jump is the most popular magazine out there and despite its fierce competitive standards, most of the series that actually survive on there are the same formula in a different setting. But for a series that’s helmed to be a refreshing change to the romcom formula, I’d expect better execution than just every romcom cliche ever with the presentation trying too hard to make the cliches look cool. Even the fanbase is in agreement that most of the humor comes from the fucking camera angles and the fucking narrator somehow making the fucking embarrassing moments not stupid. 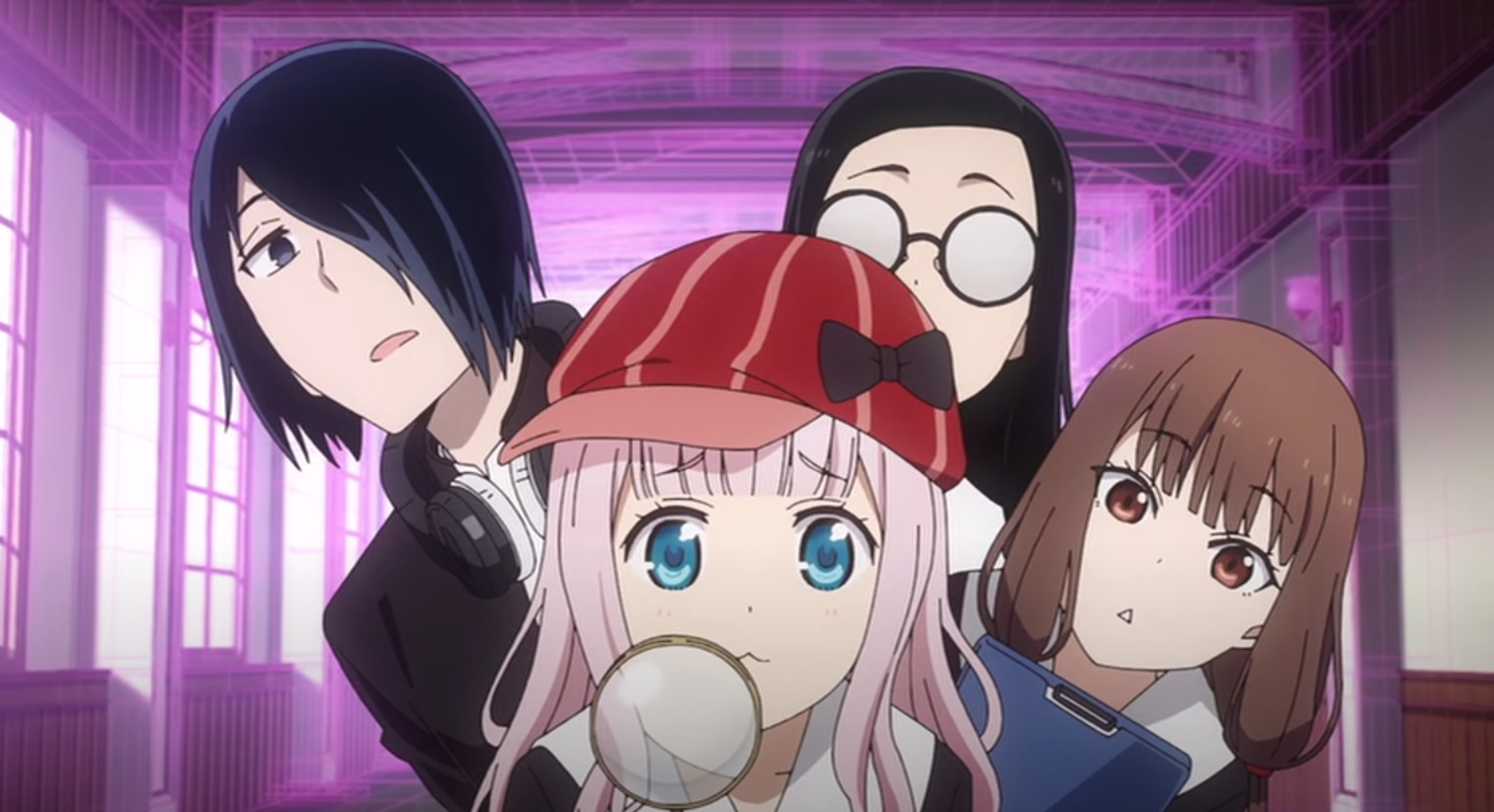 Yeah the way you present a joke is just as important as the actual joke, because that’s pretty much how stand-up comedy works. However, note that that implies the actual joke has to be important as well. And I don’t see how Kaguya imagining herself as a shoujo character is supposed to be comedy gold. Impressive drawing of the characters in a different style sure, and I get the joke is supposed to be that being shoujo does not fit their personalities. But when you think about it, shoujo is fucked up in its own way and it’s also full of will-they-or-won’t-they scenarios, sometimes between two tsunderes, so there’s actually little contrast or irony to get from that joke. Do you guys remember Special A? I’m trying hard to forget Special A exists personally, but it’s like Honey x Honey Drops in that its awfulness haunts me forever and I’m going to make sure you’re at least aware of it so you can read up on it and think to yourself “who thought this was a good idea?”.

I don’t like talking about anime that have yet to be finished because it tends to lead to dated judgments, but I realized my opinion on Kaguya-sama wasn’t going to be changing when they introduced the Shinomiya family doctor who diagnosed that Kaguya was suffering from lovesickness. For those who don’t know, this skit also showed up in the live-action film, except the doctor was a goofy idiot played by famed comedic Japanese actor, Jiro Sato – a guy who’s so fucking funny that every time he plays an anime character, I can no longer see said character as anyone but him. He played Henpeita, that shifty-eyed dude from the Benizakura arc in Gintama, and now I cannot look at Henpeita ever again without thinking he’s going to be making sounds like he smoked a dooby before getting on set. 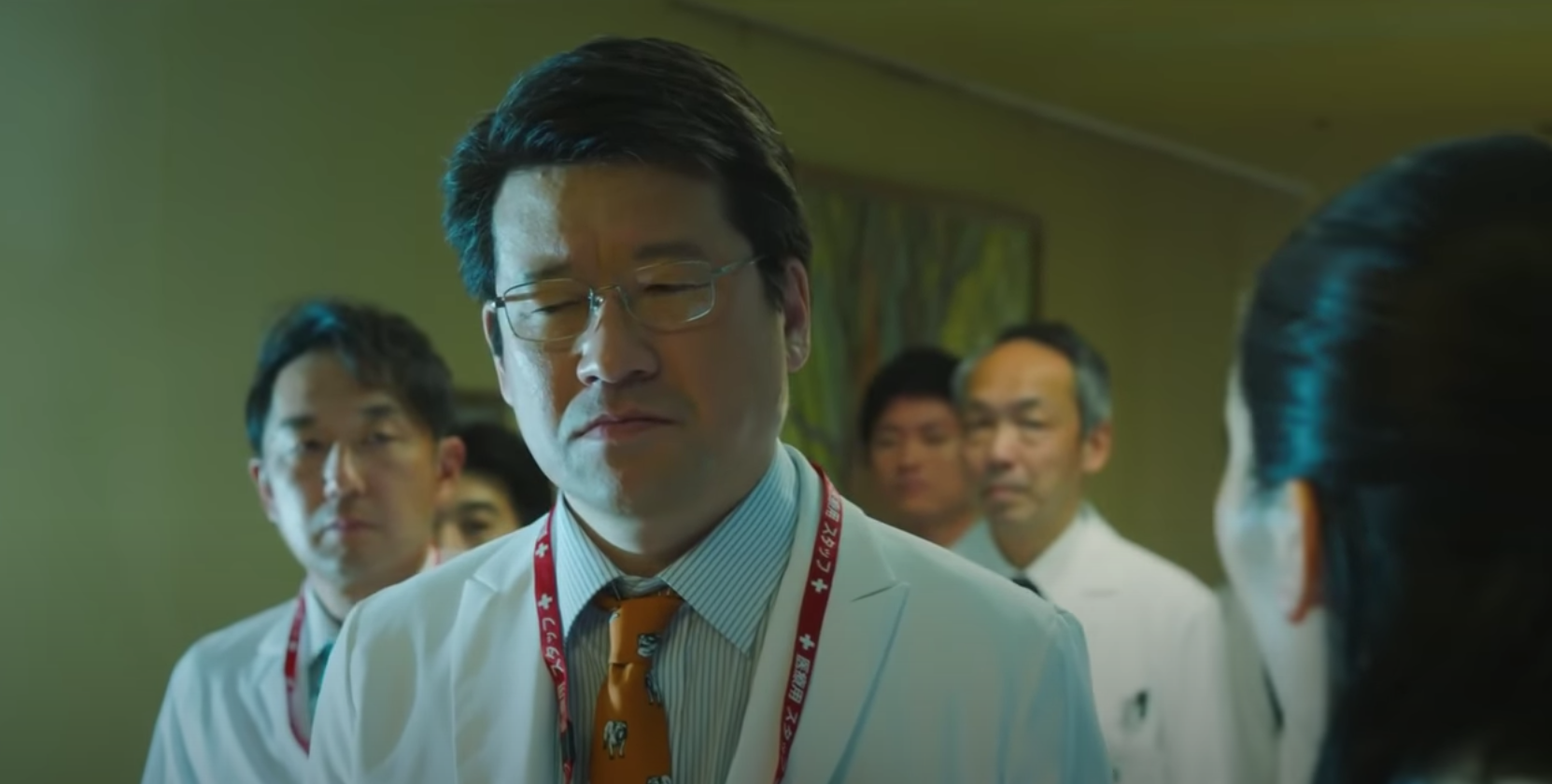 Similarly, I can’t look at the family doctor in Kaguya-sama without thinking he’s going to break into dance and start hurting other patients when they get in his way. Also, he was a much funnier narrator than the one the anime ended up giving us. I don’t get why I keep seeing people in Youtube comments sections memeing the dude, but then again, I don’t know why I read the comments in general. It’s so hard to find common ground with people who just hate the very idea of live-action adaptations, especially when the only bad ones they seem to know are the popular ones, which is like saying all anime suck because the only anime you watched were Eromanga Sensei, Goblin Slayer, No Game No Life, and Sword Art Online, and they weren’t to your taste…

In summary, I couldn’t get much enjoyment out of Kaguya-sama’s second season because the characters are still exaggerated anime stereotypes that are almost impossible to relate to, and the romance doesn’t go anywhere because apparently we’re still stuck in that mindset that the chase is the most exciting part of romance. Which might have been tolerable if the show had any self-awareness regarding the fact that at its core, it’s a pretty basic romcom about two tsunderes in love with each other. Even the live-action film had some with that hilarious ending skit where (spoilers, but the fanbase hates that movie, so they probably don’t care) Shirogane and Kaguya kiss, get embarrassed, and then immediately think they’ve outplayed the other with their usual holier-than-thou attitudes. 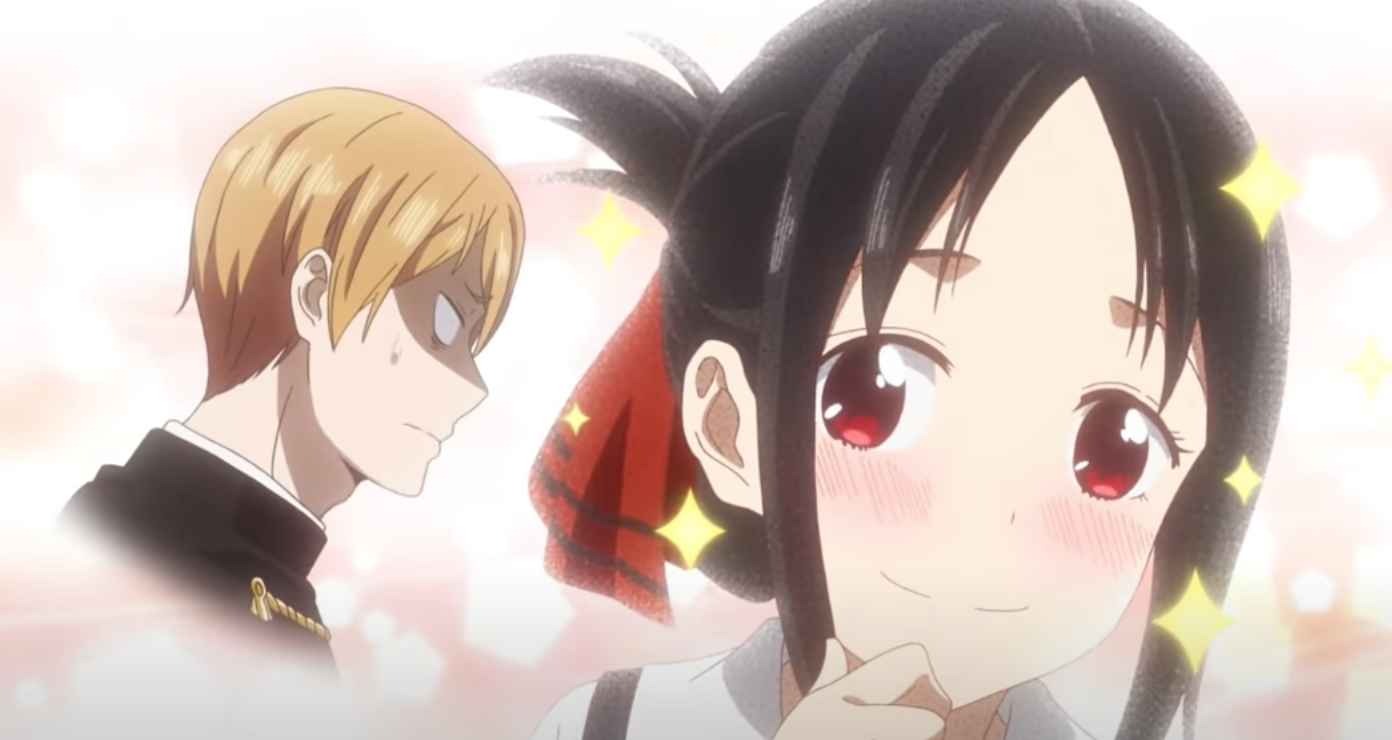 P.S. For the record, I am aware of what the current status of the main relationship is in the manga. You don’t need to tell me about it.

2 responses to “Kaguya-Sama: Love Is War Is Seinen? How?!”